Known as the biking capital of the world, or even a “cyclist’s paradise,” Amsterdam totals 767 km in bike lanes and paths across the city and sees an average of 2 million km cycled per day by residents. The popularity of cycling as a main source of transportation is aided by the city’s flat surface, dense population, and moderate climate. However, Gerrit Faber of the Flietsersbond, or Cyclists’ Union, states “it’s not what we have because of our [city] genes. We built it — and other cities can, too.”

There was a time when cyclists were under severe threat of being completely expelled from Amsterdam and other Dutch cities because of the growing number of cars.

When Amsterdam was a car-loving city

During the postwar era when the Dutch economy began to boom and residents were more financially capable of purchasing and owning cars, urban policymakers believed cars were the travel mode of the future. To accommodate them, entire neighbourhoods were destroyed to make way for automobile commuting, parking, and traffic. During this time, biking began to decrease by 6 per cent each year and the idea was for bikes and cyclists to disappear altogether to accommodate the growing car culture. 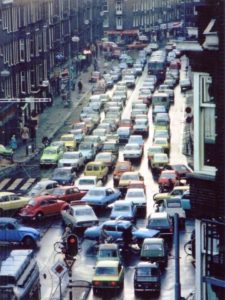 Street in Amsterdam in the 1970s. Source: Brent Toderian.

As a result, the streets of Amsterdam were no longer a place for the people who lived there, but a place for cars, carbon emissions, and huge traffic flows, says former Dutch MEP, Maartjie van Putten. It wasn’t until the 1970s that the city began investing in cycling infrastructure due to the unacceptably high death rates of cyclists and pedestrians. In 1971 alone, it was reported that 3,000 people were killed by cars, 450 being children.

This deadly trend led to protests from different action groups. Stop de Kindermoord or “stop the child murder,” led by van Putten, was one of the biggest. Van Putten was a mother to a young child during the city’s bustling car era and saw how many parts of the city were torn down to make way for traffic lanes and other forms of car infrastructure. “I was very worried by the changes that took place in society — it affected our lives,” she says.

After protests consisting of residents biking up and down streets and cycling to the house of the prime minister, Joop den Uyl, the Dutch government decided to financially support Stop de Kindermoord, subsidizing the organization and collaborating with them to develop safer urban planning initiatives. 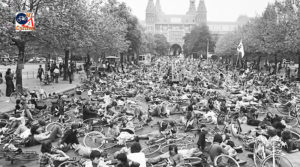 Forty years of urban planning and policy work led to the Amsterdam we know today. Although it didn’t happen overnight, the demand from residents and the active leadership of the Dutch government led to a civic and government collaboration that turned a car-loving city into a world-leading example in bike infrastructure for other cities to follow during a world bike boom and the climate crisis.

There’s a bike surge, but little to no bike infrastructure

Since the pandemic first hit, the bike industry has experienced a huge increase in demand in North America. This may be due to people working remotely, worry about public transit, and a surge in outdoor recreation as indoor activities and businesses limit public contact.

Market research firm NPD Group reports sales of bikes increased by 75 per cent in 2020 compared to 2019, and it’s only gone up since. The first two months of 2021 saw an increase of 130 per cent and, although findings on the demographics of demand aren’t clear yet, one in 10 American adults report they rode a bike for the first time in over a year since the pandemic began.

Cycling has always been an alternative mode of transportation, though the increased interest and demand in bikes paves way for cycling to turn into a dominant form of transportation. Especially in response to the ongoing climate emergency, where cars and SUVs make up a large percentage of Canada’s greenhouse gas emissions, contributing to the global carbon emission crisis.

Although Amsterdam’s transition from a car-dominant to a bike-dominant city may seem overwhelming, the city proved it is possible and rewarding, and other leaders can follow, too. 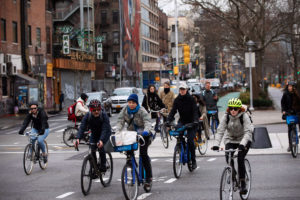 How did Amsterdam make the transition?

Although the city took a handful of individual measures and actions like Car-Free Sundays, speed-bumps, and bends, these four areas are what really made the difference:

In a densely populated urban area, like most cities, cars take complete ownership of space, making vulnerable pedestrians and cyclists inherently less safe. The city began creating new policies around sustainable mobility to prioritize pedestrians’ and cyclists’ safety, with a new traffic liability law that holds “the person who is driving or in the most harmful vehicle at fault in 99 per cent of crashes.” This implication insists riders’ safety is a priority by making drivers more aware of their surroundings and incentivizing them to cycle.

Although some cities mimicked the Netherlands’ white road lines that indicate bike lanes, this was only Amerstam’s first step towards prioritizing rider safety. Frans Jan van Rossem, a civil servant specializing in cycling policy in Utrecht, another Dutch bike-dominant city, says “a line on the road is not enough. Motorists will ignore it.” For riders to feel safe, safety needs to be built within cycling infrastructure. This does not mean painting white lines and wearing bright colours and a helmet. Van Rossem says the main reason people do not bike is that they don’t feel safe. To begin, separate bike paths from traffic lanes. 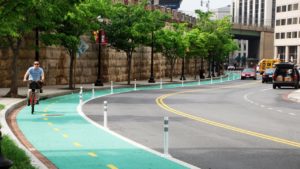 2. Amsterdam’s bike lanes are an interconnected network along roads and the transit system

Lucas Harms, who leads the Dutch Cycling Embassy, says cities often take fast action creating bike lanes “without thinking it through very well,” meaning, cities build small pieces of bike lanes starting from “nothing to nowhere.” This lack of connected infrastructure forces cyclists to either ride in undesignated bike lanes creating a safety issue, take longer routes to connect to a bike lane, or not ride at all.

Instead of having scattered pop-up bike lanes that lead to a halt, Amsterdam has connected their bike network over more than 767 km. This may be a challenge for cities to build as they already have an urban planning model between roads. Though, making paths “feed into one another should be prioritized in order to keep riders safe and infrastructure contained.”

Utrecht connects cyclists by having a bike lane present anywhere throughout the city within 200 to 300 metres. This gives cyclists the accessibility, safety, and incentive to bike instead of drive.

Additionally, Amsterdam’s bike network is 100 per cent interconnected with the city’s transit system as bike parking garages are popping up around the country situated right next to train stations. Right now, the largest one is in Utrecht, sitting at three stories high and housing over 12,500 bikes. An extra benefit to motivate residents to bike to train stations is free parking for the first 24 hours, following a rate of €1.25 for every day after.

Not every city needs to build large bike parking garages to be bike-friendly. Because the city’s bike infrastructure was so successful and attracted so many riders over drivers, the city experienced a “sprawling clutter of bicycles…overwhelming limited parking spaces.”

The city’s initiative in building more bike parking infrastructure demonstrates the government’s attention to civic bike demand. Other cities can too by picking up on their own city bike trends. 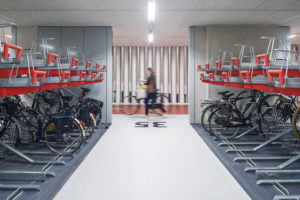 3. The city is designed for reduced-speed and short residential commutes.

Most roads in both Amsterdam and Utrecht have a 32 km/h speed limit, forcing drivers to slow down. Also, the majority of streets do not need stop signs as speed bumps and directional signs help drivers navigate safely. Additionally, cars must yield to cyclists who are also responsible for following the rules of the road. This is done to promote ridership and decrease the amount of circulating cars.

Again, this may not be a beneficial model for every city as each one has its own unique set of challenges, but, it’s important to note these transformations have been made possible over the last forty years as bike culture in these cities has become part of a “casual culture.” Whereas in cities that are car-dominant, it would not be safe to begin transforming transportation by removing stop signs. Rather, beginning to encourage more cyclists to use the roads with safe and accessible infrastructure like the improvements mentioned above will decrease the number of cars on the road and make cycling part of city life.

4. Mobility also needs to be equitable

In Amsterdam, bike accessibility for all users is prioritized, whether it be for personal use, sharing, or cargo. Since bike culture in Amsterdam is a normal way of life, negative perceptions related to race, ethnicity, gender, abilities, and economic status towards bike usage are less prominent.

Even prior to the pandemic, cycling infrastructure in other cities lacked diverse voices and treated cyclists of colour unequally. This is seen in most cycling infrastructure, where it is often built-in white, wealthy, and business-centred areas. This attempt to build a cycling network is typically aimed to “woo the kinds of upwardly mobile professionals who are attracted to areas with such amenities”.

This kind of thinking and planning favours a type of cyclist that officials, tourists, and even residents want to see, rather than favouring the type of cyclists who already depend on bikes as a low-maintenance and low-cost form of transportation. For example, a study in 2015 reported half of US cyclists had a yearly income of less than $25,000.

Not consulting and building cycling infrastructure accessible to all regardless of race, gender, economic status, and ability leaves out different perspectives and experiences and creates a wide gap in any cycle network.

For cycling infrastructure to be a successful primary or alternative source of transportation, cities need to consult, include, and prioritize marginalized individuals. 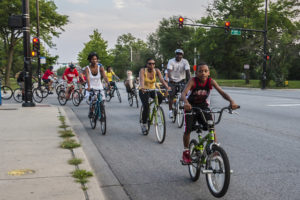 How can my city transition?

Although Amsterdam had support from city leaders and urban developers to make it the way it is today, the change began with civic demand.

Begin researching the environmental and community benefits of cycling to grasp why it’s important for the city to transition.

To gain an insider’s perspective, consider cycling as a form of commuting to understand what a cyclist needs to commute safely and often. Although it may be a bit intimidating to hop on your bike on a road of cars, consider looking into non-profit organizations that prioritize rider safety and city commuting like Velo Canada, Green Action Centre, PeopleForBikes, and The Bicycle Revolution.

Lastly, share your thoughts, ideas, and research with friends, family, and coworkers. Being a positive influence towards others in creating change is the best way to build civic demand for city leaders to build safe bike infrastructure, just like in Amsterdam!