The field of genetics is continually changing. Many revolutionary innovations have been introduced in the past that could change the world; such as in vitro fertilization, which allowed pregnancy to be induced in infertile women. But most of these technologies do not even see the light of day due to environmental, legal and bioethical issues that seem too extreme to challenge.

One technology, however, that has not seemed to succumb to these complications, is CRISPR (Pronounced CRISPER) –  a gene-editing technology found in 1987 in the most commonly researched bacterial species, Escherichia coli. The primary reason that CRISPR has remained a hot topic in the scientific community is because there are numerous uses, yet there are many costs associated with implementing CRISPR. Some potential CRISPR applications being researched include increasing crop yields, modifying the evolutionary path, and creating disease or pathogen-resistant organisms to treat certain diseases.

CRISPR is an acronym for clustered regularly interspaced short palindromic repeats. In nature, it is used by bacteria to defend against viral attacks. The repeats, called viral spacers, are integrated into the bacterial genome after an initial viral attack to prevent subsequent attacks from the same viral species. Collectively, the viral spacers integrated into the bacterial genome are called CRISPR RNA. The main components of CRISPR RNA include a CRISPR gene and the viral spacers. When the same viral species attacks again, the CRISPR RNA acts as a snapshot to identify the virus and induces the CRISPR gene to activate the bacterial defence mechanism to fend off the virus. The defence mechanism consists of a protein called Cas9 (short for CRISPR associated protein 9, which associates with the viral spacer to target the virus. This process is illustrated in the figure below. 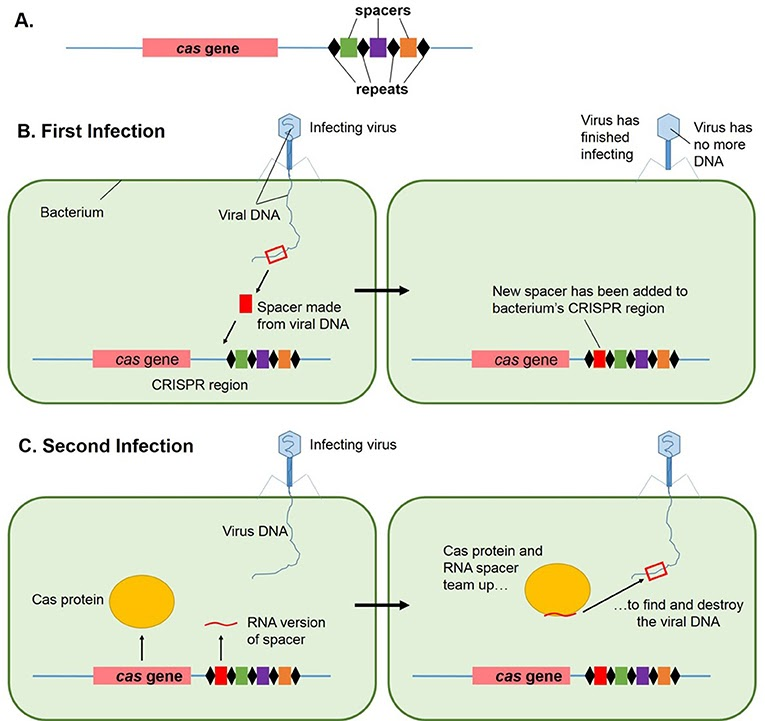 How bacteria use CRISPR/Cas9 to target viruses ( Image Source: Frontiers for Young Minds)

Knowing this mechanism, scientists wondered if and how they could manipulate the CRISPR/Cas9 complex to use in other systems like plants and animals to decrease infection caused by pathogens. They found that in all organisms (plants and animals), CRISPR involves the same rudimentary technique. CRISPR involves breaking apart the gene targets of interest using Cas9 protein and supervising the Guide RNA to bind to the gene targets of interest. Guide RNA is a gene sequence that contains a smaller, more specific sequence complementary to the gene target of interest (called matching genome sequence), and is produced by the host organism endogenously. The binding of Guide RNA to the gene target of interest allows researchers to locate and experimentally delete and/or insert new genes in the bound region. The basic principles of how CRISPR/Cas9 works are illustrated in the diagram below. 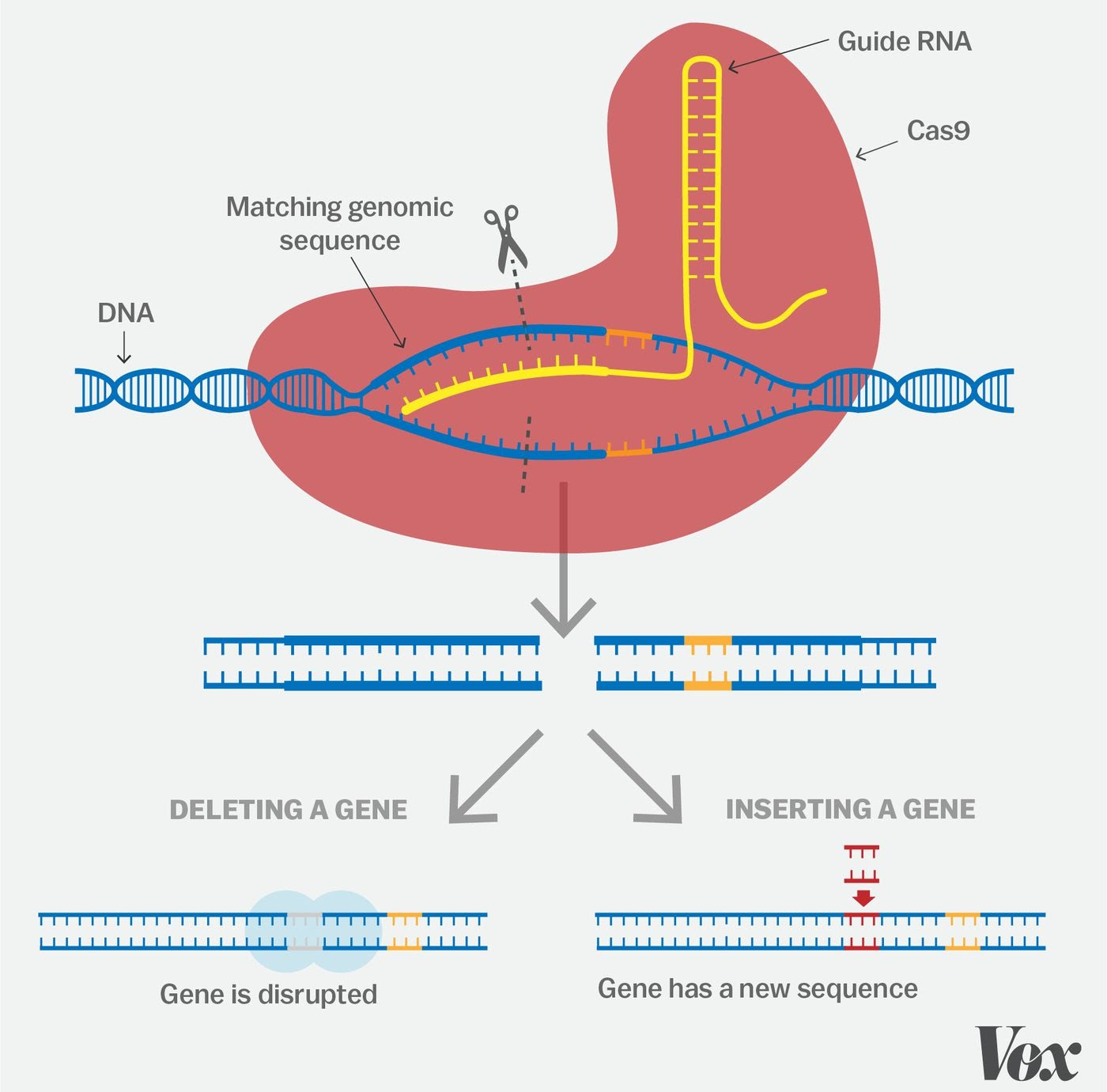 Although gene editing can be performed in several different ways, the use of most gene-editing technologies is limited, expensive, and complex. CRISPR, however, can be used to perform a variety of modifications and is much more affordable, simpler, and faster. These are prime reasons for why the hype around CRISPR has not died down and is still being researched for use in the future.

By using CRISPR for gene editing, food items like fruits and vegetables can be genetically engineered to improve crop yields/nutrition, which provides a possible solution to world hunger. CRISPR has also been researched for many other applications varying from building malaria resistant mosquitoes to directing evolution for plant species.

However, CRISPR’s main interest lies in the potential of editing the human genome, which gives scientists the ability to treat many life-threatening genetic diseases previously thought to be incurable including liver disease, cystic fibrosis, Huntington’s disease, and HIV. 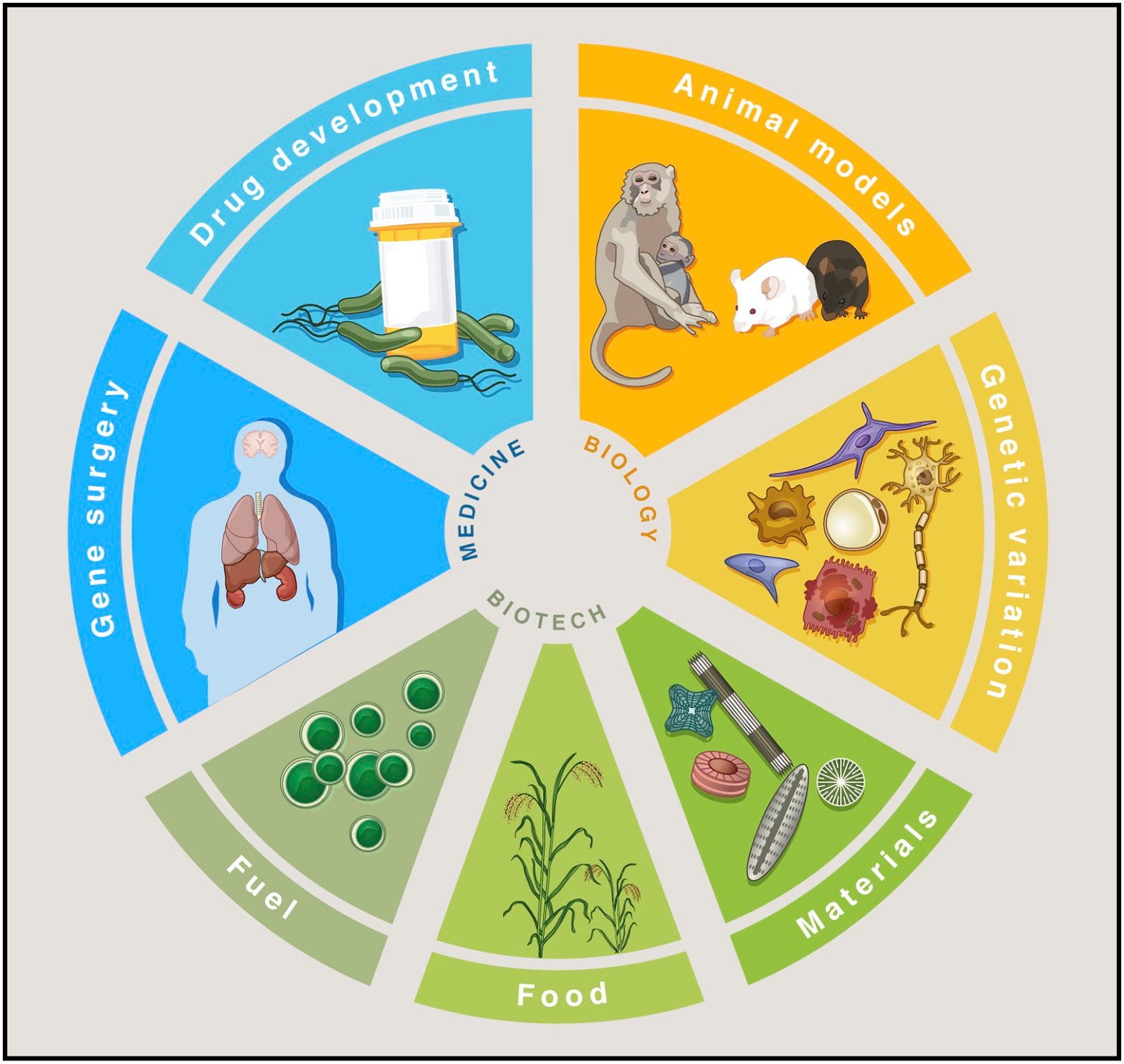 The many uses of CRISPR being researched (Image Source: ScienceDirect)

Human-based research is rarely performed directly in humans, but rather on other animals such as rats and mice that serve as model organisms for humans. In fact, in most countries, editing the human genome is not allowed and is considered a federal offence. China, however, was more relaxed with CRISPR research until 2018. In 2018, Chinese researchers created the world’s first genetically modified humans using CRISPR, two twin girls who had their embryos edited to try to remove a protein involved in HIV. This procedure caused an outrage in the scientific community. Due to the criticism and bad press received by the procedure, the Chinese government suspended all of the research conducted by the principal investigator, He Jiankui indefinitely. In December of 2019, Dr. Jiankui was sentenced to 3 years in jail. 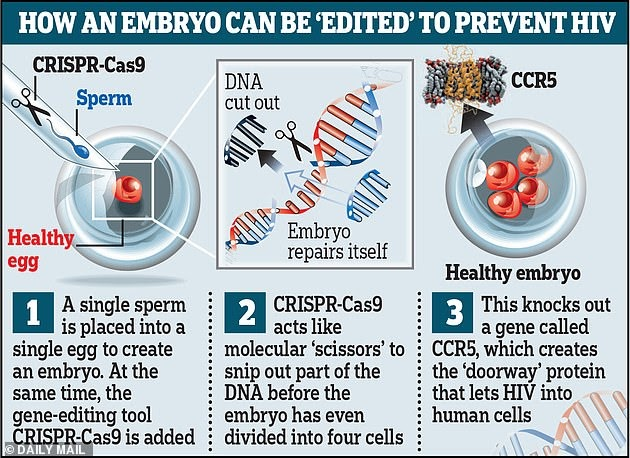 There was definitely concrete justification for the outrage caused by the Chinese researchers. The argument was that there are other possible ways to treat HIV so genetically modifying the genome should have been the last resort, as there is currently not enough research to know how safe or effective CRISPR really even is.

Currently, most countries do not allow gene editing in humans. For example, in Canada, CRISPR editing of the germ cells (which is what was done in China) is considered a crime with a sentence of ten years in prison. The question then is why is such an innovative technology that could provide a breakthrough in medical research looked down upon by so many countries and is heavily regulated through numerous limitations and regulations, even if allowed. This is because there are several biologically dangerous, bioethical, legal, and environmental issues linked to CRISPR.

Just like most gene-editing technologies, CRISPR comes with drawbacks. The genome is the language that serves as a unique identifier for each individual. With CRISPR, when you try to modify this language, sometimes you take out regions that are not supposed to because the genome is so small, leaving mutations in the genome that can be potentially harmful. A 2018 CRISPR study focused on restoring vision in blind mice showed that mutations induced in the mice genome via CRISPR/Cas 9 were potentially deleterious and deemed to be statistically significant confounding factors. This means that unless future research finds ways to mitigate the damage, CRISPR might be limited to non-human based research. 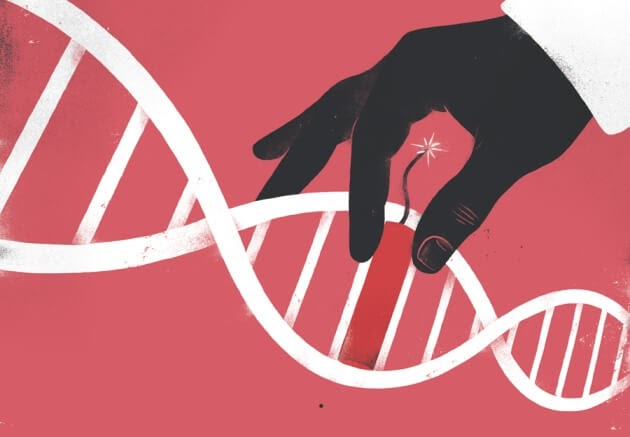 Besides the occurrence of detrimental mutations in the genome, CRISPR also raises bio-ethical concerns. With gene-editing systems like CRISPR, eugenics is a significant dispute in the scientific community. Eugenics is the practice of producing genetically superior individuals (like human resistance to certain diseases) by providing inequity based on who gets access to these resistance treatments. The dispute involves the possibility of CRISPR creating a future where the vulnerable and ‘genetically inferior’ individuals would have decreased access to health care, as well as an unfair survival of the fittest scenario. There are also combined legal and bio-ethical disputes over what organizations and researchers would receive the patent to access and use CRISPR, and how this decision would be made. Lastly, there are also complications involved in how informed consent from participants would be acquired.

CRISPR has also not been totally deemed safe for the environment or nature either. Even though CRISPR can be used to produce ‘superfoods’ or resistant insects, or even eliminate certain insects, all of this has been looked at as small scale research in the lab. For example, creating malaria resistant mosquitoes does not completely eliminate the risk of malaria because it raises the possibility of malaria pathogen just spreading through a different carrier instead. Eliminating insects that are harmful to the human population also can cause a shift in the food chain, as many insects are the main food source of birds. Hence, we still do not know how producing these genetically modified species via CRISPR would even affect the environment and ecosystems on a large scale.

There is no question that CRISPR is definitely something that needs to be retained in the genetic field as the technology could provide immense benefits in the future. However, currently, there is not enough research and data on the technology to implement in large scale use. Over the next few years, CRISPR will continue to be a big part of genetics. If successful, it could provide a big step forward to treating genetic diseases that have previously been deemed incurable diseases.