The decision to take a selective serotonin reuptake inhibitor, or SSRI, is often made with careful consideration. SSRIs are used for several reasons. The most common use is as an antidepressant medication for clinical depression. The first SSRIs were developed during the 1980s and almost 40 years later, patients are still learning about them. Sometimes, even after starting a prescription, patients are unaware of their own options for finding a medicine that helps their condition. Patients who are prescribed SSRIs can feel stigmatized when they are among people who do not understand how the medicine helps. We find reassurance in facts about these medicines and in understanding how they help us.

From studies on these first drugs, the first SSRI fluoxetine was created. This medicine revolutionized antidepressants, as its creation meant that more types of this medicine could later be developed. SSRIs are one of five main types of antidepressants. SSRIs act on the monoamine system by specifically targeting the neuronal receptors that absorb serotonin from the brain’s synapses into the cells of the nervous system. The other four types act on different neurotransmitters to balance the brain’s chemistry.

Serotonin is the body’s “feel good” hormone. It acts as a neurotransmitter contributing to feelings of well being and happiness. Although it is created in sufficient quantities within every body, not every body uses serotonin with equal efficacy. The chemistry of some bodies may cause the oxidation of neurotransmitters, while others may reabsorb neurotransmitters faster than they can be used. We cannot know exactly how our bodies are using serotonin or other neurotransmitters because each body’s metabolism – is unique. Brain cells release serotonin when communicating with each other. When this occurs, serotonin is available to the brain’s synapses to regulate emotions, contributing to feelings of well-being and happiness. The cells then need to reabsorb the serotonin to be used for the next message.

The regulation of serotonin in our bodies is not something that we are able to control intellectually or through will power, but rather, it is a matter of how our metabolisms allow the neurotransmitter to travel through our brains. When SSRIs are used to treat depression, it prevents the brain from recycling serotonin until the synapses that receive it have been filled. An SSRI blocks nerves in the brain from reabsorbing serotonin and keeps the neurotransmitter available for use by the brain’s synapses. The medicine itself is not adding serotonin to the brain, it gives the brain more time to use its available serotonin before being reabsorbed by nerves. In ideal conditions, the brain will regulate the reuptake of serotonin more effectively and the neurotransmitter allows the body to experience well-being. In cases of clinical depression, however, serotonin is reabsorbed too quickly into nerves and is not available for the brain’s synapses. The body is therefore deprived of a neurotransmitter responsible for feelings of well-being and happiness. 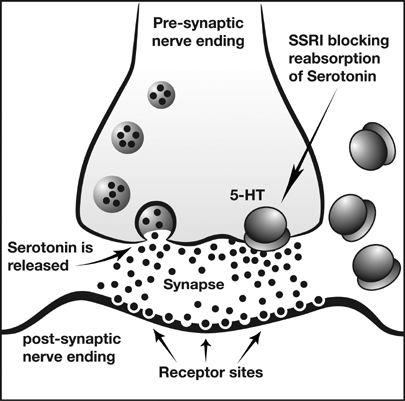 Susan Kirkpatrick, a senior researcher with the Health Experiences Research Group interviewed a series of mental health patients on the topic of taking SSRIs. Many of the people she interviewed expressed concern about being stigmatized for taking mental health medication. They worried about how they would be perceived if they took medication for mental health because they lived among the belief that depression was an intellectual problem, not a bio-chemical one. People believed that mental health problems could be solved using logic alone and that taking SSRIs was a sign of weakness. They believed that they should be in control of their own well-being and able to regulate their emotions without medication. Accepting medication such as an SSRI would therefore be seen as an irresponsible or lazy choice. The patients did not want to be perceived as “failures” for having mental health problems such as depression or anxiety. Certainly, we all have problems with our moods and mental health is on a spectrum, but not all of these problems will require medical intervention. It is important for patients to understand that they are addressing mental health issues instead of needing to change their moods.

SSRIs do not cause an artificial effect of happiness. They do not create feelings of bliss or well-being that are unrealistic. The idea that SSRIs make people feel undue happiness can deter patients from accepting them as treatment for clinical depression. Patients struggle with the belief that using SSRIs means failing to take responsibility for their emotions and well-being. Understanding our brain chemistry and how SSRIs work can make patients feel more comfortable about accepting medication. Through education about anti-depressants and mental health, it is possible to ultimately destigmatize SSRIs.