While theorizing how life began, it has always been assumed that living organisms evolved on Earth, from materials found on Earth.  After all, Earth differs from other planets in the solar system in that it has the perfect conditions to make life possible: the right distance from the sun, an atmosphere to keep the planet warm, the presence of water and carbon — key building blocks for living creatures — and natural processes that cycle elements through the planet.  However, an event in 1969 challenged the notion that life evolved independently on Earth: the crashing of the Murchison meteorite in Australia.

Meteorites are meteoroids (space rocks) that survive a trip into the Earth’s atmosphere and fall to the ground and can range in size from a dust particle to a small asteroid.  The Murchison meteorite — named after the small village in which it landed — provides a snapshot of some of the solar system’s earliest chemistry, dating back to the sun’s formation approximately 4.6 billion years ago.  Millions of organic molecules were found within the meteorite including 86 amino acids, the molecules that serve as building blocks for proteins.  Proteins are an essential component of living organisms, with a wide variety of roles including cell structure, transport and storage, enzymes, antibodies, and messengers such as hormones. 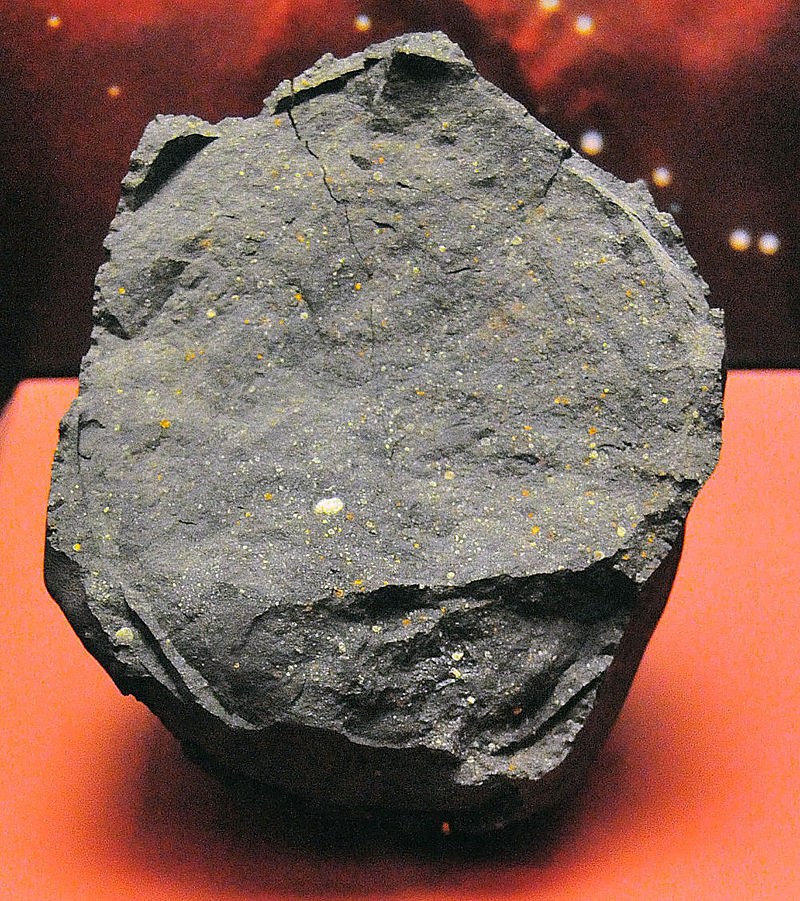 A piece of the Murchison Meteorite. (Image Source: Wikipedia)

Finding organic molecules that are essential to life on a meteorite from outer space prompted the question: could life on Earth have evolved from extraterrestrial molecules?

Theories on How Life Began

The early conditions on Earth were previously believed to be very different from what we know today.  Scientists thought that the planet was very hot and had a much different atmosphere, with no ozone layer or free oxygen, and that frequent volcanic eruptions produced water vapour that is believed to have cooled to form the oceans and resulted in lightning storms.  This led to the popular since disproved “primordial soup” theory: that the conditions on early Earth caused the formation of organic molecules in water, which evolved into the precursors for proteins, DNA, and eventually living organisms.

In the 1920s, scientists John Burdon Sanderson Haldane and Aleksandr Oparin independently theorized what is now known as the Haldane-Oparin theory.  The theory states that organic molecules can be formed from inorganic materials in the presence of an external energy source, such as the high levels of ultraviolet radiation found on early Earth.  They also theorized that early Earth contained warm oceans and a primitive atmosphere with lots of ammonia and water vapour and little oxygen.  This theory is supported by the famous Miller-Urey experiment, conducted by Stanley Miller and Harold Urey in 1953.  In the experiment, they created a closed system simulating the conditions of early Earth: warm water, early Earth’s atmospheric gases (water, ammonia, methane, and hydrogen gas), and sparks of electricity to simulate lightning.  After a week, Miller and Urey found that various types of organic molecules had formed: amino acids, sugars, and lipids. 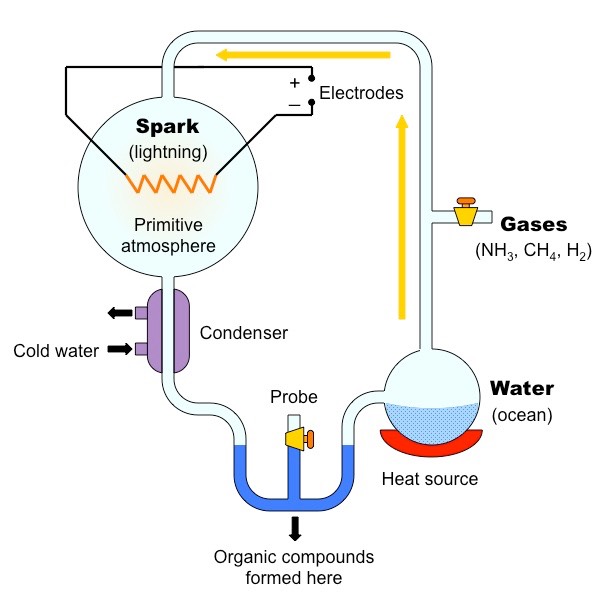 A diagram of the Miller-Urey experiment. (Image Source: BioNinja)

Research conducted since the 1950s suggests that early Earth’s conditions were different than scientists initially thought.  Analysis of Earth’s oldest minerals suggests that the atmosphere was actually full of oxygen-rich compounds such as water, carbon dioxide, and sulphur dioxide.  Despite this, the Miller-Urey experiment is still valuable today, as it was crucial in proving that organic molecules can indeed arise from inorganic matter.

Evidence for Life Originating in Space

The Haldane-Oparin theory and Miller-Urey experiment both assume that life evolved here on Earth, with materials found on the Earth.  More recently, scientists are wondering if that is actually the case.  The Murchison meteorite certainly suggests that organic molecules exist outside of Earth, and it is not the only evidence.

The theory of panspermia, the sharing of life between planets as a result of delivery through meteorites and comets, is gaining more and more traction within the scientific community.  Scientists believe that Mars was likely more habitable than Earth during its early stages, making it possible that some form of life evolved on Mars billions of years ago and was delivered to Earth at some point.  A 2018 study at the University of Hawaii at Manoa found that phosphorus oxoacids, a precursor molecule to DNA, can be synthesized under interstellar conditions, suggesting that they could have been produced in space and carried to Earth via panspermia.

While there is still much research to be done in order to determine whether the building blocks of life originated on Earth or elsewhere, the Murchison meteorite has significant uses for understanding the history of life.  Moreover, it suggests that we may not be alone in the universe — if organic molecules can form out in space, could other carbon-based life forms exist?  It’s a question that is both scary and exciting, and one that we can look forward to answering.