As media production halted at the outset of COVID-19, many awaited the resurrection of Hollywood’s deserted studio lots with restless anticipation. Starved for fresh entertainment upon completing my third Office rewatch, I found myself taking to Google for production updates, scrounging around for scraps of industry intelligence. Like most others, I was mainly keyed in on the prospect of production resumption, with logistical matters barely a blip on my radar. Once scattered news of franchises emerging from pandemic-induced hibernation began trickling in, my excitement was soon shrouded by a looming concern: how might primetime television evolve as the pandemic rages on?

As we move forward into a new year marked by the raging global health crisis, it has become clear that the pandemic isn’t a fleeting disruption, but a lasting reality—one which Hollywood has no choice but to contend with. In addition to disruptions, critically-acclaimed franchises like One Chicago and Grey’s Anatomy are adapting their storylines to feature COVID-related subject matters, signaling the pandemic’s festering encroachment on the entertainment industry. And while a “COVID-themed” season or double-feature may seem harmless enough, its broader implications run deep.

Set in the modern day (and often referencing timely events), franchises like One Chicago pride themselves on upholding a sense of realism while highlighting the heroism of frontline workers. Normally, the environment and general subject matter would be the extent of a show’s alignment with reality; the sheer fact that mystical forces or outlandish plot twists weren’t at play made for a “realistic” program. Although the world changes steadily over the course of production, COVID-19’s unforeseen impact poses a tremendous threat to existing  franchises. As shows continue to task themselves with maintaining authenticity, every forward stride is underpinned by a broader consideration: what is more “realistic”—a pre-COVID world, or the anomalous reality in which we currently live? 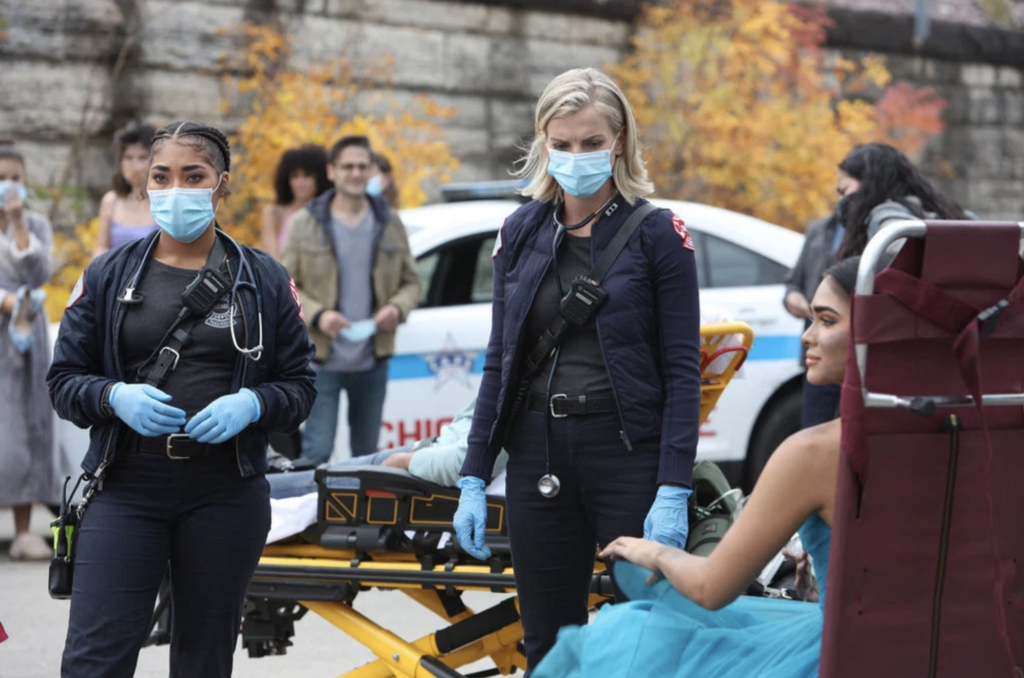 For months, we held tight to the notion of transience; the assurance that “time heals all wounds” was a precarious premise for our strained optimism. As we approach the one-year milestone of lockdown measures and climbing fatalities, many have begun to view our “new normal” as a permanent one. A world without mask-wearing, social distancing, and periods of isolation has grown increasingly foreign, prompting producers to reconsider their own takes on reality. Working the pandemic into plotlines is as bold as it is dicey, paving a path littered with potential pitfalls—and indicating that the pandemic is here to stay. With “realistic” shows adapting to the current state of affairs, we release our fervent grip on life as we once knew it, and acknowledge the persistence of our present reality.

Although dramatic television’s portrayals of COVID-19 are relatively new on the scene, the comedy industry has made cracks about the pandemic since its early stages. Rather than attempting to dramatize our bleak reality, shows like Saturday Night Live (SNL) make light of it, offering a much-needed release from the gloom. While cable television edges warily around trivialization, SNL embraces it, poking fun at governmental failings and public ignorance. Unconstrained by expectations to tastefully portray the consequences of COVID-19, SNL has free rein to address our present reality through lighthearted sketches, mock news segments, and even songs. Its one-off format for each sketch perfectly complements the ever-evolving state of our reality, enabling the program to address COVID-19 in one skit and pop culture in the next. Other comedic programs aren’t as lucky. Sitcoms may struggle with striking a balance between humour and earnestness, as they run the risk of overshadowing comedic bits with heavy subject matters. In spite of it all, production plows on, with comedies like NBC’s Superstore humorously tackling public indifference towards essential workers; despite suffering from inconsistencies in mask-wearing and loose social distancing protocols, the show was able to derive comedy from an otherwise restrictive reality. Moving forward, turning a blind eye to the pandemic seems to be out of the question; so, where might this new COVID-centered entertainment take us? 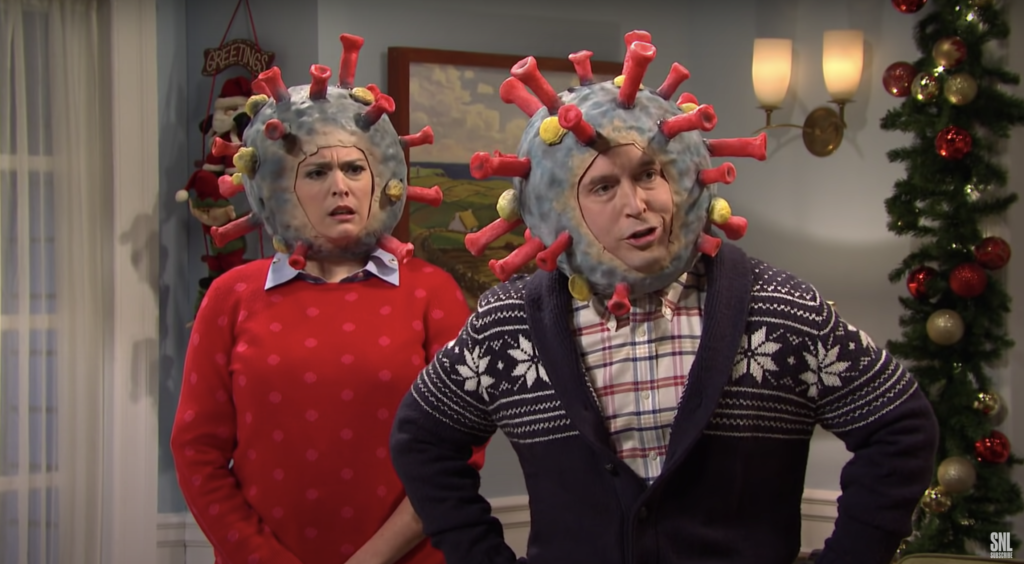 Although many long-running franchises are charting a path towards a “new normal” of television (set in a pandemic-stricken world), various future films and television programs remain suspended in a state of limbo. Armed with tentative estimates of when life will return to some semblance of normalcy, screenwriters risk crafting storylines that may be largely irrelevant by the time of release. While COVID-19 is undoubtedly here to stay, its dominion over our lives may soon ease once vaccines have been widely distributed. In a post-pandemic world, would it be wise to rehash the worst of this last year for the sake of box office revenue? Though centering entire plots around COVID-19 seems extreme at the moment, drawing upon our current state for context and plotlines may present a worthy compromise. After all, life as we once knew it is nearly a year behind us, imposing a mental block on our pre-pandemic perspectives. Would it be jarring to witness social distancing and mask-wearing on the big screen, or would a world without health precautions appear even worse? The former is a double-edged sword, capable of appealing to our present reality while inching dangerously close to romanticization.

Glorified portrayals of illness and tragedy are no strangers to our screens. From heart-wrenching tales of lovers whose afflictions cower in the face of love (The Fault in Our Stars) to one-sided variations of the same premise (Everything, Everything and Five Feet Apart—a name that hits a little too close to home if you ask me), health risks and social isolation were once considered desirable cinematic themes. Of course, when such grave realities began seeping into our everyday lives, I doubt many were still looking upon such concepts as charming. Given COVID-19’s universal impact, a shift away from romanticization may be on the horizon. When fiction becomes reality, the beauty in tragedy erodes, shattering our self-serving delusion.

The first franchises to wrestle with COVID-19 on screen serve as a precursor for what is to follow. Though coming up short in certain areas—with haphazard mask-wearing just one among many pitfalls—the programs ultimately signal that our reality is forever changed. In going forth with pandemic-contextualized depictions, we distance ourselves from what once was, acknowledging that this is not the short-lived change we had presumed. Come what may, Hollywood will undoubtedly retain its time-honored glory—with the dimmed studio lights of today giving way to the triumphs of tomorrow.