Many people may be surprised to know that food insecurity is rampant across Canada, with 8.8% of Canadian households experiencing food insecurity in 2017—2018. Food insecurity does not simply mean a lack of food; however, the Canadian government defines food insecurity as “the inability to acquire or consume an adequate diet quality or sufficient quantity of food in socially acceptable ways, or the uncertainty that one will be able to do so.”  Food insecurity can be categorized into different levels: marginal, where there is worry about running out of food or limiting one’s food selection; moderate, where there is a compromise in the quality and/or quantity of food; and severe, where individuals are missing meals or reducing food intake. At each level, food insecurity encompasses a variety of  issues. This primarily includes  households not having the ability to afford food, especially nutritious meals, and must rely on sources such as food banks and community resources to acquire food.

Shockingly, nearly a tenth of the population cannot easily access quality food in a developed country such as Canada. This article will explore why food insecurity is still such a major issue in Canada, which groups are most affected, and what is being done to combat the problem.

The biggest – and perhaps most obvious – cause of food insecurity is a household’s status as low-income. Workers in low-income jobs are more susceptible to sudden financial hardships such as job losses, reduced work hours or salary reduction, leading to short- or long-term food insecurity. There are a significant number of these individuals that do not have the funds to be food secure, even with government assistance. The rate of food insecurity is four to six times higher in households reliant on government financial assistance such as unemployment insurance. Geographical isolation is another issue that particularly impacts Canada’s northern provinces. The lack of year-round transport to remote areas makes the cost of food astronomically high – one Yukon resident reported paying $7 for three bananas.

Studies have shown that cooking skills and shopping habits are not linked to food insecurity. Food-insecure individuals are four times more likely to budget when grocery shopping than their non-food insecure counterparts. Still, these individuals do not differ with food-secure individuals in other shopping behaviors, such as using a grocery list or planning meals. Additionally, research has shown that gardening is as likely to occur in food-secure households as in food-insecure ones, suggesting that it does not protect families from food insecurity.

There are two types of community food environments that are often cited when discussing the issues that impact food insecurity and public health: food deserts and food swamps. Food deserts refer to geographic areas that have limited access to healthy food. Citizens in these areas often lack the economic resources or transportation necessary to maintain a healthy diet. A food swamp is a geographical area that has adequate access to healthy food retail, but also contains an overabundance of exposure to unhealthy food and beverages. These areas involve an environmental barrier to healthy eating. They present Canadians with the temptations of cheaper, unhealthy food, overshadowing the access to healthier options. Both of these types of areas are important when analyzing food insecurity in Canada and outline the need for ensuring adequate access to healthy and affordable food for all Canadians.

Who Suffers From Food Insecurity?

Statistics from 2017–18 show that 1 in 8 Canadian households faced food insecurity, amounting to 4.4 million people, including more than 1.2 million children. Households with children led by single females are especially vulnerable to food insecurity. Further, 1 in 4 households that rent their accommodations are food insecure and most food-insecure households are in the workforce. For many, simply having one job is not enough to handle necessary expenses, such as rent and food. Social programs for those in the workforce, such as employment insurance and workers’ compensation, do not protect households from food insecurity, as 32% of households reliant on these programs are food insecure. Overall, social assistance rates in Canada are too low to enable households to meet their basic needs. 62% of individuals who rely on social assistance are food insecure. It is clear that individuals who work low-wage jobs require more support and more opportunities to become food secure.

Additionally, food insecurity differs considerably by Indigenous status and racial/cultural group. The highest rates of food insecurity are found among those who identified as Indigenous or Black. This is largely due to systemic disadvantages that these groups have suffered from for decades, simply due to their culture. Several Indigenous communities across the country are still feeling the impacts of certain detrimental practices throughout Canada’s history, such as residential schools. These injustices have been compounded by the ongoing loss of rights to traditional territories and resources, with public opinion, laws and regulations continuing to make engaging in traditional practices difficult, such as Indigenous hunting and fishing. With the loss of traditional food access and practices, many Indigenous families forced to turn to commercial grocery stores are often met with high prices for nutritious food. This is especially harsh in remote areas, such as Nunavut, which is the most food insecure territory in Canada. Without significant economic opportunity, or benefit from traditional natural resources, the cycle of poverty and food insecurity is difficult to overcome for Indigenous communities. 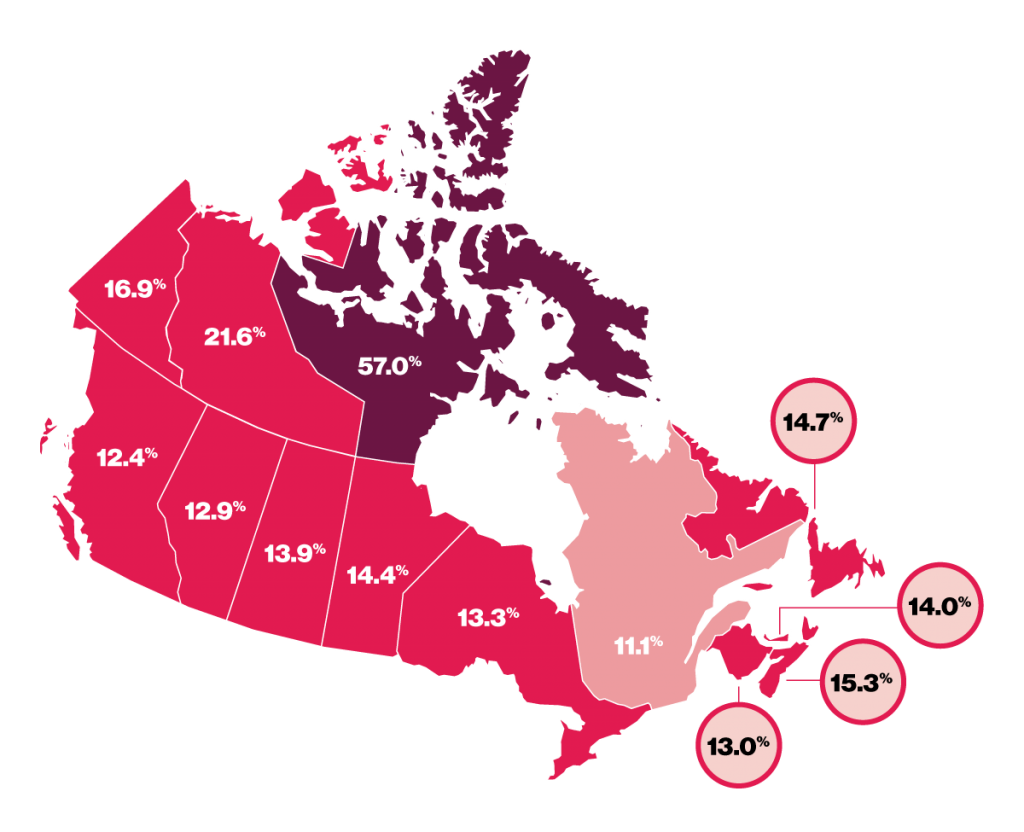 Is Enough Being Done to Combat Food Insecurity?

Although government officials seemingly recognize the severity of food insecurity in Canada, there is no comprehensive policy framework designed to address the issue. Over the past decade, there has been evidence of government policies that have aided people in these situations. Several provinces have implemented tax credits for local producers who donate unsold food to community agencies. The federal government has also increased support for food banks, such as implementing the Local Food Infrastructure Fund, to provide communities with a healthier and more sustainable food system. However, research shows that government interventions have not nearly provided enough assistance and Canada’s response to food insecurity has faced a considerable amount of criticism. This is mainly because such legislation has primarily focused on food charity rather than addressing the root of food insecurity – inadequate income.

For instance, while government investments in food banks have helped many people, statistics show that the majority of food-insecure households do not receive such assistance. Even with increased funding, there are still many communities that do not have access to sufficient food banks. Furthermore, the people who do receive aid from food banks often need more food than what is provided. Although increasing investments for these food charity policies would be a great improvement, it is evident that the government needs to implement income-based solutions to make a difference.

Many Canadian organizations, including Food Secure Canada, Food Banks Canada, and Community Food Centres of Canada are working towards tackling food insecurity at the root of the problem and call for increased government involvement. They have established several programs and networks for those who do not have consistent access to food. For example, Food Secure Canada’s Institutional Food Program strives to increase the supply of fresh, local and sustainable food in institutions across Canada. The organization believes this program will “prompt supply chain shifts towards more sustainable food production and systems.” If successful, this would create a much easier process for communities to access food, as well as improve the nutritional value of such food across Canada. 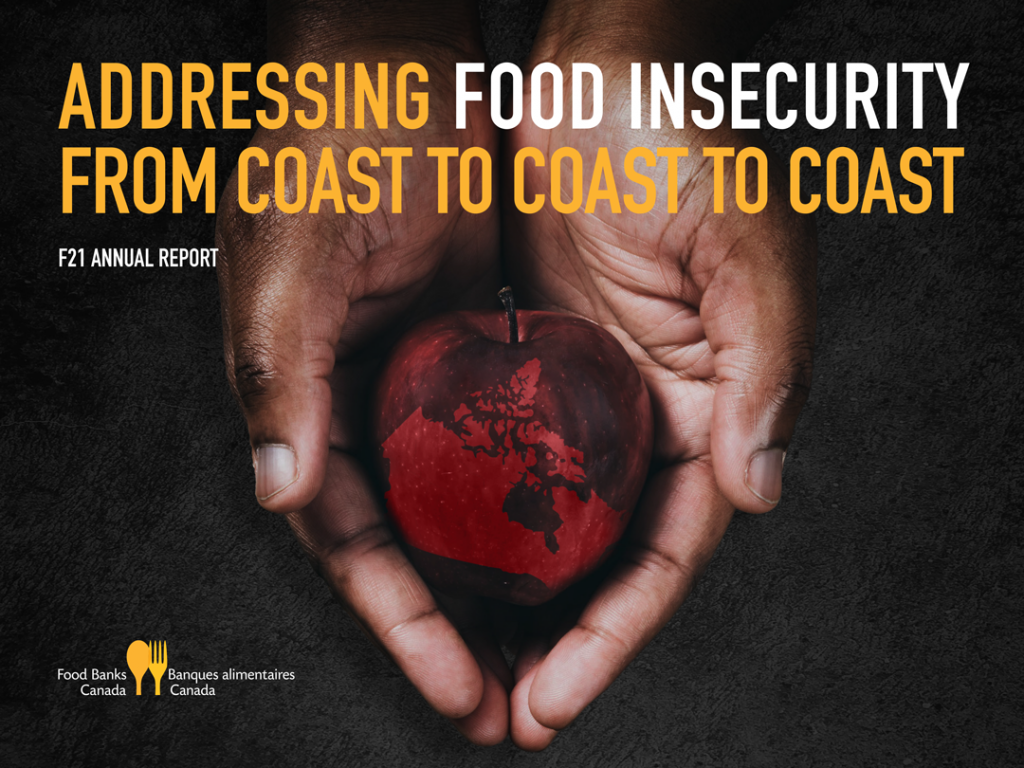 The issue of food insecurity remains prevalent in Canada, especially amidst the COVID-19 pandemic. More can and should be done to deal with this problem. Ordinary Canadian citizens can play a crucial role in helping people in need. By volunteering in various community-led initiatives, especially in Indigenous communities, anyone can help in making food more accessible. Raising awareness can also be very effective. Many individuals are ignorant of how serious of an issue food insecurity continues to be in a developed country like Canada. The more people know how many Canadians are suffering, the more people will be encouraged to help. Further, raising awareness also helps in influencing the government to dedicate more resources towards food security.

This is clearly an issue that needs more attention. There are people all over Canada suffering due to the lack of help they receive. Food insecurity takes a tremendous toll on people’s health and the healthcare system. Not having adequate access to food not only results in physical health problems that could cause serious conditions, but also mental health problems, especially in children. It is unjust that certain groups of people do not have access to basic necessities and it is crucial that Canadians do more to help their fellow citizens. 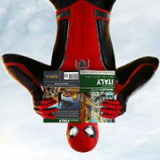