It is no secret that we, as a race have been using and consuming an exponential amount of energy in our time, especially in the last several decades. In 2013, the planet consumed about 18 terawatts of energy. To put that in perspective, the average lightbulb contains 100 watts of energy, and one terawatt could source about 10 billion of these lightbulbs simultaneously. Even worse, Canada is the fifth largest energy consumer in the world, behind countries Iceland, Norway, Bahrain, and Qatar. So where are we going to get this energy from? We’ve deemed that coal-burning and the use of fossil fuels have irredeemable qualities; what’s the other option? 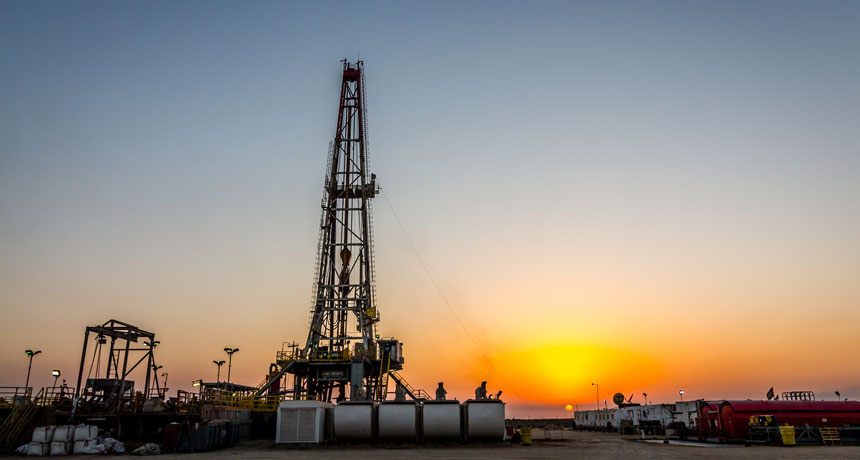 Fracking or hydraulic fracturing is believed to be our saving grace to some, and a terrible nightmare to others. Before arguing the pros and cons, I’m going to explain what “fracking” is.

Below the ground is kilometers and kilometers of sediment. This sediment contains natural gas previously thought unreachable until the process fracking was introduced. Basically, a special type of drill is used to vertically burrow into the ground. The effect is called a well-bore. Once the drill had traveled roughly 3000 meters below, which is the “kick-off point” the drill will make a 90-degree turn in order to continue drilling horizontally for just under 2 kilometers. A special gun is then introduced in order to perforate the rock around the well which has been created. Going through the wells’ casing, the gun is able to create piercings about an inch long. 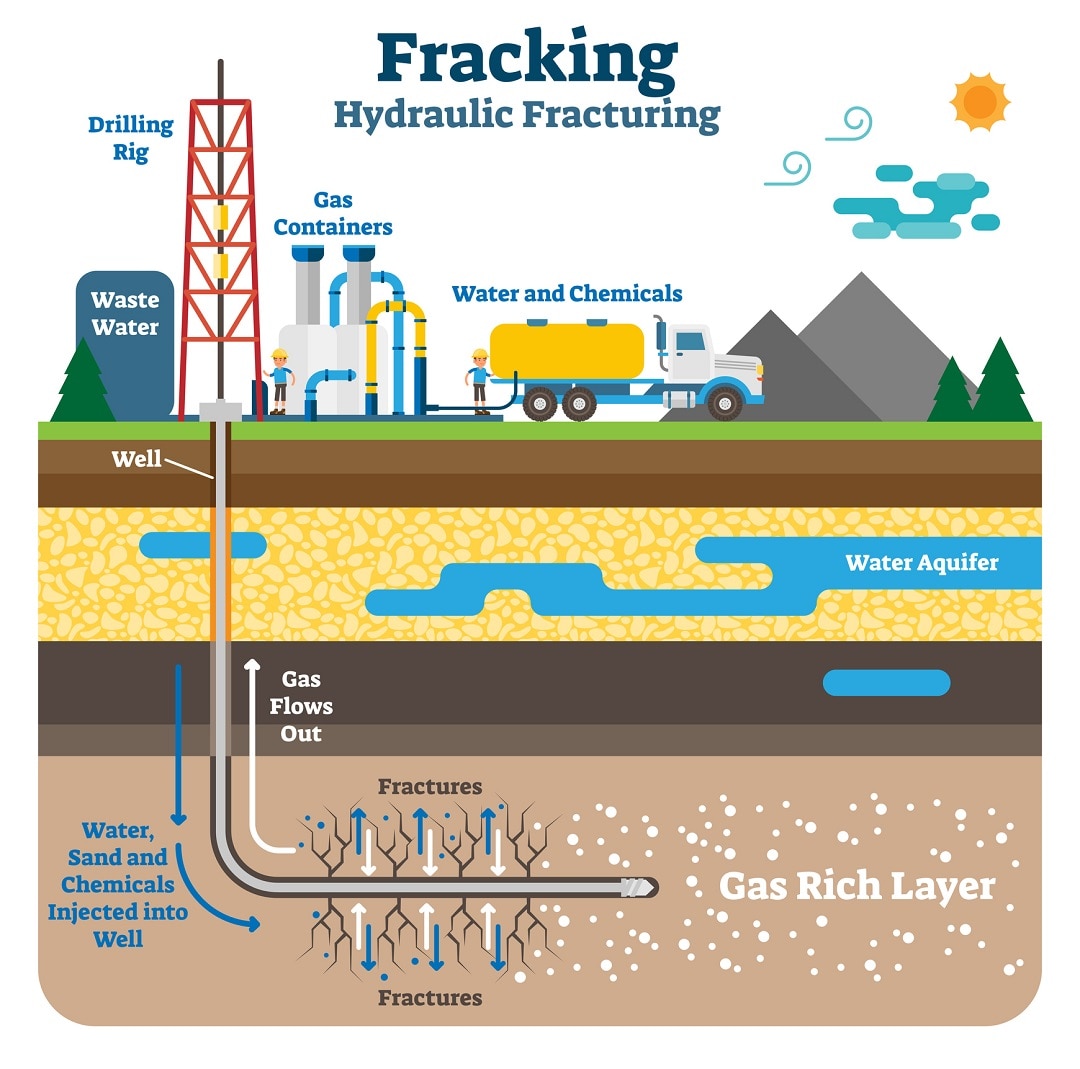 Diagram of the Fracking Process (source)

After a period of time following the perforation, the actual fracking can commence. Millions of gallons of fluid, consisting of water, chemicals, and sand are poured into the cased tunnel. The fluid will then rush through the well at an extremely high pressure, and cause the previously made piercings to grow and fracture further. These cracks give way to the natural gas to enter the well and be carried up to the surface for use.

Now, to further break down this fluid: Fracking fluid or Frac fluid consists of over 90% water, sand/clay and a selection of chemicals. Furthermore, each well can use anywhere from 2-8 billion gallons of water in each singular process. The sand or clay is used to ensure the piercings made stay open, and do not collapse or fill-in. Finally, the chemical element; a highly secretive formula which the public domain has no control of. Basically, the fracking company can select several of 600 chemicals to be used in the formula.

“Typically, 5 to 10 chemicals are used in a single frack job, but a well can be fracked multiple times, and each gas play consists of tens to hundreds of thousands of wells – driving up the number of chemicals ultimately used. Many fracking chemicals are protected from disclosure under trade secret exemptions. Studies of fracking waste have identified formaldehyde, acetic acids, and boric acids, among hundreds of others.”

Some of the most commonly used chemicals consist of sodium chloride, diesel, and most horrifyingly, methane. Though it is argued that there is very little methane being used in relation to the other products and chemicals in the formula, methane is extremely potent. Therefore, even a small amount of methane can produce gruesome effects. Methane is a greenhouse gas, which means it traps heat in the Earth’s atmosphere. Thus, this dangerous chemical traps 86 times the heat CO2 does over 20 years. The fracking companies are therefore putting citizens in danger by putting a chemical that they know is destructive to the environment. Not only does fracking damage the atmosphere, but there is evidence that frac-fluid contaminates the drinking water of the community in which the fracking is occuring. In 2015, the Environmental Protection Agency stated that fracking contanimated drinking water. However, in the 2016 edition, the EPA stated that there is no evidence of contamination. However, Thomas A. Burke, the EPA’s scientific advisor stated that the new statement was “full of gaps and holes,”, and that the new statement expressed evidence of water contamination at all stages. Further, the public has absolutely no control over which chemicals are being put in the frac-fluid, therefore forcing citizens living in communities where fracking is used to be subject to chemicals that are detrimental to their health.

In my opinion, the use of fracking is highly immoral and not worth the energy that is being retrieved. There are plenty of other systems in which natural gases can be brought to the surface for use. For example, green gas.  The process goes of the creation of green gas consists of: a farmer will plant roughly 3000 acres of grass, which will shortly become silage (fermented grass, often used for animal feed). The greens are then transported to a grass mill where it will be turned into green gas. Finally, it will be piped and supplied to homes. This method is much more environmentally friendly than fracking as it is used with all natural products, as well as only emitting 0.5% of methane, while fracking emits 4-8%, according to Ecotricity. While this is more efficient than fracking, the system has its issues. In the UK alone, it would take 10.2 million hectares to heat the country usig green gas, which is equivalent to 92% of UK’s grassland. Because of this, while green gas seems like a better alternative than fracking, there are unrealistic expectations about the delivery of green gas systems. 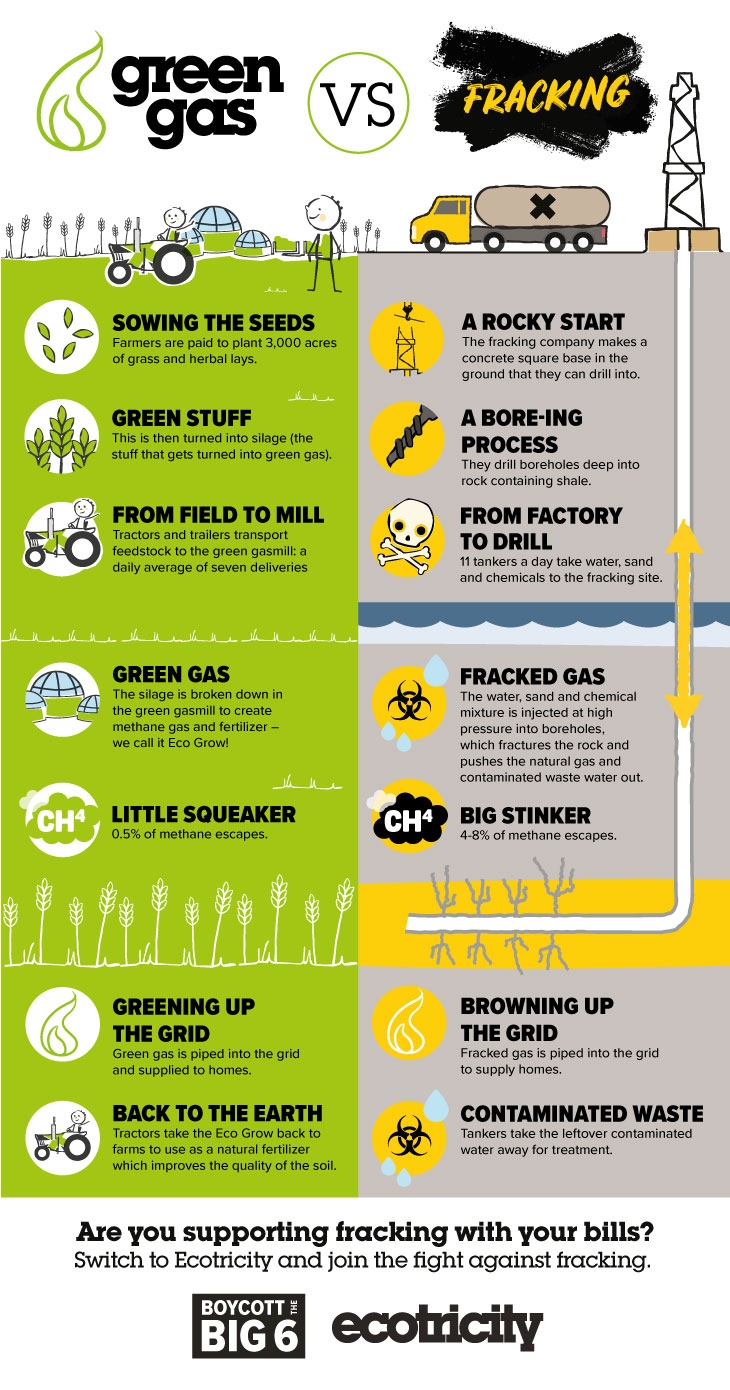 What do you think? Is fracking going to save us by giving us the natural gas we need in order to sustain our lifestyle? Or is it going to prove an even worse fate? While the Green Gas technique is less damaging to the atmosphere, what does it mean for the grassland?