Now, researchers propose that we may be undergoing a fourth agricultural revolution, the focus of which is artificial intelligence (AI). The use of such technologies can have a major impact on the future. Autonomous robots and other AI could aid in many farming techniques such as weeding, crop farming, and even milking livestock— thus replacing human labour. However, research into AI and its use in agriculture is premature and still warrants further exploration prior to implementation for real-world use. Undoubtedly, technology’s impact on the agriculture industry has been noticeable, especially since the green revolution. Specific technological innovations have gained global attraction due to the large impact they could have on the industry. In this article, we highlight some of these crucial technologies and their positive impact.

Genetically modified (GM) crops are a big highlight of the green revolution. These are plants with an altered genome; the genome being a complete set of genetic information that makes up an organism. For example, researchers can introduce a new trait to crops, making them genetically modified. Many industries take advantage of the novel traits, including the pharmaceutical industry, fuel industry, and agricultural industry. For example, canola, grapeseed, corn, peanut, soybean, and sunflower are all currently used in biofuel production. GM crops have impacted the agricultural sector by creating crops resistant to pests, herbicides, diseases, and severe environmental disturbances.

Collectively, these qualities work towards increasing crop productivity, which is why these crops provide an excellent source of support for developing countries where famine and nutritional deficiencies are common. For example, golden rice is a crop with elevated beta-carotene levels, a precursor to vitamin A. This means that the human body can use beta-carotene and convert it into vitamin A. This modified rice has been beneficial to millions of people worldwide where vitamin A deficiencies are common and cause issues such as blindness, diarrhea, compromised immunity, and in extreme cases, death. 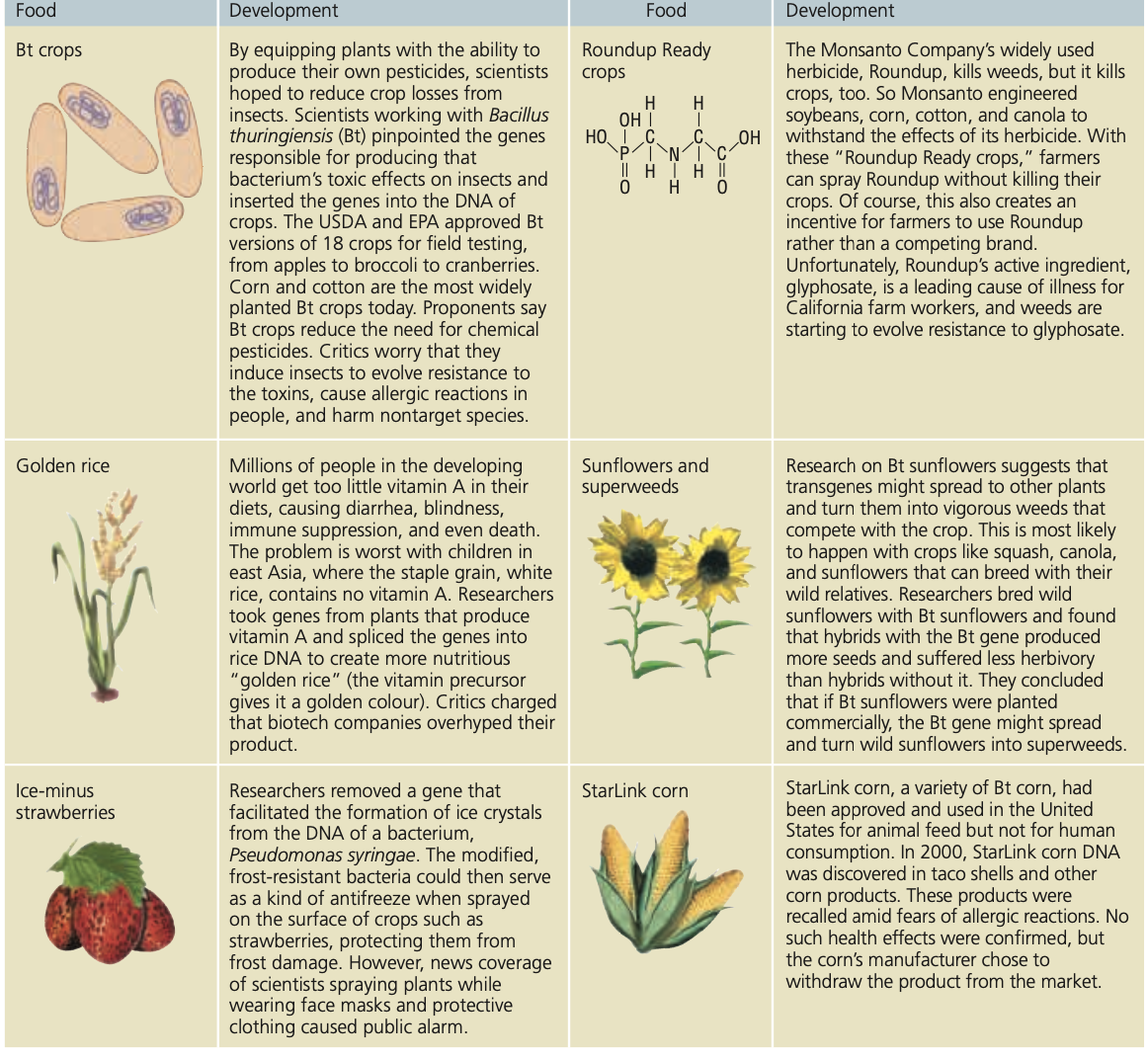 Notable categories of GM Crops and the traits possessed by each. (Image Source: Environment: The Science Behind the Stories, 3rd Canadian Edition)

However, GM crops and other genetically modified organisms (GMOs) are highly controversial. Clearly, the technology holds the potential to help famine and nutritional deficiency crises faced by millions of people worldwide. Then why have people around the world criticized such an asset? While we can write a whole separate article about the controversy surrounding GMOs, the critical areas of dispute include government involvement, concerns about altering natural genomes, and environmental concerns. Regardless of the controversy, GMOs promise solutions to improve global food equity. Research into GMOs is ongoing and will continue for the foreseeable future.

Farmers must make use of irrigation systems in areas that don’t receive regular rainwater or cultivate crops in a way that doesn’t rely entirely on rain. This is a process of artificial water delivery that relies on methods such as groundwater, sprinklers, and canals, and has been a staple farming practice for thousands of years. For example, flood irrigation is one of the oldest systems of delivery that allows water to flow through between crops.

Farmers will have different methods of irrigating crops depending on their budget and preferences. Drip irrigation is a very efficient, albeit expensive, method that pumps water directly to the roots of growing plants using hoses filled with holes. Meanwhile, center pivot irrigation is a cheaper system that is essentially a giant sprinkler with long mechanical arms that deliver water to an entire field. While both systems are immensely useful, there are difficulties with striking a balance between limiting water usage and the amount of crop produced. 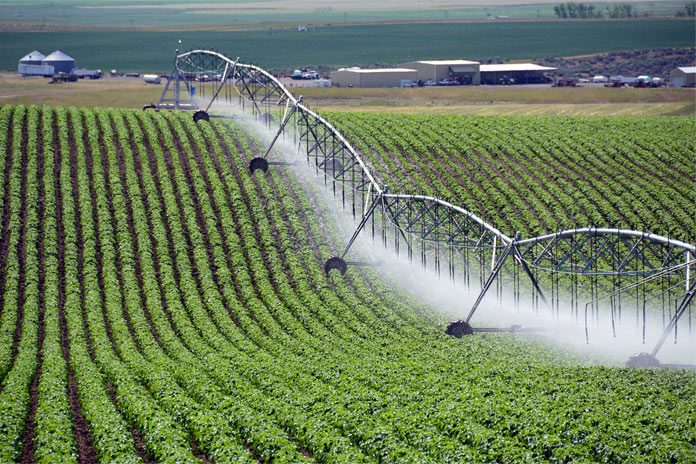 Furthermore, innovation in irrigation has the power to drastically improve the quality of life in developing communities. Sustainable farming projects across Ecuador have installed local irrigation systems for 245 families, while efficient irrigation implementation in India, Burkina Faso, and Zambia have increased crop production up to 110% and farmer income up to 100%. Of course, implementing efficient irrigation also requires proper infrastructure, financial resources, as well as skilled labour.

In an age where almost all aspects of life are partially or fully digitized, farming is no exception. “Smart farming”, or precision agriculture, consists of innovative practices with advanced technology that improves operations. In fact, Emergen Research predicts that the global smart farming market will reach a market size of 25.98 billion US dollars by 2028.

In recent years, smart farming has become increasingly important to meet global consumption demands for the present and future. Using the Internet of Things (IoT), a term that applies to all physical devices connected to the Internet, farmers have implemented systems including sensors and drones to survey land and measure topography, self-regulating greenhouses, and self-driving tractors. IoT also helps monitor the health of livestock. These systems are so widespread that Insider Intelligence predicts that 12 million agricultural sensors will be in place globally by 2023.

Data analytics is another important aspect of smart farming that aids cultivators in making decisions about crops and livestock. Using algorithms to analyze harvest yields, weather patterns, machinery, and consumer trends, farmers are more informed about optimal growth and can have greater control over future crop success.

Telecommunications have also played a large role in smart farming. Some important telecommunication techniques include the Global Positioning System (GPS) and Geographic Information Systems (GIS). Although used interchangeably, there are some crucial differences. GIS tools create and store visual depictions of landscapes by performing spatial (across various land spaces) and temporal (across various time points) analyses. GIS is possible through GPS, a navigation system that tells individuals their location using the satellite systems in space that orbit Earth. In reality, both tools function in highly complex ways and involve heavy calculations made possible through better computing power and software. 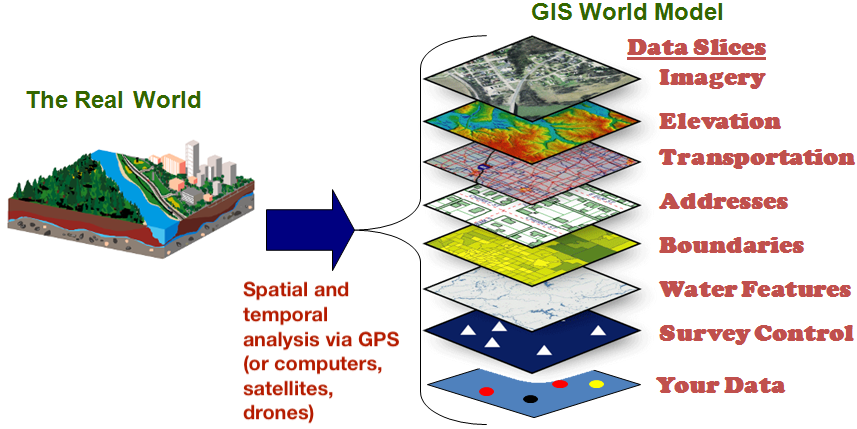 GIS visualization is made possible through GPS technology (Image Source: Modified from In.gov)

By combining real-time data collection and accurate information about the positioning of crops, these technologies enable farmers to perform efficient (and thus ‘precise’) farming. These technologies have allowed farmers to plan crop growth, guide tractors through fields, and work during low visibility conditions such as rainy, dark, hazy, and foggy conditions. Thus, precision farming has permitted farmers to maximize efficiency regarding the use of pesticides, herbicides, and fertilizers, the overuse of which has had a significantly negative impact on the environment and health. The result is increased productivity in the fields, reduced costs for the farms, and minimized environmental damage.

A common misconception about technologies used in precision farming is that it is only possible for wealthy farms where large investments are made. However, this is not true. GPS and GIS are becoming increasingly affordable and are not limited to wealthier farms. A more relevant concern is its limited usefulness in many third-world countries, where there may be a lack of accurate mapping data, management issues or political factors that impede progress. To address these concerns, proposed solutions include the creation of national-level base maps using aerial photos and satellites and forming political partnerships to implement this technology.

The recent surge in farming technology has created what may be considered a fourth wave in agriculture. Farmers can use a variety of methods using information technology, genetically modified crops, and navigation systems to increase crop yield. Most importantly, the adaptation of these technologies in developing communities can allow for better responses to consumer demands and may lead to a more sustainable future for all.