In mental health, we talk a lot about stigma. How stigma leads to misconceptions about what mental illness is, how people living with mental illness act, and how possible recovery is. These misconceptions hurt people’s access to support, which is the very thing that could save their life. This is why I wanted to use my story as a message of how I try to defeat stigma.

Oh, and it involves superheroes.

Growing up with a mental illness, I often felt torn between two people. One was “Public Me” and the other was “Private Me”. Public me was the quirky manic pixie dream girl. The friend, daughter, student, sister and over-user of hashtags and social media who everyone thought I was. “Private Me” was different. Much like the story of Spiderman, I found myself battling my own personal villains. And I had a lot of personal villains: self-hate, anxiety, body Issues, an eating disorder, depression, suicidal ideation, etc. I was always told that these are things you don’t bring out in public to protect the people in your life from your feelings.

Like anyone with dual identities, I could only keep my two lives separate for so long. Eventually, they started to mix and I became someone my family, friends, teachers, and even myself didn’t recognize. It felt like I was losing to my personal villains and began to think there was no place on earth for a superhero that couldn’t save the ones she loved from her villains. So, after many lost battles of trying to keep my mental illness hidden away, I tried to take my own life.

It wasn’t until a few days into my stay at a local hospital that I was helped by the best superhero I could ask for. She was a patient in the ward, an older lady, who had been creepily looking at me for a few hours. She came over to me and said “From one crazy person to another, you will need this”, she then put a necklace in my hand and wandered off. The necklace was a simple sliver chain with one charm on it that said “Hope”. With this simple action, she showed me that people with mental illness are human. That even though she was sick, she connected with me and helped me by giving back exactly what I lost. Hope, that I could be a good person, that I could be an important part of society.

That sort of thinking opened  my mind. I realized that asking people with mental health issues to hide their struggles, was like asking Superheroes to fight off the worst bad guys with no weapons or super powers. That support, love, and treatment are our weapons and superpowers. She showed me that everyone living with mental illness are incredibly strong. Strength is never something we should hide. It is something we should celebrate. I was angered by the fact that stigma was making people hide their strength, knowing if it was cancer, that the world would be celebrating our will to survive.

From there, I stopped being ashamed of living with a mental illness. I try everyday to be like Iron Man. If that doesn’t make any sense, let me paint a picture for you. At the end of the first iron man movie, Tony Stark is asked to deny that he is Iron Man and even has an alibi written up for him to present at a press conference. He approaches the podium to a wave of reporter questions, sits down and says “Yes , I am Iron Man” and walks off. This simple movie has inspired me to be confident with my journey and whatever new mental health struggles come my way. Even though we might not always make the right decisions or have the easiest journeys, our stories are so incredibly valid. After all, you are still a badass superhero even if the only person you save is yourself.

Now that I speak openly about my journey, conference organizers often ask me to talk about my mental health in the past tense. That is to highlight the positive parts of being a mental health superhero like having a TEDxTalk and being featured on MTV. The truth is that mental illness still affects my life, which means I have amazing days and terrible days. Yes, some days are TV appearances, kicking butt at work and laughing with my friends. Other days , I binge eat all my feelings and think about suicide. I share these experiences to show people that you can be both: an advocate while struggling, successful and depressed, imperfect and inspiring and a role model while still trying. While reading this, I hope you’ve realized that you don’t need to be completely recovered to have a voice for change and a valid story. More importantly, wherever you are now, you are awesome!

This article was originally posted in Huffington Post and has been revised for INKspire. 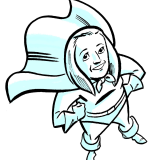