If you’re ever feeling lonely, here’s a not-so-cuddly reminder that trillions of microorganisms are actively living and thriving on and inside of you. One such species is Demodex folliculorum, also known as pesky mites, which burrow in and around our hair follicles. And according to new research, they may soon become permanent additions to the human body.

Mites are small arthropods closely related to spiders and ticks. They do not typically cause disease and most people don’t even know that they carry them on their bodies. Certain species of mites feed primarily on sebum, which are oils produced naturally by oil glands underneath our skin, and our bodies are where they also mate, reproduce and eventually die. They’re about 0.2 mm in length and only capable of moving slowly from hair follicle to hair follicle, primarily at night.

These little mites living on us have a comfortable two-week lifespan, with no predators and very little competition. They don’t really need any type of defence; their only necessity is to develop their simple legs and bodies. Their mobility consists of just three single-celled muscles and their bodies require just enough proteins to metabolize their food.

According to new research published in Molecular Biology and Evolution, this comfortable life has transformed D. folliculorum’s DNA. Since they don’t encounter other mites, very few new genes are introduced into their gene pool. Likewise, since they only come out at night, they’ve lost the need for UV-protection genes. They don’t need to concern themselves with transmission between people; humans readily transmit them to others, whether it’s through a simple touch or through a breastfeeding mother. They have also become incredibly inbred, in part due to their slow movement, which has shrunk their genome even further. They don’t even need to produce the sleeping hormone melatonin to regulate their circadian rhythm because they can use the melatonin released naturally by the human skin. With all their needs provided, the mites have lost many of their genes and have only kept the bare minimum. 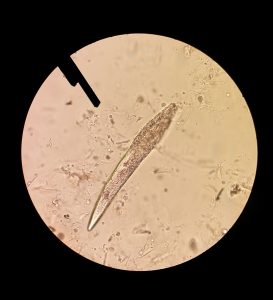 In addition, scientists have previously theorized that mites were parasitic and could exacerbate skin inflammation; however, the study found that D. folliculorum actually cleans our pores and benefits us. Other species of mites could trigger a human’s immune system and cause inflammation against the mites, which may explain why they were previously thought to be parasitic.

Normally, such a small genome for a vulnerable species would spell doom and the organism would likely head towards extinction. But these mites actually benefit humans, and vice versa. Now, scientists theorize that mites are evolving towards becoming “endosymbionts.” This means that they will only be able to live on humans; they simply could not live anywhere else aside from the burrows of the human hair follicle because they would have lost all their defences. The mites also spend almost all their lives within the hair follicles; as such, they are quite literally merging with humans. It’s not as horrific as it sounds — you won’t even feel it.

This is an incredibly unprecedented finding; we know of symbiotic bacteria living within humans, but this would be the first non-bacterial organism to permanently live within us – specifically, the first known case of a complex organism evolving to merge with human beings.

This opens the door for the possibilities of evolution, particularly for humans. The fact that organisms are capable of endosymbiosis has many implications for adaptation and survival — and it’s the reason for life as we know it today. One of the earliest cases of endosymbiosis likely happened about 1.45 billion years ago, when a predatory bacterial cell swallowed another smaller bacterial cell and the smaller bacterial cell survived its own ingestion, providing the predatory bacterium with the ability to use oxygen to produce energy. Oxygen is a powerful tool and it produces significantly more energy, allowing that bigger cell to survive and adapt substantially better to harsh conditions. You may have heard the name of the organelles that developed from this small simple cell thriving within the large cell in your biology class — today, we call them mitochondria. Plant cells have a similar evolutionary lineage, except their ancestral cells have another microbial component, called the chloroplast. 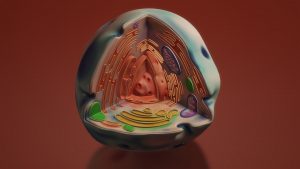 The modern-day cell has evolved complex organelles including mitochondria thanks to the process of endosymbiosis. (Image Source: Pixabay)

Once cells were able to use oxygen and sunlight to produce more energy, they were capable of many more complex energy-producing reactions. They could band together and work in unison, they could create new tissues with novel digestive or respiratory functions and, eventually, they began evolving into multicellular organisms, including humans. Almost every single cell in our body contains at least one little mitochondrion, which allows us to use oxygen for energy. Life as we know it could have never evolved had it not been for endosymbiosis.

Now, as we see a non-bacterial organism becoming our own endosymbiont, who knows where it could take us? It seems trivial now, as it is only a simple mite in our skin. But as scientists point out, endosymbionts provide us with new genes and molecular mechanisms that could help us in the most unexpected ways. If mites can merge with us, who knows which other beneficial organisms could? Thousands of years from now, our common ancestry could open a new branch of human evolution. 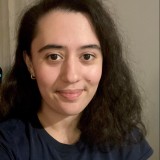