As Canadians, we are living through an unmistakably interesting and tumultuous time in terms of our politics. For the first time in history, our current Prime Minister, Justin Trudeau, is the son of the former Prime Minister, Pierre Elliott Trudeau. As Trudeau Sr. is one of the most controversial Prime Ministers due to his sharp tongue, this dynasty is interesting yet frightening to many of Trudeau’s critics.

Throughout this article, I will be taking you through two separate crises that have ensued during the Trudeau family’s governance. Both crises share similar factors, such as the triggering of western states and lack of trust throughout, and I will analyze their reactions.  The idiom “like father like son” will be tested as we take a deep-dive into decisions made by Trudeau Senior and Trudeau Junior. 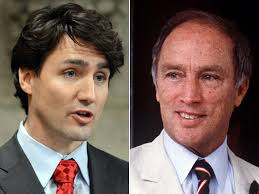 Justin on the left, Pierre on the right (source: National Post)

Pierre Trudeau found himself in the midst of a large dispute between Eastern Canada and Alberta due to one of the largest tamperings of the Federal government into the economy since World War II. At the beginning of his re-election in 1980, Trudeau decided to introduce the National Energy Program, which was curated in hopes of securing the Albertan oil during a time of turmoil in terms of the oil industry globally. Amid international fear of oil prices skyrocketing due to strife in the middle east, Trudeau devised the NEP was to reduce Canadian dependence on foreign oil, export more Canadian oil abroad, and shift a large portion of the ownership of the oil from Alberta to the federal government.

To do this, the government issued grants to companies willing to drill in remote northern areas, therefore away from metropolitan cities and large masses of people, and to citizens willing to switch their kitchen fuel from oil to gas heating. They also established a 25 percent federal ownership share on all oil discoveries found in the North. This, along with the new federal royalties placed in order to subsidize Petro-Canada, upset many Eastern Canadian citizens. (Formal Liberal strategist wrote the unofficial slogan of Trudeau’s government was “Screw the West, we’ll take the rest!”) 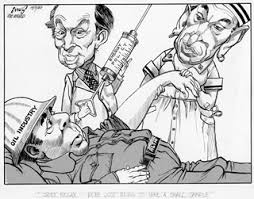 Propaganda against the Federal Government (source: Alberta On Record)

The Albertan community responded with outrage, accusing the government of stealing their money from them. “Polls showed Albertans opposed the NEP by a ratio of 5-1. On one radio call-in show, an angry caller even vowed to take-up arms against the federal government.“

In 1981, both the Ontario and Alberta governments agreed to change the provisions of the sharing of the revenue, which somewhat ameliorated the situation. From then until Conservative Brian Mulroney’s election in ’84, the NEP slowly vanished until it was completely defunct. Even though the program only lasted 4 years, it severed ties with Eastern Canada for years to come. 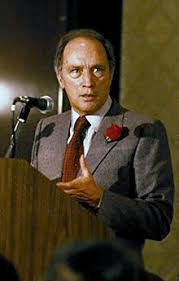 Will Justin Trudeau err in his father’s footsteps?

Canada’s current Prime Minister, Justin Trudeau, suffered major backlash from the public and the First Nations after he announced his plans to twin the Trans-Mountain pipelines between Alberta and British Columbia. On numerous occasions, he justified its importance by stating its construction is “a matter of national importance,”, However, many begged to differ:  this project has caused severe segregation between Eastern and Western Canada (much like the NEP). Nonetheless, Trudeau’s adamance on the project’s success drove him to spend 4.5 billion Canadian dollars. 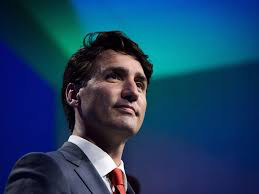 Trudeau’s decision places Canada in a precarious position. That the government, rather than a privately-owned company bought the pipeline is off-putting to many countries. These countries may now view Canada as a nation unable to inspire their own companies and citizens, with a lack of leadership throughout the country. “A prime minister who styled himself as a progressive environmental champion will now be known as the leader who purchased a pipeline to ensure it was built,” says Tim Harper, national affairs columnist for the Toronto Star.

With the federal election coming up in November 2019, it will only be a matter of time to see if the pipeline actually begins construction, or if Trudeau’s dream crumbles before his eyes. 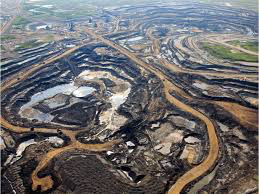 In my opinion, there is no perfect leader. Every Prime Minister has their fair share of mistakes and accomplishments. Though I may disagree with Pierre Trudeau’s performance during the 1980s, I still hold him in high regard due to his actions during the October crisis (when he shut down the radical FLQ group after several kidnappings of government officials by stripping the rights of citizens in order to make arrests on a whim). As for the pipeline, I am undecided as to whether exporting Canadian oil is worth the steep cost in budget as well as the consequences it delivers to relevant communities. For the sake of Justin Trudeau’s standing in this upcoming election, I hope he decides to begin taking action responsible instead of bestowing false promises upon the Canadian people. 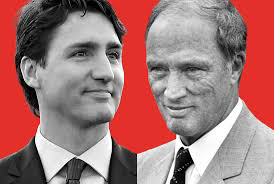