Before anything else, I’m hungry. So let’s start with food. Food is a universal thing.

It may just be sustenance to some, but for a lot of us, certain foods carry memories attached to them. Sure, food is part of a culture, like a Spanish Roscón de Reyes or a Jewish Latke, but memories, for many, make food part of their identity―think about those information sheets you filled out in elementary school, and the questions you had to answer: What is your favorite food? they’d ask. Just as important as your favorite color, your age, your grade. 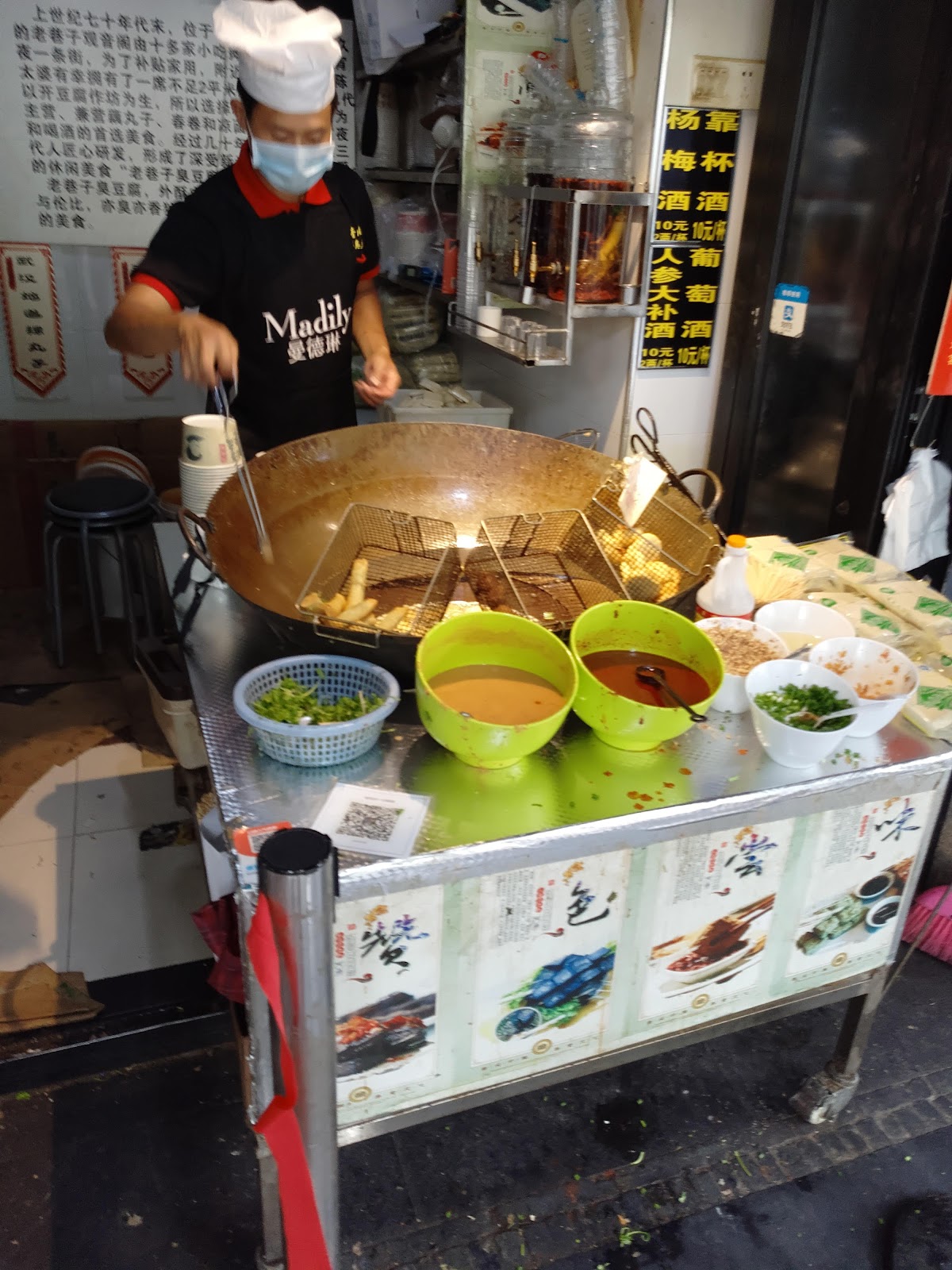 For the city of Wuhan, food is most certainly a part of a citizen’s identity―so important, in fact, that there is a specific phrase coined in the city dialect to describe the tradition of breakfast: 过早 (guo zao).

Here in America, there’s a huge emphasis on making “Sunday morning breakfast”, but whenever I go back to Wuhan, at least once, I wake up early in the morning and head downstairs to buy breakfast. Beneath every apartment complex, there’s always a group of vendors clustered together, hawking their steaming wares to passersby as enticing smells waft out of enormous pots and bowls, with their lids shut to keep them warm. 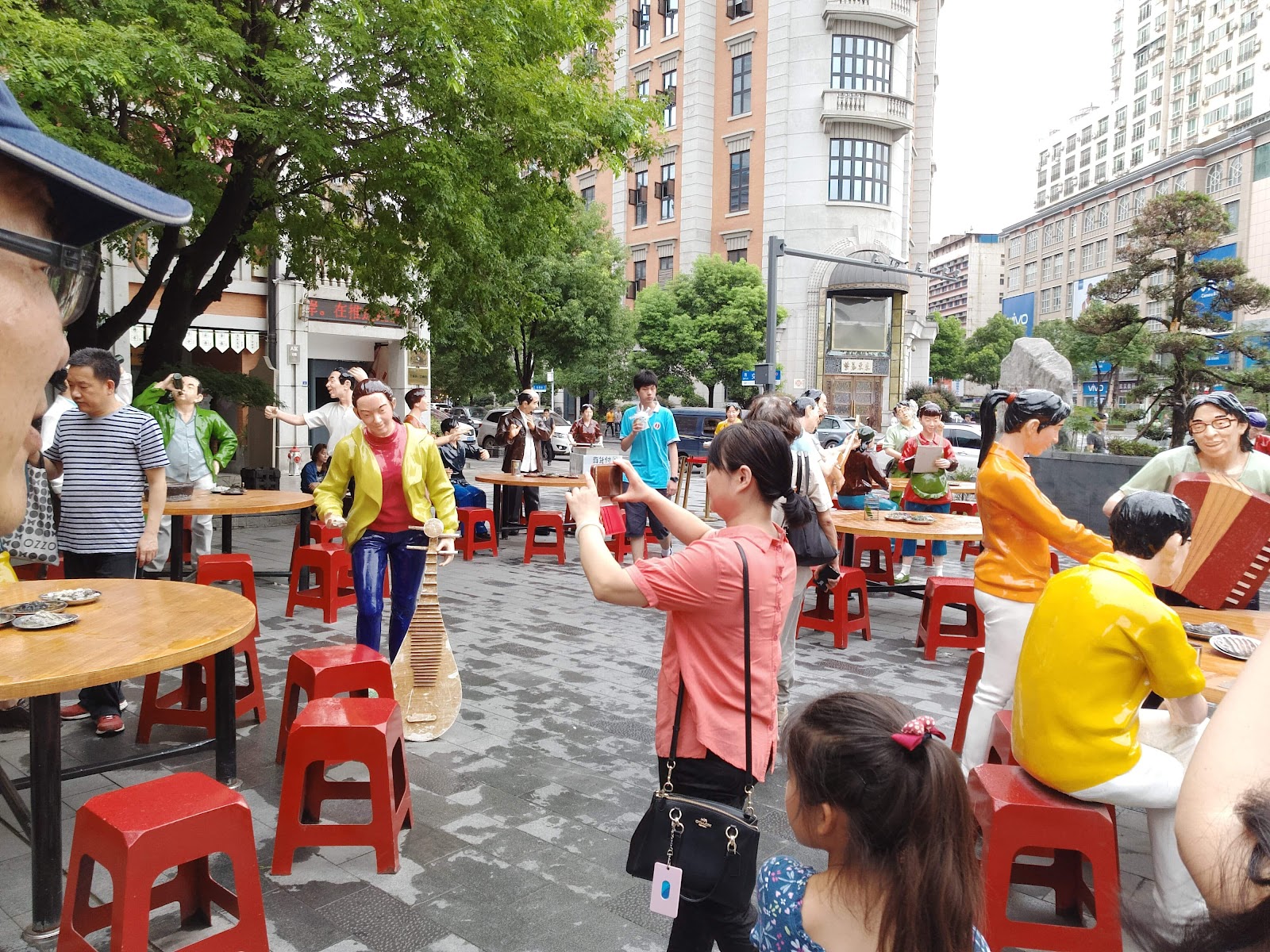 The (aforementioned) Jiqing Street, popular in Wuhan for its diverse array of street foods. (Yes, most of those are statues, not people.)

One student talks about sesame noodles (热干面, re gan mian, literally meaning “hot dry noodles”), sold by many different vendors that each have their own flavor. A bean curd filled with rice (豆皮, dou pi) is another favorite. There’s lotus root soup (藕汤, ou tang), a Wuhan dinner specialty, Lu Benwei (卢本伟) mentions. Personally, I love 糊汤米酒 (hu tang mi jiu), a thick sweet soup made with little osmanthus flowers, fermented rice, and sticky rice balls. Not only does it satisfy my sweet tooth, but also it has a double meaning for the people of Wuhan, because, in the local dialect, the phrase itself means “stupid”. (As my dad remarks, it’s clearly perfect for me.)

Sometimes, after buying something, a buyer stops to chat with a vendor if the business isn’t at its maximum at that moment; even if it’s someone they’ve just met, there is always something to talk about in Wuhan. (In my opinion, food is always a good choice.)

It’s no surprise that for many, buying breakfast is just a routine thing. Routine enough, in fact, that people make their entire livelihoods off of it. For many of these vendors, this is their life; this is how they make enough money to survive to the next day. But the lockdown has changed everything.

In late January, the government announced a shutdown of the city, locking its residents in and blocking everything else out, just before China’s most important holiday, the Lunar New Year. The global response has been a mixed one. “They did badly, for they didn’t prepare anything before they made the decision,” sophomore student, Zhang Bohao, says. Some argue that this lack of organization has led to even more deaths than should have happened, as the lockdown has caused people to flood the hospital. Just as the squeaky wheel gets the oil first, it’s no secret that the Chinese medical system has issues with corruption and bribery―those who pay, even if they aren’t sick, get treated, and not only do they put themselves at risk by being in the hospital (a hotbed of infection), but leave those who are sick to remain with other people, endangering everyone. But inside the city, most agree with a decision that to them, shouldn’t be controversial at all.

“The lockdown is necessary; if you’re not in Wuhan, you don’t understand how bad this epidemic is,” another student argues. “We all support this decision because it’s prevented other cities/locations from breakouts as bad as ours.”

Even if some don’t enjoy the situation they’re in, most recognize it as the best possible alternative, and that its advantages outweigh its disadvantages. One of the most important (arguably, the most important) tenets of Chinese New Year is to return to one’s family to celebrate. As a Confucianism tradition, sure, but also as a matter of respect. Many Wuhanese weren’t able to do so this year―but many others, after returning, couldn’t leave.

Normally, during the New Year season, train services run at elevated rates to accommodate for the elevated amount of people traveling―but if so many people were to return home or come back, not only would that pose a massive danger to people entering, but all those people leaving would be liabilities that the government wouldn’t be able to account for once they left the city. Is that a risk that they’re willing to take? No. So, a student argues, the shutdown was worth it to contain that spread. Most of the dissenters agree with her as well. The lockdown may be a little extreme, one student explains, but agrees with another student, Jinling, in concluding that “[b]locking the city is certainly a bad option, but it is one of the most effective”.

For the rest of China, the lockdown has been hailed as a valiant sacrifice for the safety of others. On the annual CCTV New Year Gala broadcasted nationwide, announcers saluted the bravery of the people; whether it was intended to appear ironic or propagandized, that’s up to the people to decide for themselves. But as long as the people can bear it, the shutdown continues, and the city remains silent.

Read the next letter, Part III: Dear Transportation and Education, in this series now!