Toronto’s public transit system, known as the Toronto Transit Commission (TTC), is the lifeblood of the city. On an average business day, it sees nearly 1.7 million riders on its buses, streetcars, and subway.  Despite it being a key part of their daily commute, many of these riders may not be aware of a secret hidden in the heart of the subway system: the abandoned lower level of Bay Station, known as Lower Bay.

Abandoned subway stations are common in large cities.  There are 49 in London, England, and dozens in New York City.  According to a spokesperson for NYC Transit, subway stations are typically closed because of their proximity to other stations, not due to low ridership.  These stations can be completely abandoned – as in, no people or trains are meant to enter – but some are used as storage facilities, operate at a limited capacity, or have trains pass through them without stopping.  This final scenario is the case for the impressive City Hall Station in New York City. 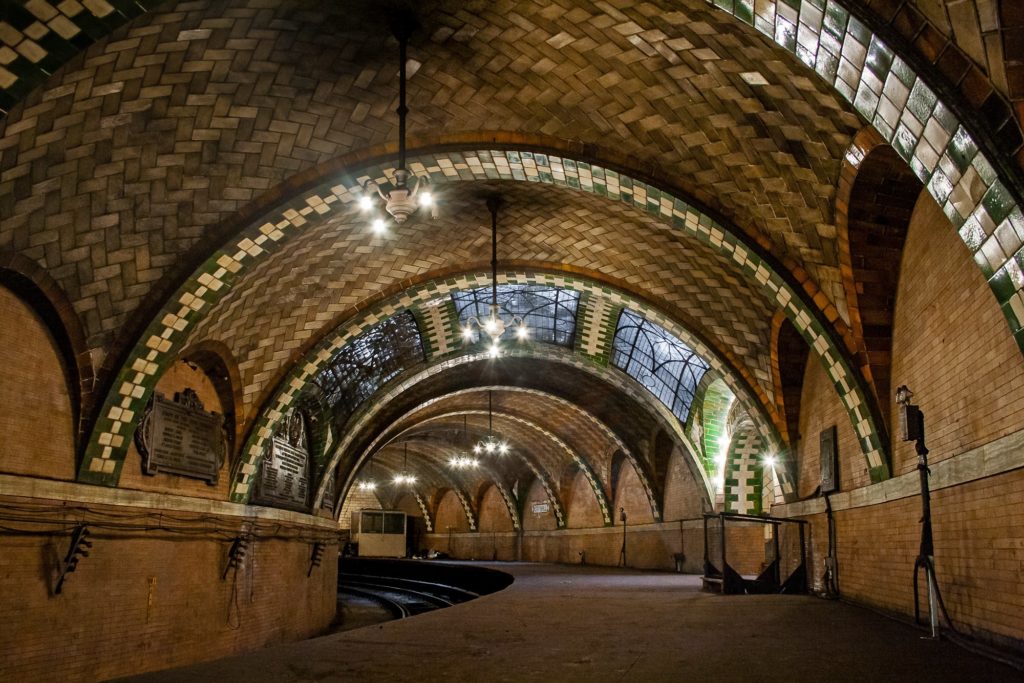 City Hall Station was one of New York’s first subway stations when the system opened in 1904. (Image Source: 6sqft)

The story of Lower Bay is an unusual one.  Foreseeing that the two transfer stations between the Yonge-University and Bloor-Danforth lines — St. George and Bloor-Yonge — would quickly face overcrowding problems, transportation engineer Norman D. Wilson proposed using integrated operation to allow passengers to travel between the Yonge-University and Bloor-Danforth lines while staying on the same train.

The historic map of the Toronto subway below demonstrates the proposed route.  Note that in the model used today with no integrated subway lines, the U-shaped line from Eglinton to Museum is the Yonge-University line, which is not specified on this map.  As transfer stations, St. George and Bay have two levels corresponding to different subway lines, which will be referred to as the Upper and Lower levels. 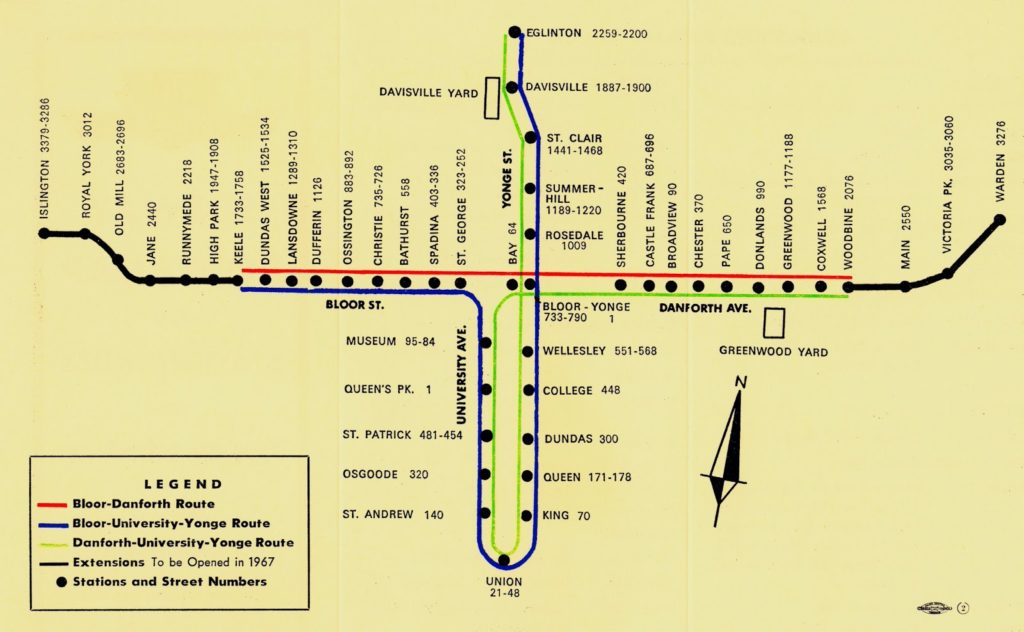 A map of the Toronto subway system in 1966, showing the routes that trains would take to switch lines. (Image Source: Station Fixation)

A train on the Yonge-University line would follow the blue route, traveling south from the northern terminus of the line (Eglinton Station at the time) to Museum, at which point the train would switch lines at Upper St. George Station and travel west on the Bloor-Danforth line to the western terminus, Keele Station.  The train would then switch directions and follow the red route, spanning the entirety of the Bloor-Danforth line via Lower St. George and Upper Bay. After arriving at the eastern terminus, Woodbine Station, passing through Upper Bay Station on the way, the train would switch directions again and follow the green route.  It would travel west on the Bloor-Danforth line, switching back to Museum Station on the Yonge-University line via Lower Bay.  The route would be reversed every other train – so the next train would complete the green route first (Eglinton to Woodbine), then the red (Woodbine to Keele), then the blue (Keele to Eglinton).

When Bay Station was built in 1966, this idea was implemented as a pilot project which would theoretically allow riders to travel between the suburbs and downtown without switching trains.  The pilot project was discontinued after only six months, primarily because it created confusion for some riders.  Additionally, some eastbound and westbound riders took advantage of the system and created a safety hazard.  Someone wanting to travel east from Bay Station could take either the green or red route, so a train travelling in their desired direction could arrive at either Upper or Lower Bay.  A similar situation arose for passengers travelling west at St. George, who could take either the blue or red routes from trains on both levels of the stations.  This resulted in passengers at Bay and St. George waiting mid-stairwell for the first train travelling in their desired direction, and sprinting to get there in time.

A survey of over 400,000 passengers showed that 15.7% reported finding the new system convenient, with 16.0% finding it inconvenient, and the remaining 68.3% being unaffected.  These results, along with the fact that combining lines meant that a single broken-down or delayed train could stop or slow the entire subway system, caused the TTC to shelf the project.  The stairwells connecting both levels of Bay station were bricked up and the station became a single-level stop, with Lower Bay becoming disused. 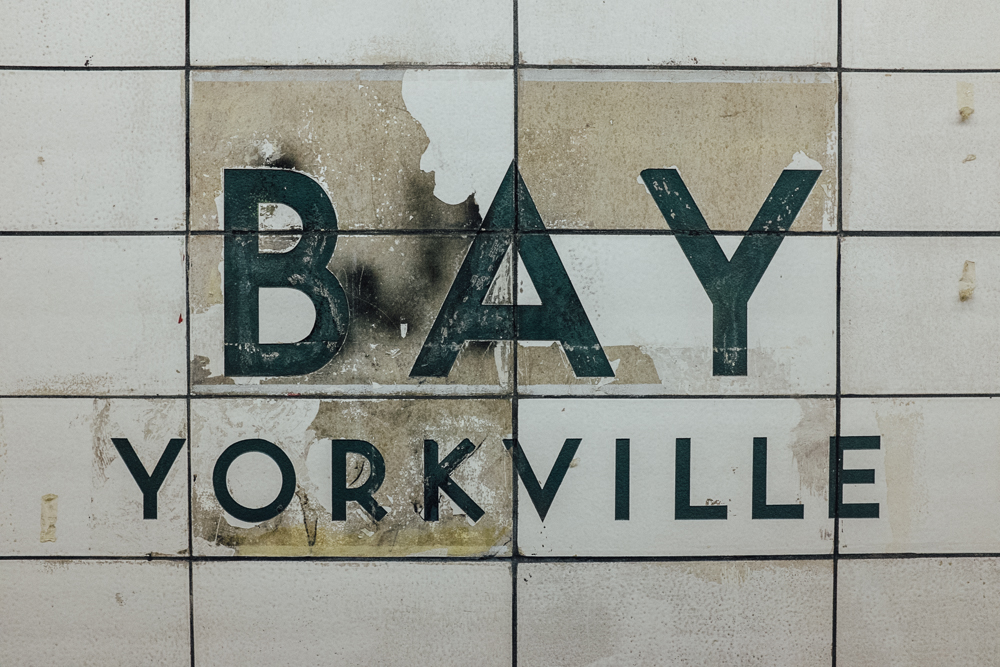 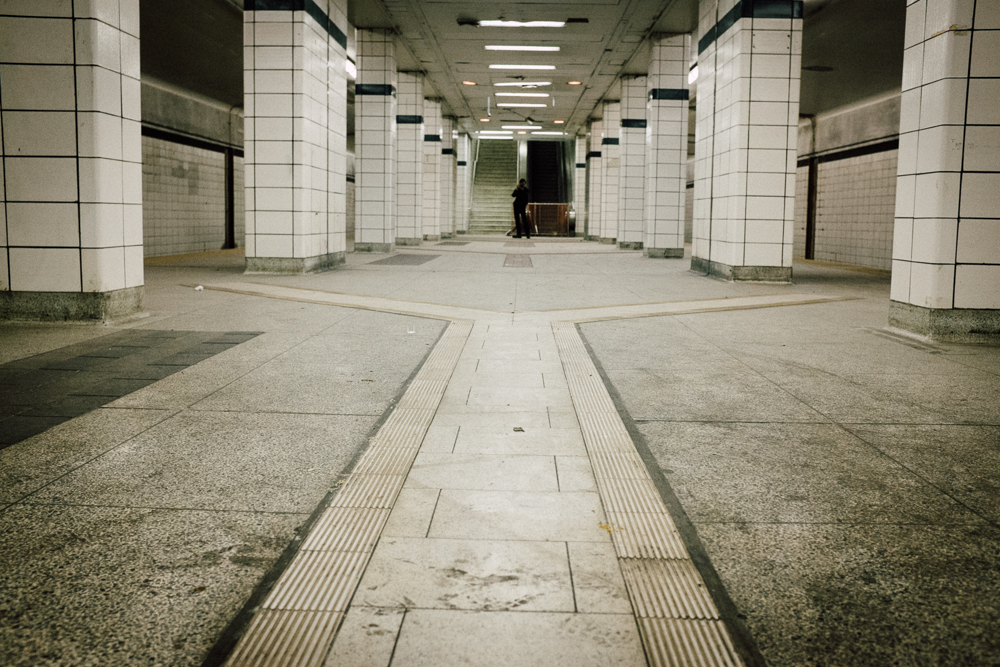 Lower Bay was not sealed off from the world completely, however.  The station and surrounding tracks are used today for employee training, switching trains between lines, and testing new signage.  The station might also have made an appearance in one of your favourite movies or TV shows — dozens of productions have had scenes filmed in Lower Bay, including Suicide Squad (2016), Shazam! (2019), and an episode of The Handmaid’s Tale “Nolite Te Bastardes Carborundorum” (2017).  Lower Bay can also be rented as an event venue, and has been opened to the public during Doors Open Toronto. 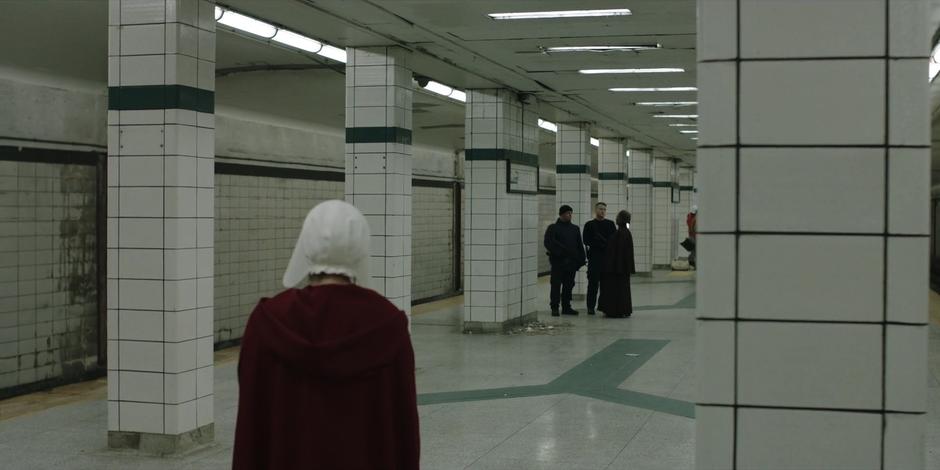 With the Greater Toronto Area growing every day and quality public transportation becoming more important than ever, there is no question that Toronto’s subway system needs improvement.  Many stations on the Yonge line are over capacity during rush hours, and thousands of delays per year contribute to slow service and claustrophobically crowded stations.  Furthermore, Norman D. Wilson’s prediction that the transfer stations Bloor-Yonge and St. George would experience massive overcrowding has come true, with the platforms becoming dangerously packed when trains are delayed.

As the city debates how to alleviate this problem, the possibility of bringing Lower Bay back to regular use has been brought up more than once.  In the 1990s, the city considered having several trains per day switch lines via the Lower Bay tunnels (without stopping in the station itself), although this proposal was shelved in 1995.  Additionally, in 2014, award-winning engineer Dr. Josef Kates proposed that reviving Lower Bay would increase the capacity of the entire subway system by reducing wait times at Bloor-Yonge, allowing at least six more trains per hour to move through the station.  Nothing has come of this proposal, however.  While the Greater Toronto Area has been riding a wave of population growth and housing construction for many years, bureaucracy has made the process of expanding the subway system dreadfully slow: the Downtown Relief Line, first proposed in the 1980s, was only recently approved to become a reality and is expected to be complete by 2031.  Infrastructure that considers future population growth is needed now.

Apart from Doors Open Toronto, those who are curious about Lower Bay can see traces of the pilot project remaining throughout the subway system.  Some stations still have signs indicating the endpoint of the next train, a relic of when trains would switch lines.  Furthermore, a commemorative plaque to Norman D. Wilson hangs in the mezzanine of St. George station. 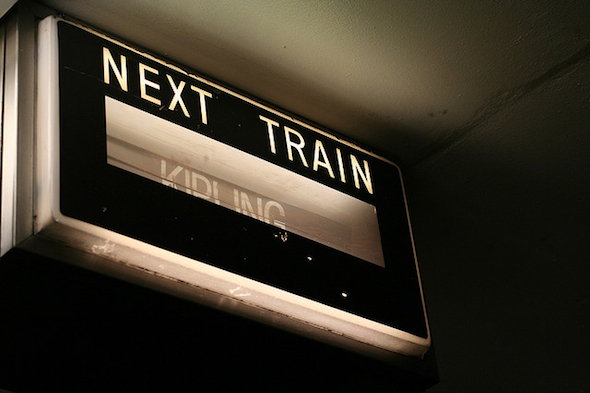 Lower Bay has a significant online following, with urban explorers sharing their experience breaking into the station, rumours of hauntings, and plenty of articles chronicling Lower Bay’s makeovers for media appearances.  Whether Lower Bay is brought back to service or remains a hidden treasure under the streets of Toronto, the station’s contribution to Toronto culture – from bringing in movie production to generating urban legends – is invaluable.