About a year ago, I wrote an article called “Kim’s Convenience Will Always Have a Place in My Home”, looking at the positive impact the show has had on me and my mother. Since then, a lot has changed. I became busier trying to keep up with school demands throughout the year, leaving little time for watching TV shows or movies. When Kim’s Convenience released its fifth season, I didn’t notice. It’s only when I started hearing about the controversies surrounding the show that I began to tune back into what was going on.

After the promise of a sixth season CBC reversed its decision, choosing to abruptly end the show on its fifth season. It confirmed that its co-creators, Kevin White and Ins Choi, were moving on to other projects. In June, Simu Liu, who played Jung, criticized the lack of East Asian and female representation in the show’s writers room and the missed opportunities and lack of growth of his character. In addition, he claimed that he and his fellow cast members were underpaid, especially compared to Schitt’s Creek, another popular show with “brand-name” talent but lower ratings. Jean Yoon, who played Umma, later spoke up to defend her co-star, saying that the lack of female Asian writers and specifically Korean writers made the experience working on the show painful and difficult. She pointed to the racist storylines that the cast expressed concerns over, and how she was dismissed and disrespected by writers and producers.

All that said, is it worth watching season five? 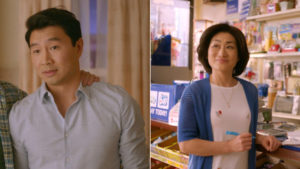 I can’t say, because I too have been debating on whether to watch it or not. Having the rose-tinted glasses being ripped from my face makes me scared to look at the screen and see the show for what it truly is. From the reviews I’ve read so far, many fans were  disappointed. With so many other good shows out there, why should I watch it when there is a high possibility I could be disappointed as well?

But let’s take a step back here. I’ve watched movies before knowing that it was going to be terrible. Camp Rock 2, The Fantastic Beasts sequel, the Mulan live remake—all hours of my life I will never get back. So why is this different? Why can’t I bring myself to watch season five?

Because this isn’t how Kim’s Convenience was supposed to end. I’m not talking story-wise, but rather its legacy. It feels like a slap in the face to have a show being praised for its Asian representation, but then having a writer’s room full of white writers and hearing about the mistreatment of the cast members behind the scenes. And to add salt to the wound, only Shannon Ross, a white supporting character played by Nicole Power, gets a spin-off?

Suffice to say, the magic of the show has been ruined for me. I don’t blame Simu Liu and Jean Yoon for speaking up; they were right to do so. Hopefully, this will prevent future shows from treating their cast in the same way. But who’s to say this won’t happen again?

In light of these complaints, I’m starting to wonder if there were problematic aspects or storylines that I’ve overlooked while watching the show. In an LA Times article, Dakota Kim points out that in the season four episode “The Help”, the storyline attempts to explore unconscious bias, but ends up—perhaps unconsciously—implying that an Asian Canadian woman unfairly won an award mostly due to white guilt. In the episode, which takes place at her daughter Janet’s art competition, Umma is mistaken for a server by a white judge. When Mrs. Taylor goes to apologize to Umma, she misinterprets Umma’s confidence that Janet will win as a demand that Janet should receive the reward to make amends for the discrimination. The storyline fuels the myth that people of colour are admitted into colleges, win competitions or are given jobs because of affirmative action. Ultimately, it implies that despite not knowing whether she really earned it or not, Janet should be happy with the award. 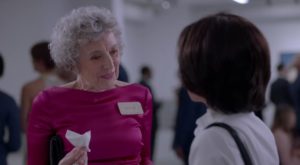 Mrs. Taylor and Umma in “The Help” (Image Source: IMBd)

The first time I watched that episode, I was a little uncomfortable with how they handled the storyline. Ultimately, I dismissed it because I wasn’t sure why I was uncomfortable, and I didn’t know how to verbalize it. Besides, the rest of the show was good! It’s just one little mistake on the part of the writers… right?

If I were to rewatch Kim’s Convenience, how glaring would its flaws be? At what episode would I say, “enough is enough” and watch something else? Would it be possible for me to continue watching and enjoying it for what it is, despite its shortcomings? Just as Crazy Rich Asians was critiqued for its treatment of its South Asian characters, or In the Heights was criticized for its colourism and lack of Afro-Latinx representation, I know movies don’t have to be perfect to be enjoyable.

Or maybe I wouldn’t notice any of the flaws. I don’t pretend I’m a certified “woke” Gen Z member, educated on all things Asian, but I am a little disappointed in myself that I didn’t spot the red flags that this show wasn’t the feel-good comedy I imagined. It goes to show that we all have more left to learn when it comes to social issues. Maybe I won’t be able to learn everything, but that shouldn’t stop me from trying.

In my past article, where I wrote that Kim’s Convenience will always have a place in my home, was that a lie? A conditional statement? I’d never thought it would turn out this way, but here we are. I’m reluctant to give it up entirely, since it gave me and my mother a show to bond over. But she’s moved on to other shows, and so have I.

Parting with Kim’s Convenience feels like going through a bad breakup, but I don’t see a future with us together. I will continue to follow the cast members (anyone else excited for Simu Liu’s Marvel debut?), but this is my farewell to the show that could have been legendary.