When the views from her airplane ride to Houston, Texas for a photography conference left artist Shelley Niro astounded, she propelled her energy to create The Shirt (2003)— a five-minute performative documentary that subtly highlights the injustices inflicted upon Indigenous Peoples in the form of souvenir T-shirt slogans. According to the Art Gallery of Ontario (AGO), Niro recalled the way the land was partitioned, indicating ownership, and how it reminded her of the complex history that took place on that land. Her obligation to do something about her unsettling experience sparked her inspiration for The Shirt. 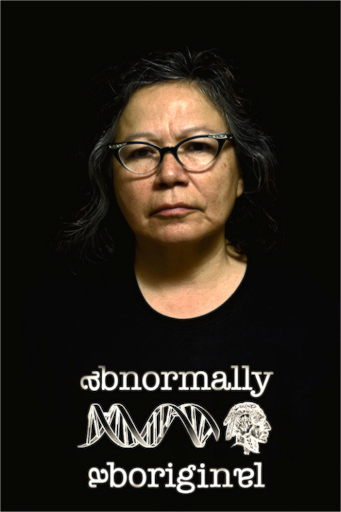 For those unfamiliar with the artist, Shelley Niro is a Mohawk filmmaker and visual media designer from New York. She was born in Niagara Falls, New York in 1954 and grew up on the Six Nations of the Grand River Reserve, near Brantford, Ontario, Canada. She is noted for her work that challenges the clichés and stereotypes associated with the Indigenous community, especially women.

She is recognized for her films such as It Starts With A Whisper (1992) which won her a Walking in Beauty Award, and Honey Moccasin (1998), which won her the Best Director award at the Red Earth Festival in Oklahoma City, Oklahoma. The Shirt was presented at the 2003 Venice Biennale and the 2004 Sundance Film Festival. In 2017, she won the prestigious Scotiabank Photography Award. Niro’s art has been featured in several exhibitions and museums across Canada and the United States, including the National Museum of the American Indian (NMAI). 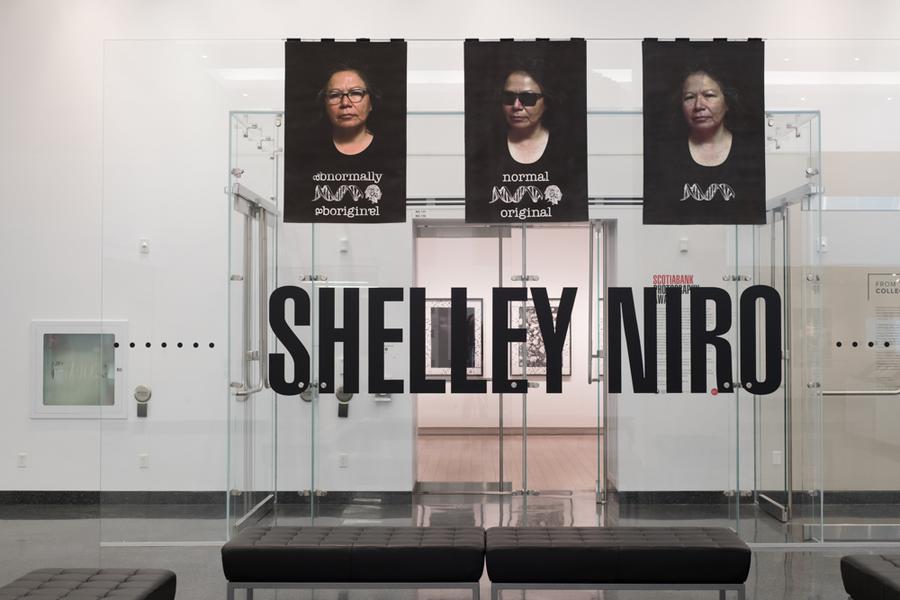 With a brilliant career as an artist and a filmmaker to her credit, Niro has constantly worked to produce films and digital collages that address land, border, and treaties issues and, perhaps most importantly, Indigenous women. What makes The Shirt (2003) stand out from her other amazing work is the fact that it is an excellent amalgamation of her determination to challenge the stereotypes against Indigenous Peoples in a single, powerful work.

The film starts with a landscape of a city on what seems to be a windy day with calm acoustic music in the background. The snowy city landscape then transitions into a green valley-like background. We see a woman of Indigenous background, facing sideways, laughing, and wearing a white shirt that says “The Shirt” in bold and underlined. She is also wearing an American flag bandana. The next shot is of a river; the calm music still playing.

The following shot is of the same woman with a serious expression on her face, but this time the text on her shirt speaks about violence against Indigenous Peoples. The entire clip transitions from a shot of nature back to the same woman with a different text displaying the atrocities committed against Indigenous Peoples every time. There is a shirtless shot of her where she looks grimly at the camera, which symbolizes how the land was literally snatched from her ancestors. The second last shot ends with the woman’s shirt saying “And all I get is this shirt”, then shifting to another woman with the same shirt who is smiling at the camera with a full face of makeup, followed by the end credits.

Niro’s illustrious choice of bold imagery and words resonate with audiences from various cultural backgrounds, especially minorities who have been subjected to colonialism in the past and help provide a critical aspect to it. With each shot, it makes you pause and rethink whatever you know about colonialism. People who are aware of the brutalities that Indigenous Peoples have faced may interpret this video totally differently than others. For them, this may come across as an emotional, engaging piece of discourse that has provided an outlet for their thoughts on the matter without stereotyping or judging them, especially if they themselves belong to an Indigenous community.

The film is a lesson to those unfamiliar with the history of colonialism and its effect on the Indigenous community. The imagery is loud yet subtly delivers a powerful message. The overall aesthetic and the constant backdrop of land helps to re-emphasize the relationship between land rights of the Indigenous Peoples and their self-determination.

The work currently hangs in AGO’s permanent collection and the film is available to watch for free on YouTube.