Back alleys — space between properties and streets — became a popular global urban planning trend in the Victorian Era to hide sewage, garbage disposals, and the back entryways of businesses from the public. Since then, these spaces have become a dull, overlooked, and unwelcoming part of cities. As a result, back alleys now take up a great amount of space but with little public attention and engagement.

Melbourne, Australia, took their low-traffic back alleys and transformed them into inviting public areas. Along with their physical innovative practices comes a new title; laneways. When people say back alleys, the dull and grimy idea described above comes to mind. When talking about transformation, it is important to recognize how a title carries an important role in reimagination. This may be a reason for Melbourne’s world-renowned laneways becoming inviting homes to eateries, bars, shops, street murals and performances, and residences. The city’s revitalization of laneways acts as a leading example for other cities to rethink their hidden, low-traffic spaces.

After decades of being passed by, rather than through, laneways in Toronto joined Melbourne’s initiative through the non-profit social enterprise The Laneway Project (TLP). After a year-long pilot program, the Toronto City Council approved the adoption of laneways throughout Toronto and the East York district as a plan for growth in a city with an urgent need to expand. Including  laneways being transformed into bike lanes and paths, public green spaces, and winter spaces.”

Toronto’s laneways were mixed-use in the late 19th century. They acted as avenues for trading, dairies, blacksmiths, and coal deliveries. Though, in an era with new challenges and needs, what role should mixed-use laneways play in the 21st-century city? 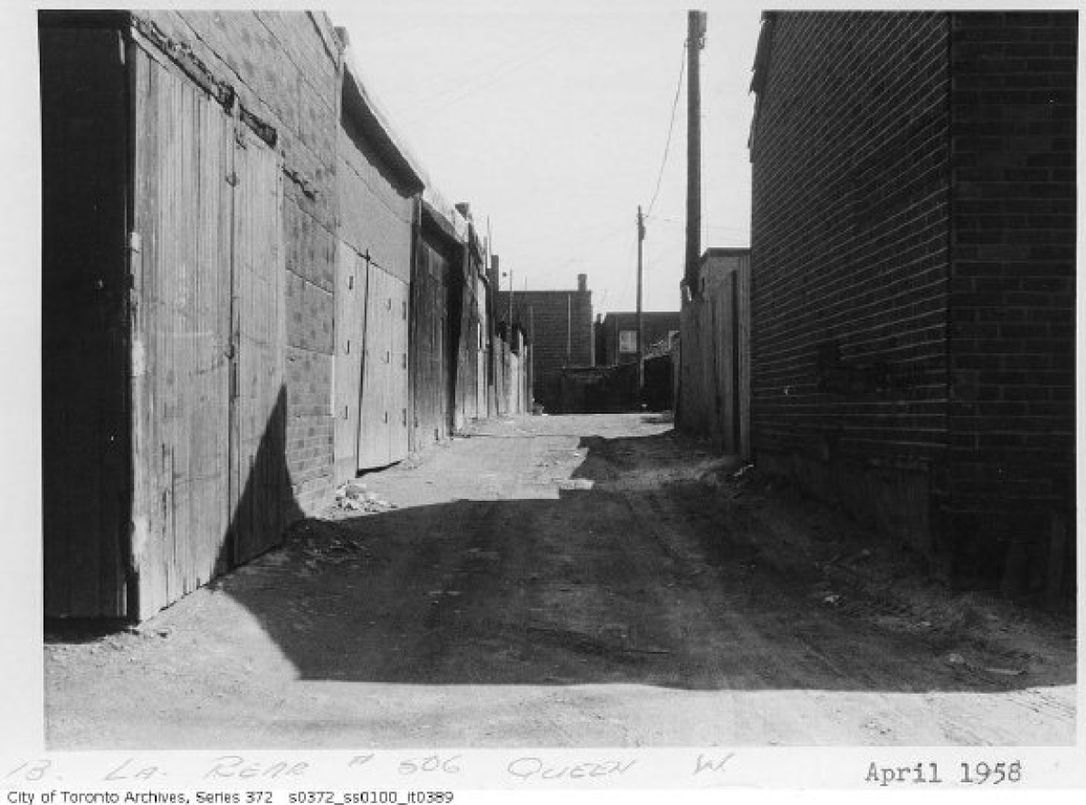 Laneways in a 21st-Century City

Toronto is experiencing an increase in population and a decrease in green space as the city tries to accommodate more cars, shops, housing, and offices. Currently, only 13% of the city is made up of green space, which is approximately 28 m² per person. To imagine this, Toronto’s square metres of green space per person is less than other large cities like Los Angeles, Houston, Chicago, and New York. The Parkland Strategy Preliminary Report expects this measurement of green space to only decrease over the next 15 years, to 21 m² per person. So, what better way to increase green space than to modify underused laneways?

Urban green space has more benefits than simply acting as a place for outdoor recreation. Globe and Mail journalist Hannah Hoag states it also improves people’s depression and feelings of fatigue, helping those who feel drained by city life without even needing to leave urban centres.

Toronto’s partnership with the Canadian Urban Institute on the Laneways as Bikeways project aims to redesign laneways to help close gaps in the city’s cycling network. The report outlines the potential of Toronto’s laneways including biking paths, as the city currently ranks 7th in the most bikeable Canadian cities. Factors that make up the most to least “bikeable” Canadian cities list include the dangers and challenges faced by cyclists. Which, could be reduced by the current architecture of laneways where there is less car traffic. 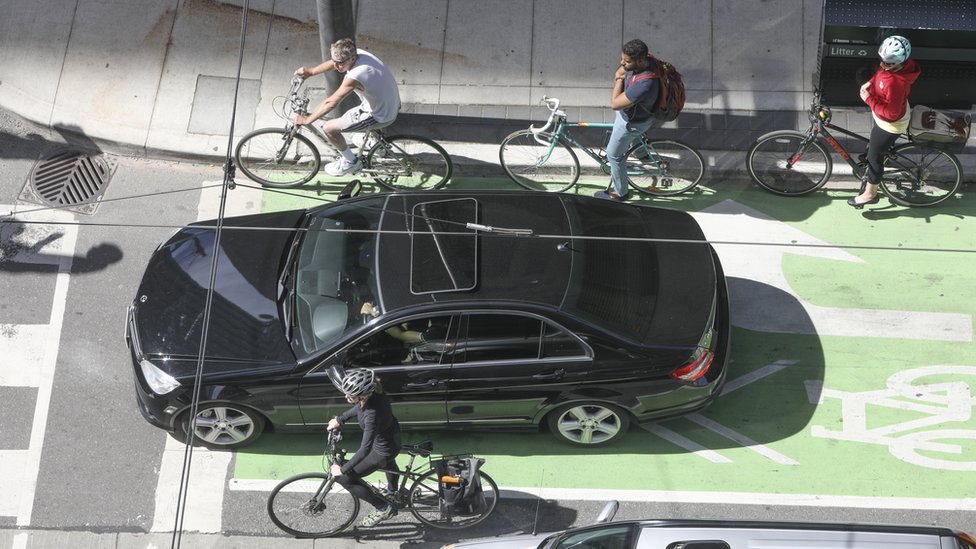 Car in Bike Lane After Rise in Cyclist Deaths in 2018. (Image Source: BBC)

Key findings from the report state that while laneways are a great resource to close the gaps in Toronto’s cycling network, they are not intended to replace bike lanes on roads. Laneways should be combined with cycle-friendly infrastructure and public green spaces that accommodate pedestrians and other forms of non-motor transportation as well.

Many of the least bikeable cities have encountered difficulty increasing their citizens’ inclination to cycle, and CBC suggests a lack of accessible and safe cycling infrastructure may be to blame.

To encourage and change citizens’ attitudes towards cycling, it is vital to connect neighbourhoods through an accessible network. Developing safe routes to and through urban centres allows for pedestrians and cyclists to commute safely and efficiently. 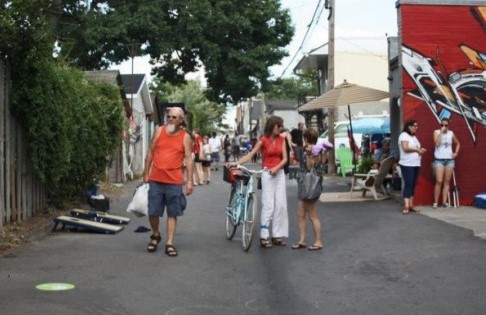 Who Is Transforming Toronto’s Laneways?

TLP knows laneways have the potential to become thriving public spaces that strengthen neighbourhoods, communities, and cities. This is why they organized their work in three main streams to turn neglected and vacant spaces of dirt and grime into inviting and accessible paths;

Co-founder and director Michelle Seneyah tells a reporter at the Torontoist “Greening laneways seems like an obvious opportunity,” in a city made up of 2,400 laneways, measuring 300 kilometres.

The placement of Toronto’s laneways is more so concentrated in older areas of the city, which have fewer parks and green spaces compared to younger areas of Toronto. Senayah explains, “When you look at where laneways are and where parks are, there’s actually something of an inverse relationship.” By an inverse relationship, Senayah means, between two variables, one increases as the other decreases. In Toronto, older areas have less green space but more laneways, and vice versa in newer areas of the city. 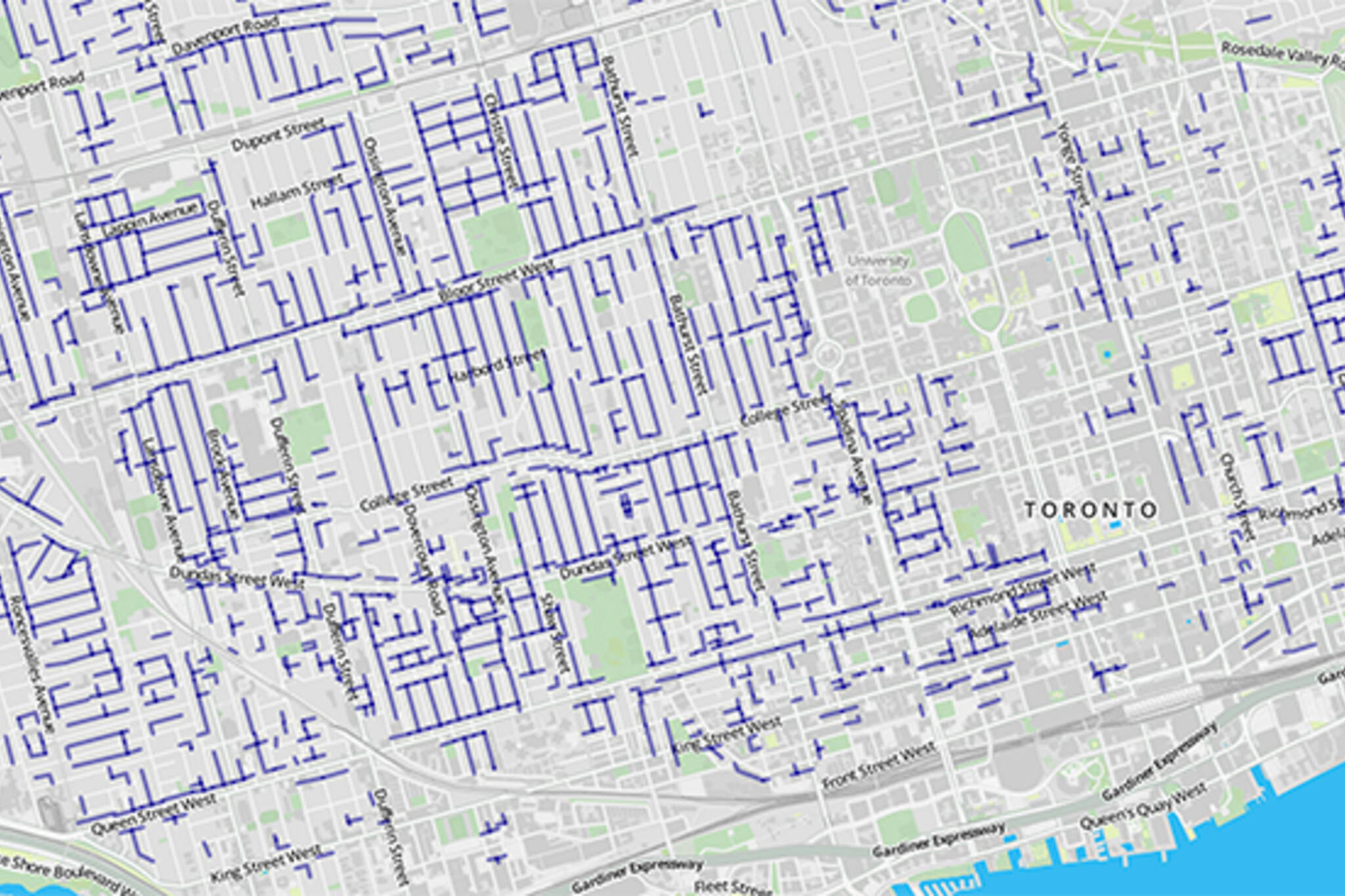 Map of Every Laneway in Toronto and Public Green Spaces. (Image Source: Blog TO)

To create accessible and inventive laneways, TLP works through a variety of stages to plan and coordinate spaces. Here is how they do it:

Firstly, TLP conducts place-based laneway assessments. These assessments analyze laneways for their potential based on their surroundings. As a result, TLP  develops visions and master plans for laneway transformations.

Next in line, they detail the designs for laneways, which can include urban furniture, lighting, public art, or wayfinding.

In order to ensure the public benefits from revitalized laneways and also uses them, TLP plans, coordinates, and manages public consultations. Here, they build local groups consisting of a diverse set of community and design stakeholders to examine the planning, design, and implementation of laneway projects. To keep transformed laneways sustainable and long-term, TLP creates local stewardship groups to protect and upkeep these spaces.

TLP analyses the best laneway improvement practices and placemaking from leading cities, including Melbourne! Such global practices include those that are best for social, economic, spatial, and regulatory contacts. TLP is not limited to implementing these practices in Toronto’s urban centres; they also work with municipalities to develop laneway-friendly policies.

(Just A Few) Accomplishments So Far

It may be difficult to imagine how a typical laneway goes from a neglected and uninviting space to a lively, colourful and welcoming one. The Placemaking and the Future of Cities Project for Public Spaces explains it as “back alleys, neglected courtyards, and stairways may escape our notice…yet if they are claimed, owned, and developed, they can be harnessed to strengthen and enrich their communities.”

Take a look at how TLP manages to do it: 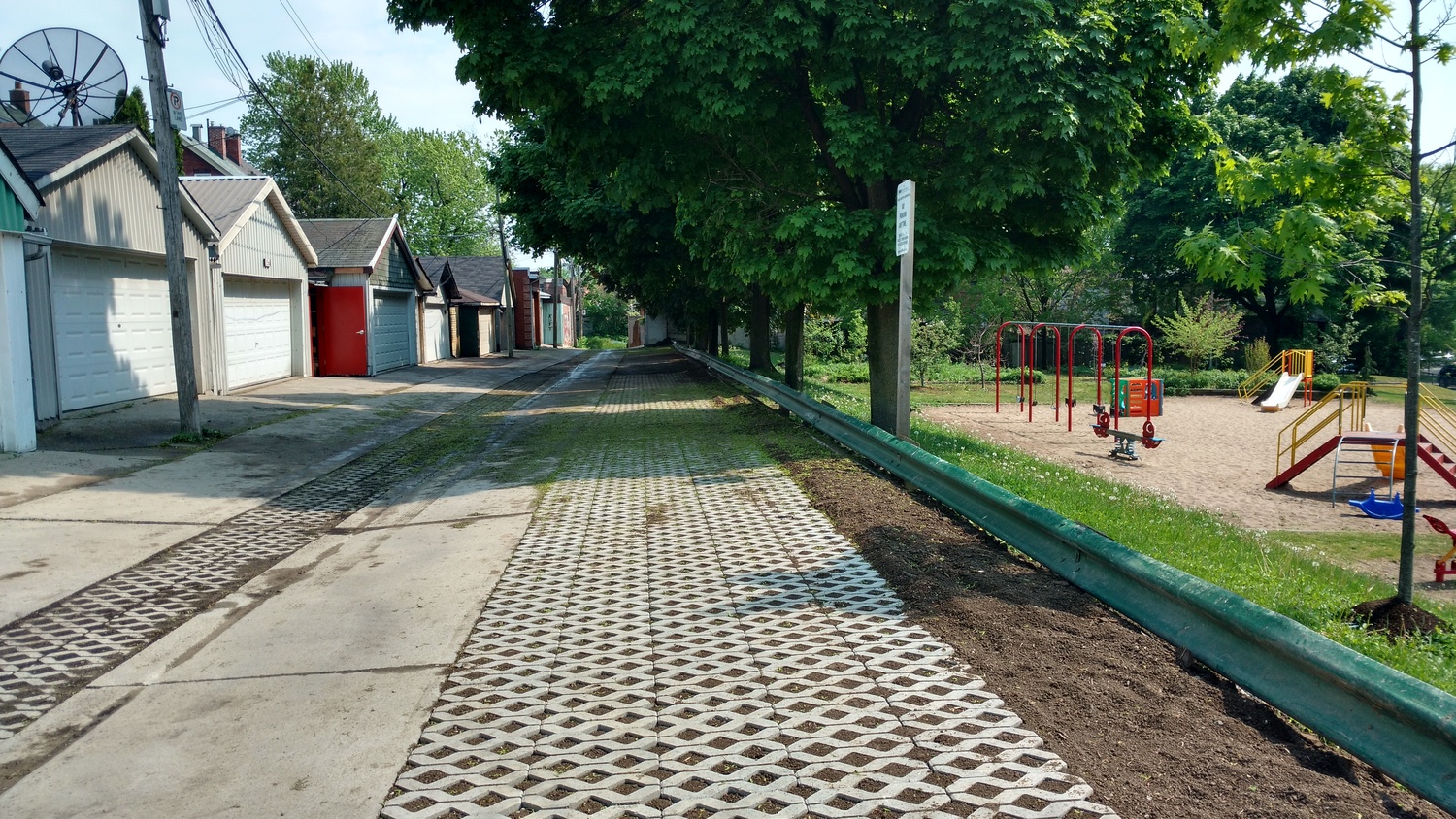 Funded by Live Green Toronto, Beautiful Streets, Public Realm Section, Transportation Services, and the City of Toronto, the Laneway Puncture Demonstration Project is a greening project in Willowvale Lane and a laneway next to Fred Hamilton Park.

The aim of the project was to demonstrate how a “unique landscape intervention strategy” has the ability to successfully transform the “ecological and stormwater management capabilities of laneways.”

To accomplish this, laneway punctures are strategically placed alongside central drains through the laneways. The installment requires pavement to be repaved with “open-celled pavers” with plant materials. Not only does this project enhance biodiversity in laneways, but it increases “ground permeability and divert[s] stormwater from the municipal sewage system by allowing it to percolate more slowly into the city’s soil.”

The laneway punctures were installed by community members as part of an engagement project bringing locals together and building awareness of the new development. 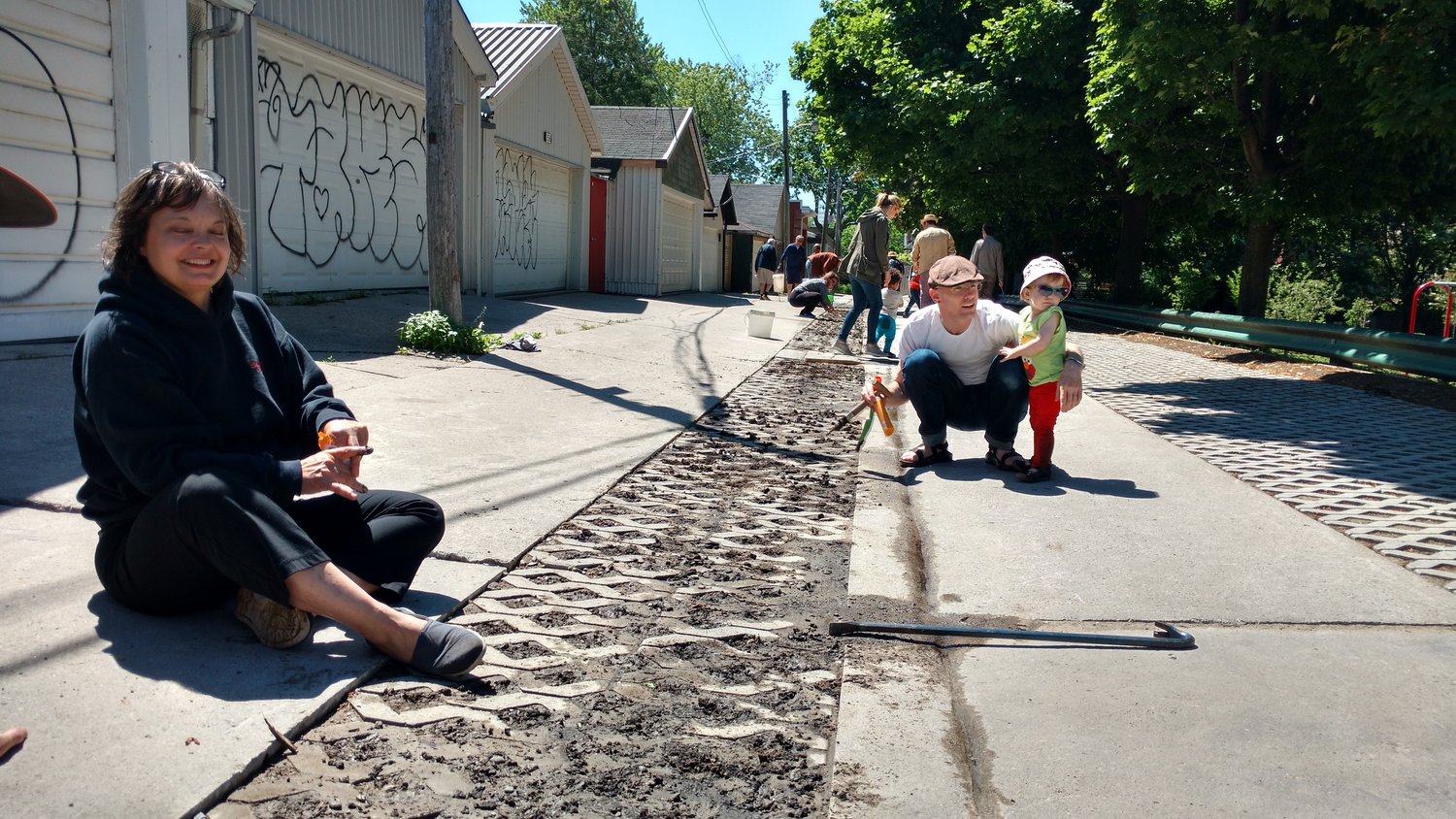 Although the project’s main objective is to amplify the process of the sewage system, its scenery invites the public to walk through the laneway, which acts as a new public green space. 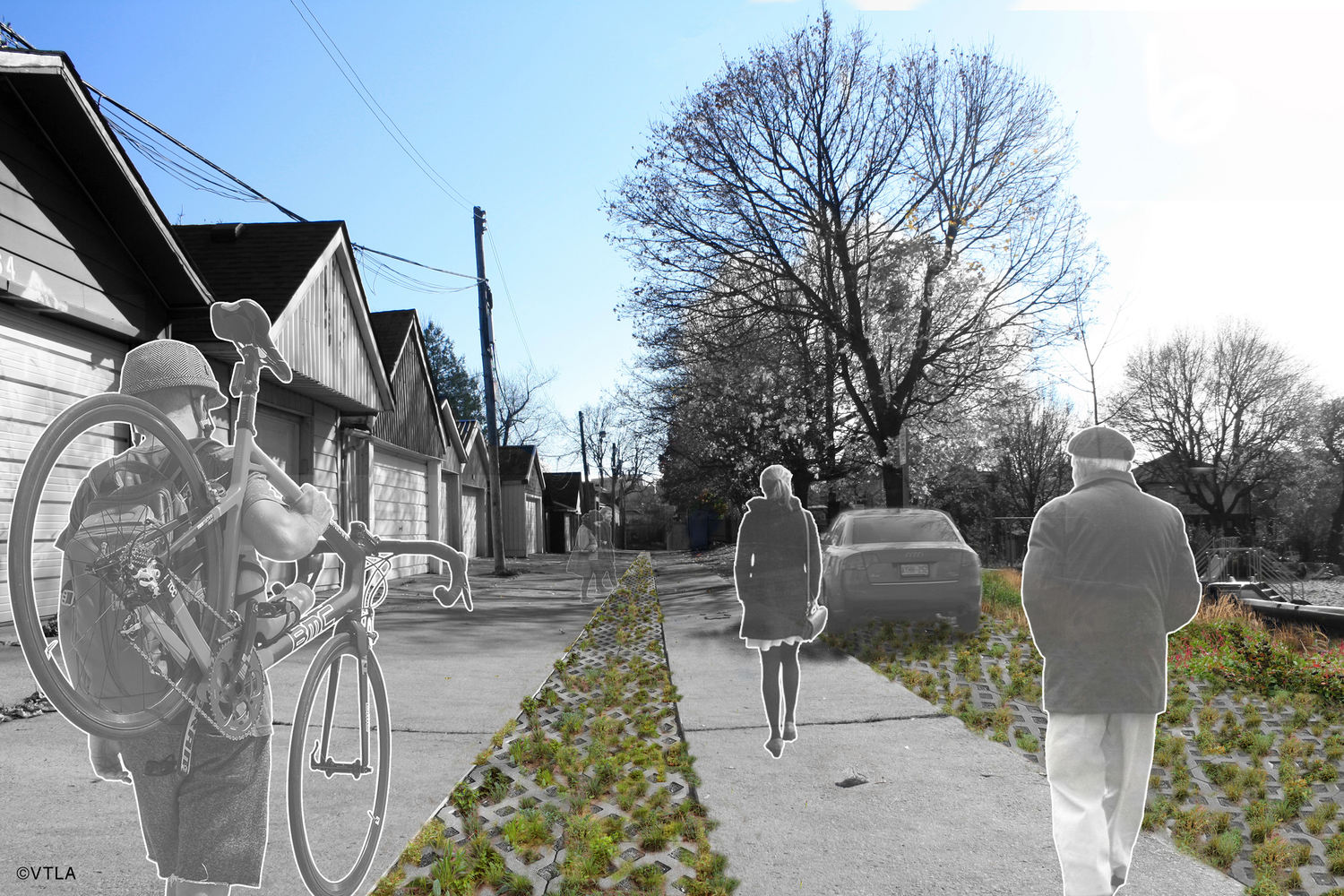 Reimagination of Laneway to Invite the Public. (Image Source: The Laneway Project)

With the help of one of their partners — the Beautiful Streets division of Transportation Services — TLP planned each laneway’s future by training “laneway stewards.” These groups are made up of local members to upkeep and monitor the project with the proper skills and knowledge.

Light Up the Laneways: Ossington and Bloordale

The multi-phase project was first established to demonstrate the best practices to revitalize Toronto’s laneways. After learning what ingredients are essential to create a vibrant laneway for Torontonians, TLP began implementing pedestrian-friendly lights, street art, urban greening, and even furniture to improve the safety of two laneways. 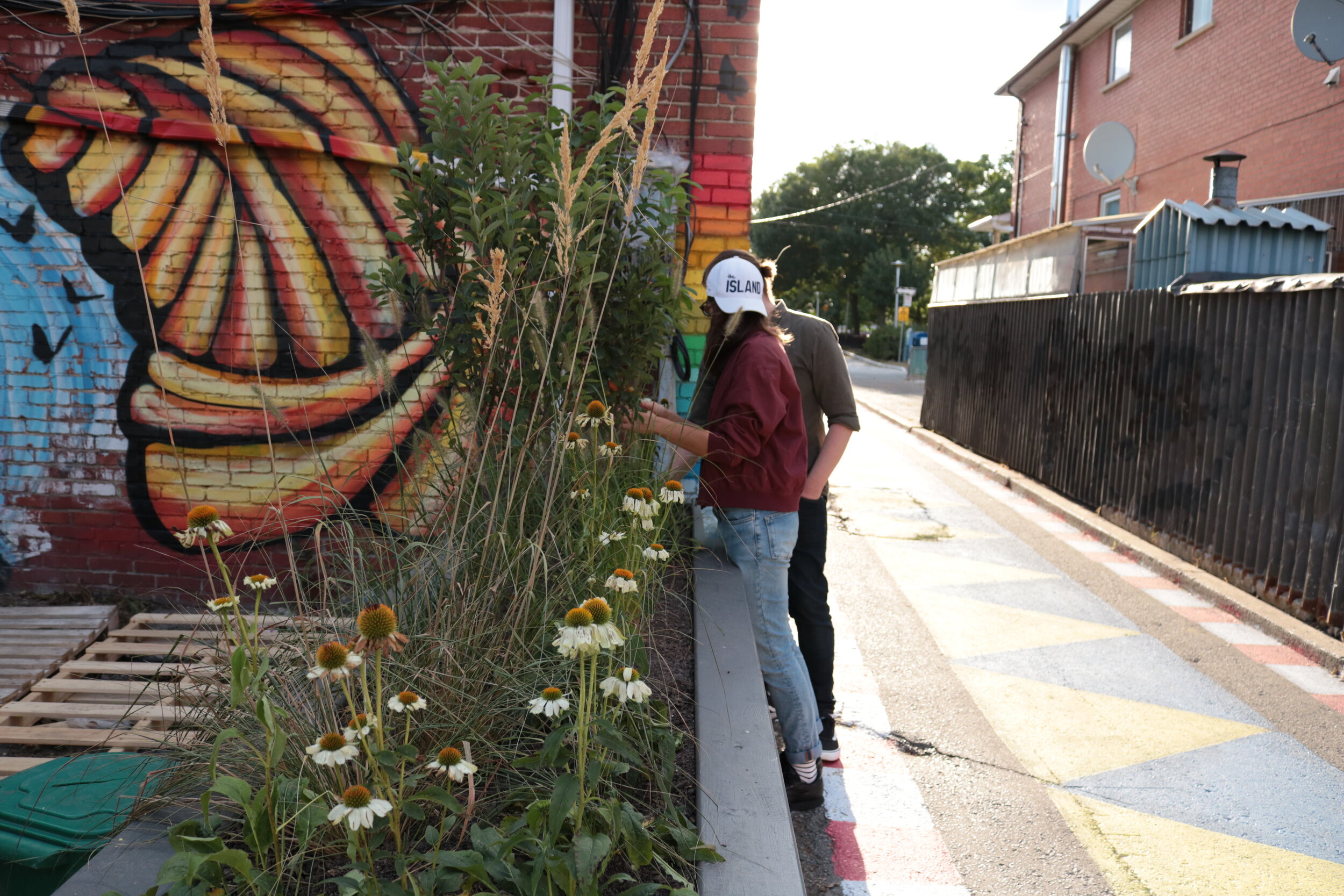 The new installments transformed these laneways into new, safe places to travel through, as these developments invite people to go through them rather than pass by them. 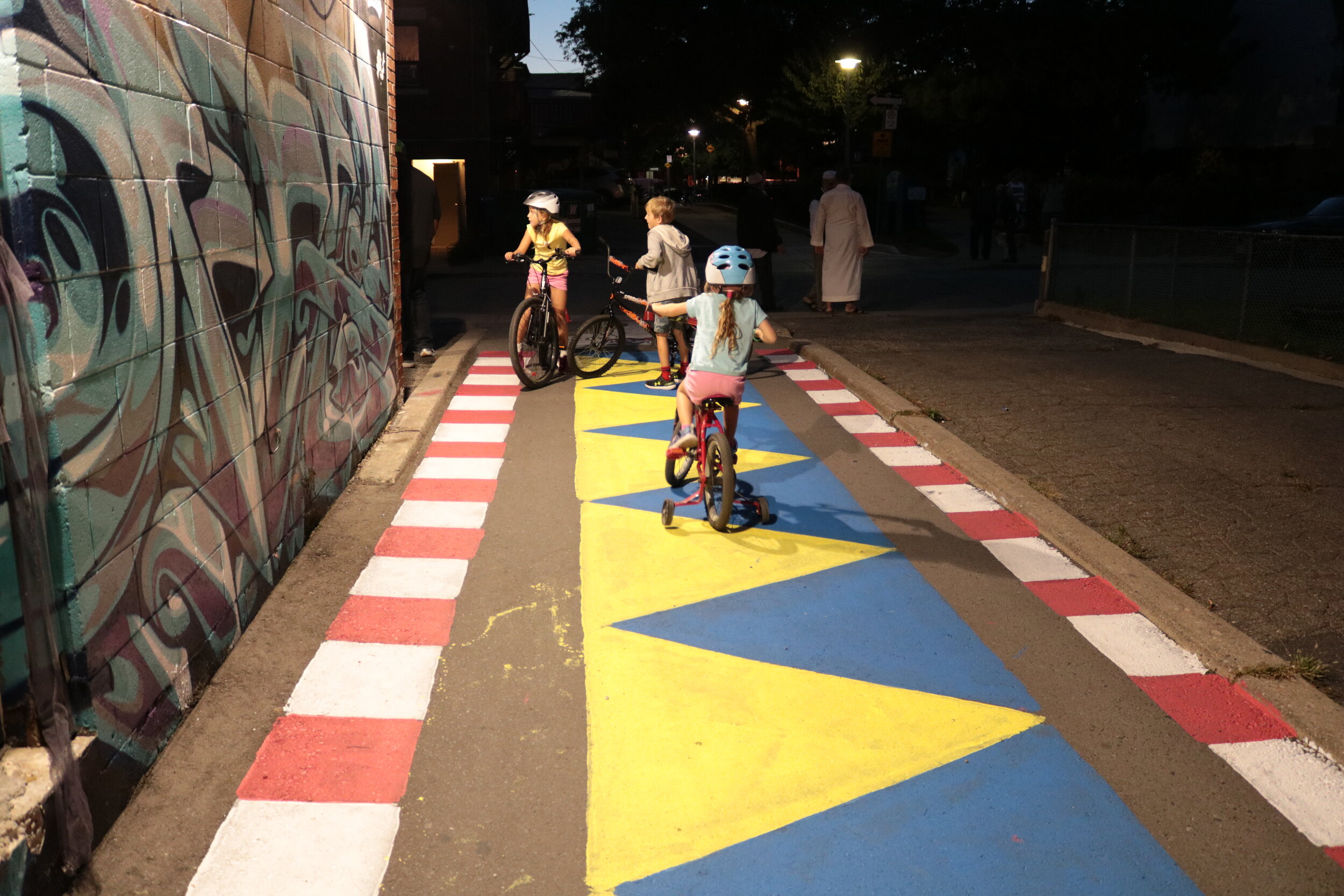 These spaces can be enjoyed as public spaces to cycle or walk through in both daylight and at night thanks to their partnership with the Ossington BIA, Ossington Community Association, Bloordale BIA, and Bloordale Community Improvement Association, in assisting them instal lights, bikeways, and art.

TLP’s latest project, Winterways, is a development creating winter-friendly laneways to build outdoor communities in the sun and the snow. Since COVID-19 restrictions have forced many activities to take place outdoors, the demand for public spaces has gained new importance.

Like most Canadian cities, Toronto experiences hot and cold, making outdoor engagements a challenge in the winter. TLP understood this challenge and designed laneways to be safe outdoor spaces that support current health guidelines. 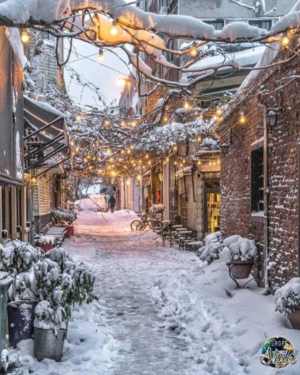 The urbanized winter laneway project is transforming three different laneways — the Leader Lane in St.Lawrence Market, Mcdougal Lane in Downtown Queen West, and Cosmos Nature Lane in Bloordale. These spaces will turn into inviting outdoor public spaces, even in -20 weather.

This exciting project will kick off next month in the form of a public meeting on winter activities, online meetings, and surveys for Torontonians to share their thoughts on the challenges of public outdoor spaces in colder months.

The next stage is to design “permanent improvements to address these challenges and make the most of local winter opportunities.” 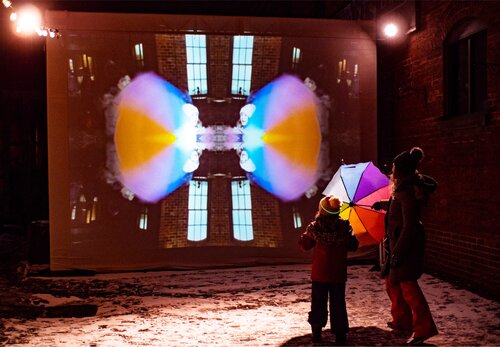 Art Installment in a Laneway. (Image Source: The Laneway Project)

These improvements will begin in the fall of 2021 to ensure spaces are prepared to serve the public for the first time this coming winter.

Since TLP’s first development in 2015, they’ve embarked on over 24 laneway projects, bringing liveliness to Toronto’s underused spaces. Although the non-profit social enterprise is reimaging Toronto like no one else, laneways as mixed-use spaces pose endless possibilities.

As we enter our second summer of the COVID-19 pandemic, utilizing outdoor space will gain new importance. Toronto Councillor Mary-Margaret McMahon understands this and says “unlocking these assets is a key part of creating safe, accessible spaces for residents to enjoy.”

More information on TLP including their past, current, and projected impacts are available on their website. 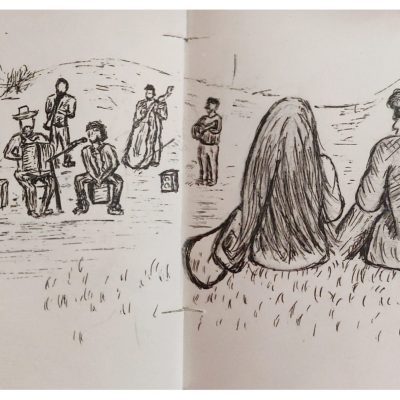