When you hear the word “space,” what do you think of? Telescopes, constellations, different planets — not only does the term “space” include these common examples, but it also consists of lunar calendars, star paths and zodiacs. All of these were discovered by civilizations and ancestors that came before us. Space is a broad concept — one that even now, we don’t fully understand. However, it is because of two of the most powerful ancient civilizations in history that we possess the knowledge and understanding of space that we use today. For centuries, India and China have been world leaders in art, technology, music, architecture, and innovation. Both had practiced the art of astronomy through the use of sun dials, hieroglyphics, and documentation. These provide more information on how their civilizations operated, as these cultures did not have many other written documents illustrating their mathematical and scientific thinking process. These tools reveal how our space technology is a result of their ideas evolved.

“We owe a lot to the ancient Indians, teaching us how to count. Without which most modern scientific discoveries would have been impossible.” – Albert Einstein

Not unlike other cultures, the Indians were heavily influenced by religion in their space endeavours. Also similar to many cultures, the Indians developed means to document their findings. These documents were known as the Vedas. These were a collection of Hindu hymns including poems, prayers, formulas, myths and beliefs. 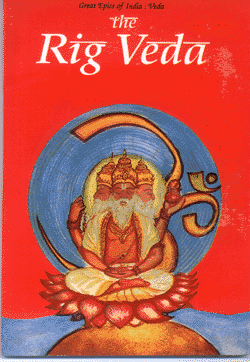 In the Rig-Veda, it is depicted that the Ancient Indians divided a year into 360 days and then further subdivided that into 12 months consisting of 30 days each.

Along with religious texts, the Indians had many forms of technology which, in turn, allowed them a nuanced understanding of astrological bodies and processes. Though they didn’t yet have telescopes, they had other mechanisms which they used frequently. These included sundials, celestial observatories and the Jantar Mantar — which was able to track the movement of the moon and sun in order to hypothesize dates for events, and could even map the stars. The latter of these feats was not one easily accomplished, however using the Jayaprakash Yantra, which is a crucial section of the Jantar Mantar, the Indians were able to mark the position of the stars. Essentially, with the Jayaprakash users were able to align the position of a star with various markings. 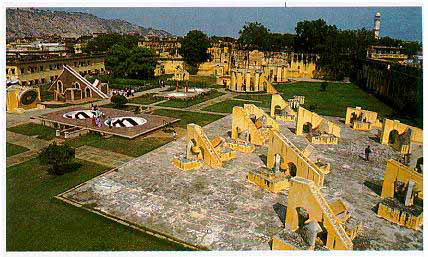 Beginning in the first millennium, Indian astronomers began to shift from a very religious mindset to a more scientific one.  It is acknowledged that some verses from the Vedas include texts that hypothesized the fact that our sun was a star, much like the stars that appear when the sun falls below the horizon.

This means that the Indians were one of the first cultures to theorize that the sun was a star. In addition, the ancient Indians theorized gravity in the 6th century, while Newton would not develop his own idea of gravity until 1100 years later.

However, India wasn’t the only country that made definite vicissitudes in space exploration. China also made exemplary choices and discoveries and forged their way as one of the greatest forces in the understanding of space during their time.

Like several other ancient yet advanced cultures, there is reason to believe there was thought into astronomy much before the first written document. For example, though the first Chinese records of astronomy are from 3000 BCE, the Beijing Ancient Observatory possesses pottery from over 5000 years ago with images drawn of the sun, stars, and planets. There are also animal remains carved with many different astronomical events dating back to 1400 BCE.

The Chinese became very adept at working with the stars, so much so that they began creating zodiacs, symbols, and constellations to better understand their calendar. They first created what was known as the 28 mansions, related to the movement of the moon as the first day of the cycle of 28 mansions corresponds with the first day of the traditional Chinese month. The ancient Chinese then decided to divide the 28 mansions into five main sections known as “gong.”. These five sections were the North, South, East, West, and a middle region. Each of these sections represented a totally different aspect of Chinese culture, and each had a different image and colour relating to the constellations.

The first of these four sections — not including the middle region — is the Azure dragon, or blue dragon, which represents the east and springtime. Though it could look menacing to some, the dragon was actually known to be thoughtful and wise. The dragon is often connected to the term “feng shui,”and is associated with the element wood.

The next is the black tortoise, representing the north and the winter. The tortoise is most commonly depicted wrapped inside a snake because these two animals were believed to have created the earth. Ancient Indians also believed the snake and the turtle to be a part of creation and is associated with water.

The red bird represents south and summer. This bird can sometimes be depicted as a phoenix. It is said to bring good fortune and is often paired with the blue dragon. This is associated with fire. 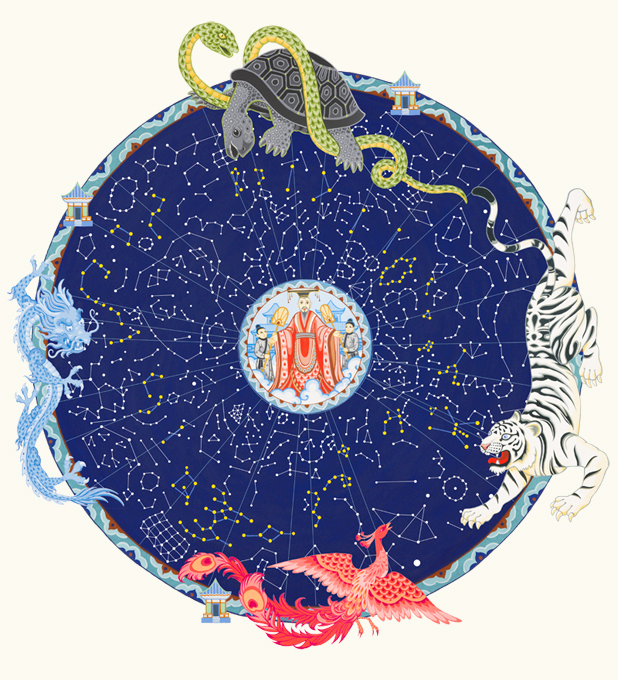 Finally, the white tiger represents the west and autumn. It is often seen as a warrior; protector of the dead and the emperor’s armies and is associated with metal. Though these symbols may seem preternatural, they reflect much of the ancient Chinese’s style in space understanding. As stated earlier, the 28 mansions and 5 sub-sections were used to create their calendar and heavily affected their zodiac.

Not only were the methods of these two cultures efficient systems of learning about what goes on above their heads, but they created a precedent for space technology and interest in such matters. As we, globally, become increasingly invested and advanced in space travel, I feel we must look back on the foundation laid by these civilizations.