Eli Malk Island, in the Western Pacific country of Palau, is famous because of the unique Golden Jellyfish that only inhabit its lakes. They capture of the essence of Robert Frost quote “Nature’s first green is gold/Her hardest hue to hold” as the weather cycle named El Niño tampers with the conditions the jellyfish need to survive.

Golden Jellyfish
Golden jellyfish have unusual anatomy which causes them to thrive in shallow depths and depend on sunlight for survival. An algae called zooxanthellae lives safely within the jellyfish’s tissue. The algae eat by means of photosynthesis, which gives off energy as a byproduct that is later used by the jellyfish.  Both organisms benefit from the relationship, as long as the jellyfish have access to sunlight to start the photosynthesis process.

The jellyfish survive on this diet of sunlight by gathering around the western shore at the dawn of each day. They follow the sun along its path to the eastern edge of the lake, slowly pumping water through their bells, using jet propulsion to swim. This stirs up the lake water and disperses nutrients and smaller organisms that feed the rest of the ecosystem. After completing this act, they rest until sunset, and then return to the western shore until morning. 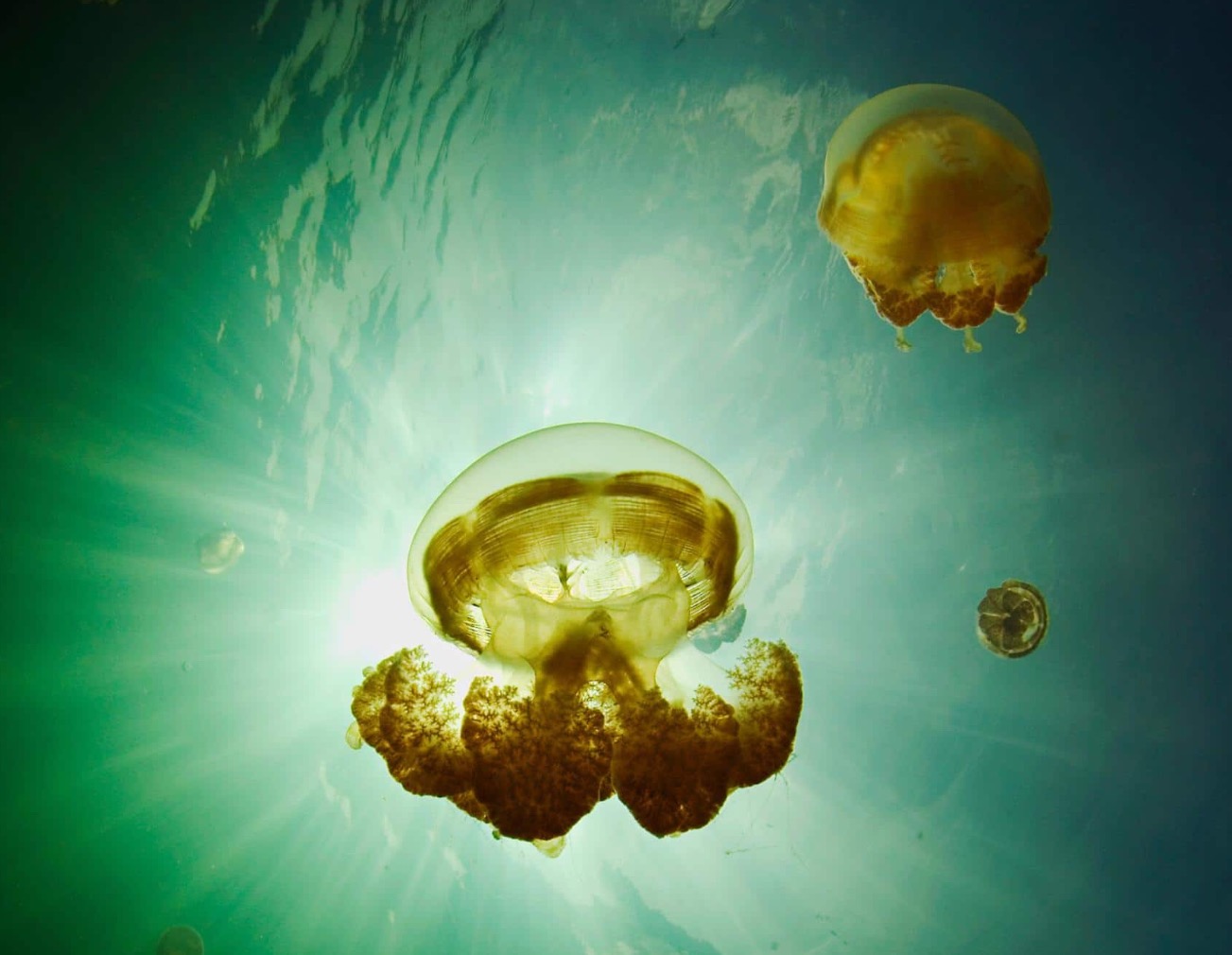 These jellyfish have a mild sting, which only harms human beings after extremely prolonged contact. They have such a gentle sting because there is a lack of predators in their habitat that would cause jellyfish to retaliate.

In comparison, ordinary jellyfish inhabit oceans around the globe, and live in deeper water than the golden jellyfish of Palau. Jellywatch reports that jellyfish contribute the ocean food chain by “eating small plants, zooplankton, fish eggs, and other small fish called Larvae.” Most have stinging tentacles they use to protect themselves from predators in their environment. Jellywatch also notes that “jellyfish are not strong swimmers, so they are at the mercy of ocean currents.” This behavior is notably different from golden jellyfish—which explains why golden jellyfish have garnered so much attention as a tourist attraction for scuba divers who wish to swim in their lake.

This tourist attraction is waning in popularity and profits because of the decreasing jellyfish population in recent years. National Geographic noted that “the lake’s population is at 600,000, down from an average of eight million.” The area’s rainfall in the past four months is the reported the lowest in 65 years, causing the lake to be saltier than ever. The culprit could be El Niño, a climate cycle in the Pacific Ocean, that impacts weather patterns around the world.

El Niño
Normally, cold waters swell upward, feeding ecosystems and fisheries on their journey in the South American parts of the Pacific Ocean. When an El Niño climate cycle occurs, there is less of an upswell of cold water, causing trade winds to be weakened in the Central and Western Pacific, and reverse the winds course. This unusually warm water causes rainfall to veer to the East because more energy is released into the atmosphere. 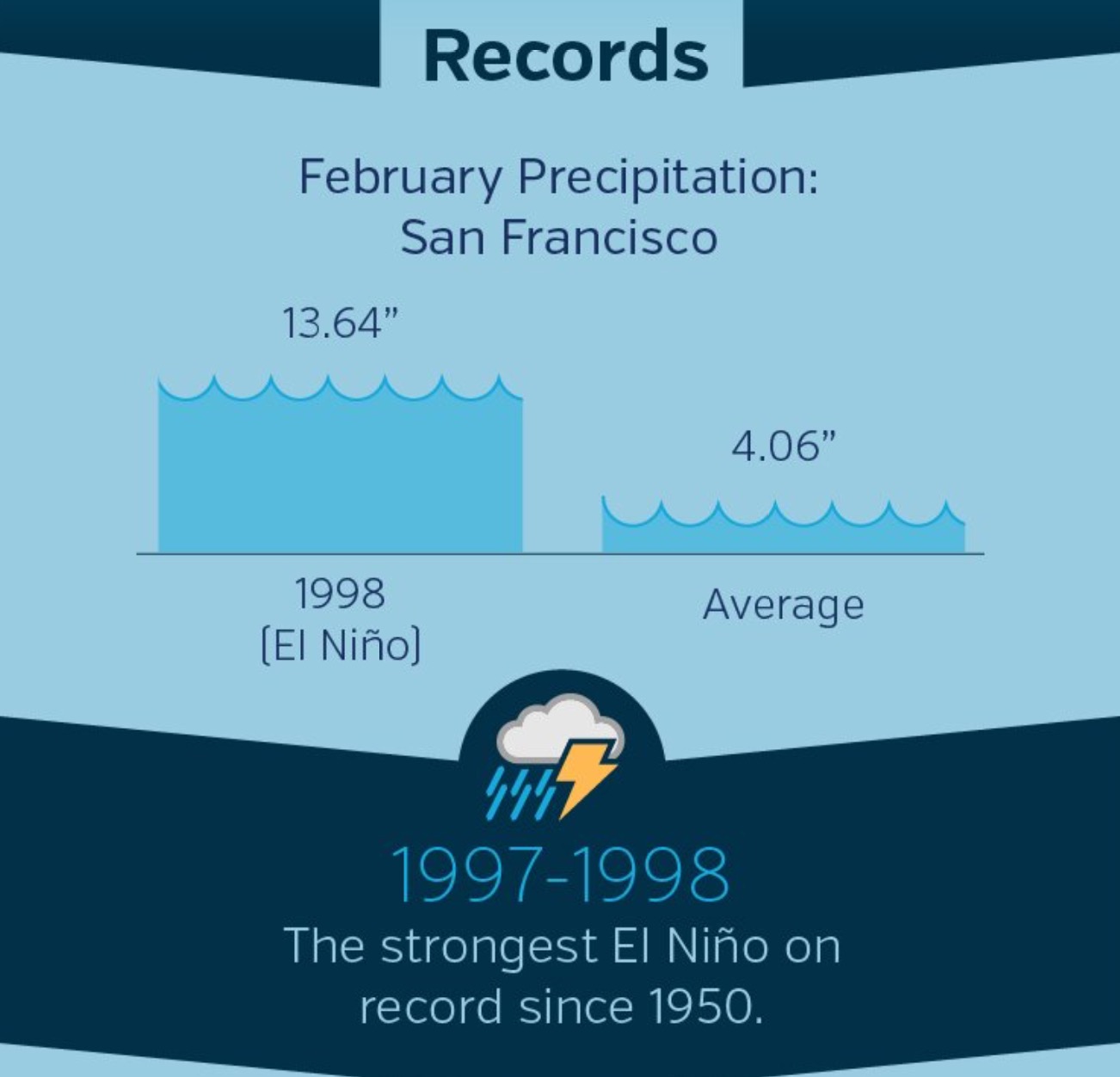 There is not a known cause to these abrupt changes—they are only common signs that an El Niño is about to break loose.  In the 1600s, Peruvian fisherman originally named these climate cycles “El Niño Navidad” because of their proximity to Christmas. “They come every three to five years, but may come as frequently as two years and as rarely as seven,” reports Live Science.  El Niño’s typically last about twelve months, forming in the spring, peaking in December and January, and decaying completely by May of the following year. They have branded themselves as quite an elusive storm with such varying characteristics.

El Niño contributes to climate change around the globe because it boosts the Earth’s temperature by 0.1 degrees celsius. This change, combined with human-caused pollution of gases, such carbon dioxide, caused record high temperatures in 2014 and 2015. These temperatures are not exclusive to areas by the Pacific Ocean — their effects are as far reaching as the city of San Fransisco, California.

Golden Jellyfish Versus El Niño
Springer recalls that one of strongest El Niño cycles was in 1997-1998, which caused the population in Jellyfish Lake to completely crash.  Some jellies were rediscovered in the aftermath, attached to the lake, called polyups, an early lifecycle stage of the jellyfish. They rode out the woes of destruction upon their changing habitat. When conditions improved, a new generation of jellyfish followed suit.

Scientists are unsure of the direct correlation between El Niño and the rapid decrease of jellyfish population. One theory is that there is less sunny days during the months of an El Niño cycle, which the jellyfish need to survive. These storms may disrupt the natural rhythm of their daily migration.

It seems that a solution would be to remove the golden jellyfish from their compromised habitat, and put them in captivity. Many endangered species seek refuge in zoos, or simply benefit from a change in environment. This relocation may cause shock from adjustment to a new ecosystem. Even if they could survive this transplant, the jellyfish’ access to sunlight during the event would be called into question, leaving them starved for energy. Most animals in captivity depend on physical food to live, which is easily provided. The demand for photosynthesis for the jellyfish may not be ensured in a captive environment because of the potential location of a tank, and the amount of sunlight the zoo or aquarium receives.  The zoo or aquarium may have trouble replicating such a unique ecosystem as Jellyfish Lake because it is the only one of its kind in the world. 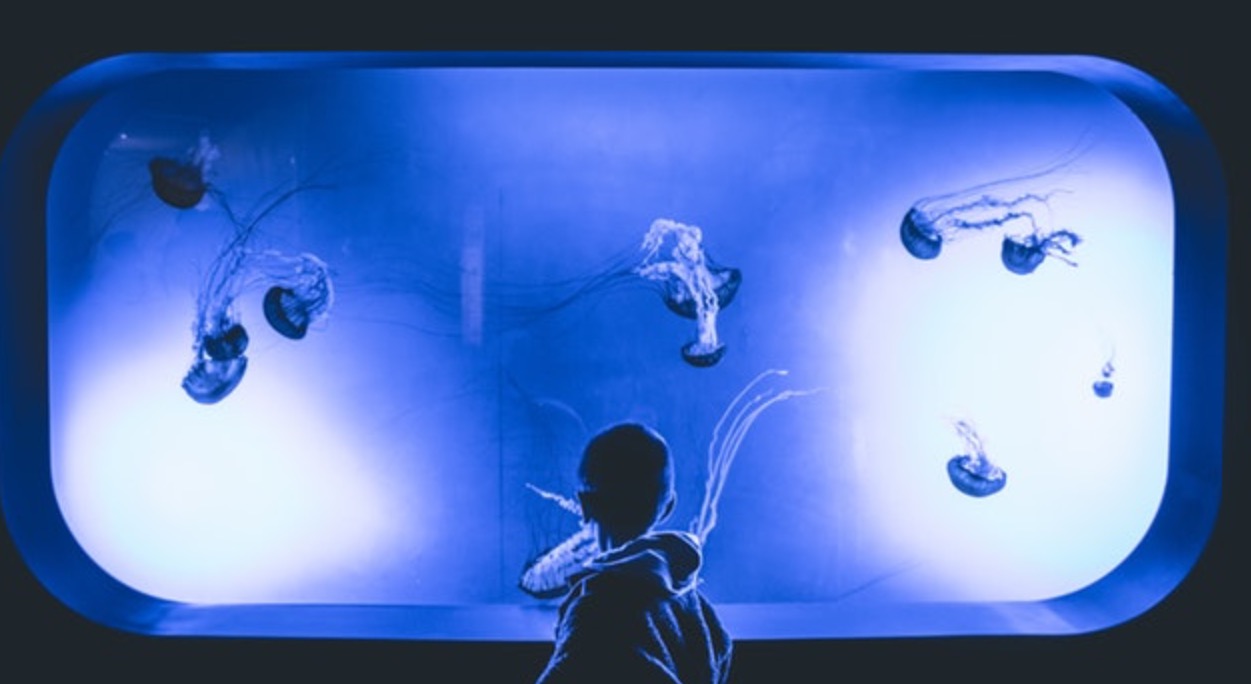 Similarly, the jellyfish may have trouble surviving in the ocean waters if they were transplanted there. Jellyfish Lake has been isolated from outside waterways for hundreds of years. The Jellyfish lived In the ocean in the past, but when the sea level dropped, they were isolated in the lake. They dominated their environment, thus, developing their mild sting.  If they were to be reasserted into the ocean, their sting would not offer much protection from predators, like anemone.

For right now, the golden jellyfish should remain in their lake, and take Robert Frost’s advice that “Nothing gold can stay” – nothing gold can thrive without the tenacity and proper conditions.