When it comes to renewable energy, the sky’s the limit.

That was the philosophy that Bertrand Piccard and André Borschberg adopted over the years they spent researching and developing Solar Impulse, the world’s first experimental zero-emission solar-powered air flight expedition around the globe.

Piccard (a Swiss psychiatrist and balloonist) and Borschberg (a Swiss businessman and jet pilot in the Swiss Air Force) piloted the aircraft’s 17-month multi-phase international journey that spanned approximately 26,718 miles (43,000 kilometers).  The plane concluded its global excursion on July 26, 2016 when it made its descent onto the tarmac of the Al Batin Aiport in Abu Dhabi, ending Solar Impulse’s odyssey in the exact same spot from which it began its around-the-world travels in March 2015. 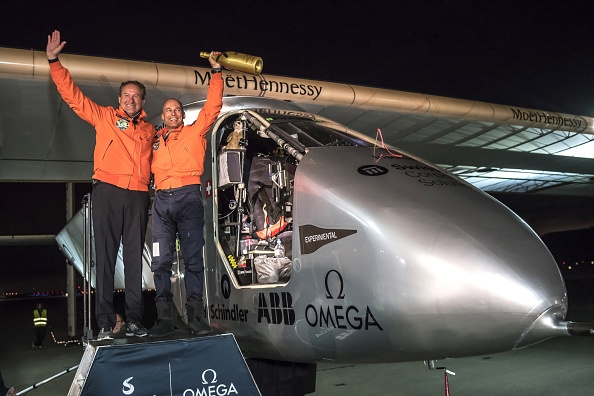 Piccard and Borschberg wave to the crowd as they celebrate their successful flight from Hawaii to California.

The pair emphasized their priorities of exploring the utility of solar power, as well as encouraging the use of electricity over combustion and hydraulics.  An example of this use of electricity can be observed in the 17,248 energy-dense solar battery cells that store power from the sun to operate the aircraft’s super-efficient engine, even once the sun has fallen beneath the horizon.  The Solar Impulse team has proposed that similar engine models can be applied to other motors, while the aircraft’s LED lighting and insulation systems can be implemented as potent and lightweight alternatives in housing. Solar Impulse’s sensors and data collection equipment demonstrate potential benefits for a diverse array of energy management processes.

Though the aviation industry may gradually become introduced to a great deal of Solar Impulse technology, don’t start preparing to book your seats aboard a solar-powered Boeing 747 quite yet. Solar-powered commercial air travel at conventional capacity and speeds has not yet been proven possible.  Solar Impulse can carry a mere one individual (the pilot), and flies at an average of 46 miles per hour (75 kilometers per hour), the speed of a car. According to Dan Rutherford, the International Council on Clean Transportation’s marine and aviation technology program director, the Solar Impulse mission represents a useful envoy to propagate green technology and renewable energy awareness.

Piccard explained that Borschberg and his most recent clean-energy initiative, the International Committee for Clean Technologies, supports Solar Impulse’s legacy to live on for decades to come.

“We have flown 40,000 km around the world without fuel, but there is still a lot to be done to encourage a worldwide implementation of clean technologies and to motivate everyone to reduce their dependence on fossil fuels in their daily lives, hence the creation of the International Committee for Clean Technologies.”

As the transportation industry continues its shift from fossil fuels to renewable sources of energy, both the environment and the economy will be positively impacted, ultimately contributing to our global goal of  greener, cleaner living.

Jordyn Posluns
Jordyn is a recent graduate from the University of Guelph's Biomedical Sciences program, and currently works for Bell Canada Supply Chain.