In America, at the beginning of each school day, students stand with their right hand over their hearts and remove their hats in respect to the flag, and the United States of America in which they pledge their loyalty. They recite the Pledge of Allegiance in unison:

“I Pledge allegiance to the flag of the United States of America and to the Republic for which it stands, one nation under God, indivisible, with liberty and justice for all.”

This pledge of nationalism was written by Francis Bellamy, the associate editor of The Youth’s Companion. He wrote the pledge in response to President Benjamin Harrison’s call for patriotism in schools to help celebrate to 400th discovery of America. Additionally, the owner of the The Youth’s Companion, Daniel Sharp Ford, wanted American flags in every U.S. school following the hostility of the Civil War.

Ford urged Bellamy to create a salute that men, women, and children would preform during the pledge. Each person would extend their right arm forward, angling their hand slightly upward, with their fingers pointing directly ahead. The Pledge and Bellamy Salute were officially published on September 18th, 1892. Subsequently, in 1923 Congress changed “My Flag” to the “United States Flag” to make the speech more American, and to help immigrants identify what flag they were loyal to. 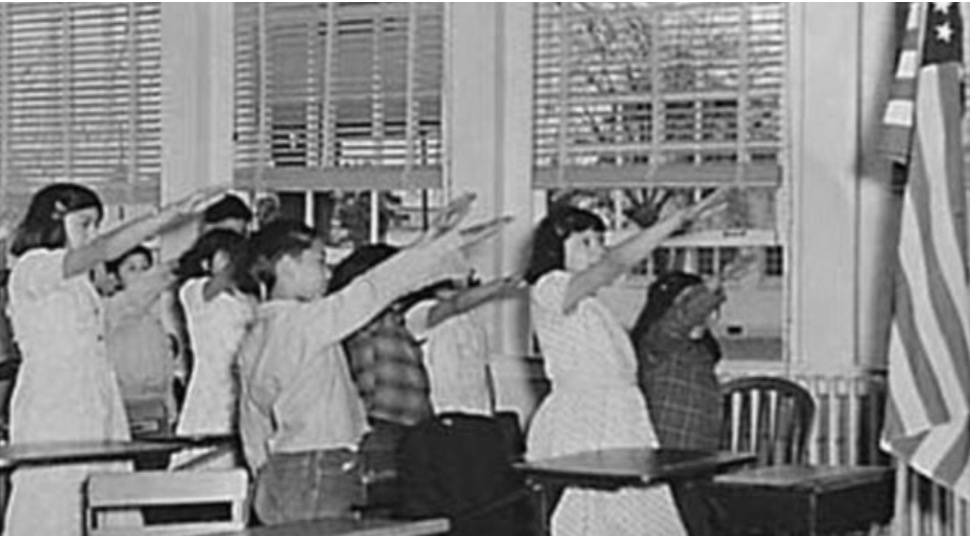 During the second World War, Italians and German Nazis saluted Benito Mussolini and Adolf Hitler with similar movements to the Bellamy Salute. Embarrassed American officials recalled their salute in a law named the National Flag Code. The Code declared that civilians should place their right hand over their heart instead of the Bellamy Salute – reinforcing respect only for America and not enemy countries.

To encourage nationalism during wartime, Paul McNamara, a publicist for Hearst Corporation, created a campaign that raised the Pledge’s visibility even higher. He sold the concept of running American flags in magazines to the National Publishers Association’s 500 members, who printed the stars and stripes on their covers after Pearl Harbor in 1942. Magazines like Vogue, Newsweek, and The New Yorker supported the movement, named United We Stand. 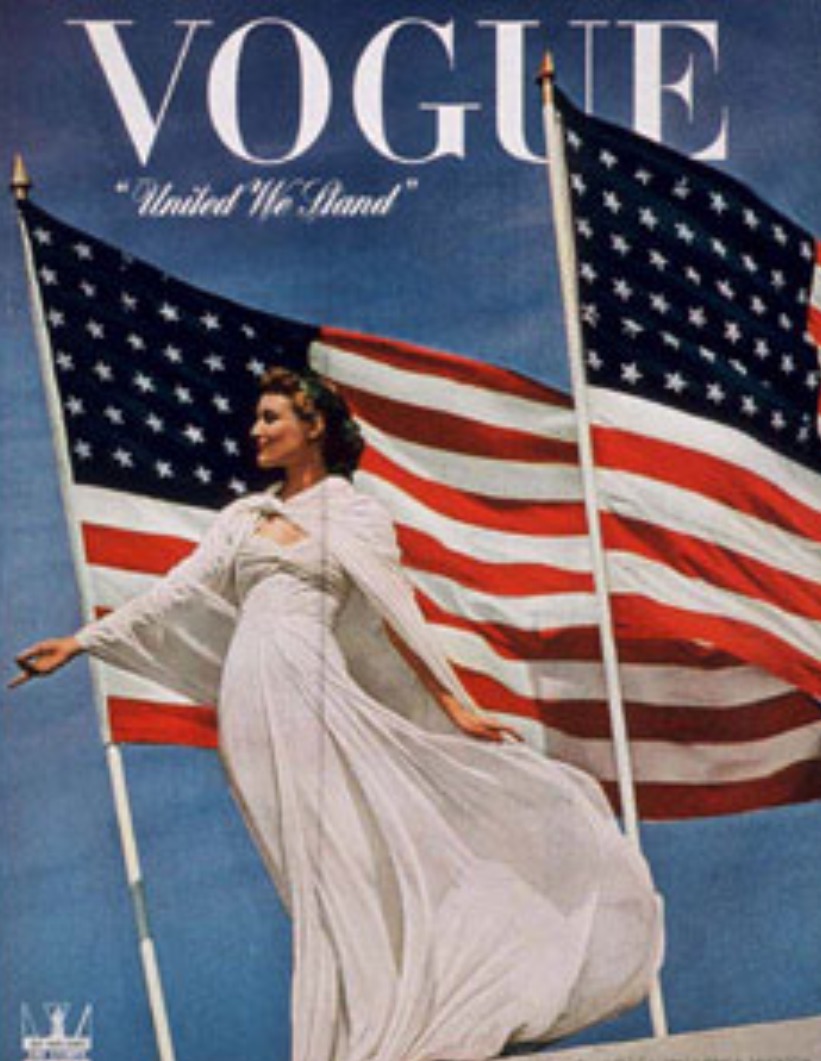 The Vogue Cover for the United We Stand movement (Image Source: AMhistory)

From 1892 until 1943, students were required to salute the flag, or risk expulsion from their school, and delinquency charges. However, in the West Virginia Board of Education v. Barnette, The Supreme Court, in a 6 to 3 decision, ruled that requiring school children to recite the pledge violates the First Amendment. The First Amendment gives all American citizens the right to express their beliefs without government interference.

Now, children enrolled in American public schools choose whether they want to recite the pledge and participate in the nationalism. The concept of the Pledge of Allegiance is unique to the United States. The only other country to recite  their anthem during school hours is Singapore.  In the past, other countries previously sang “God Save the Queen” or recited the Lord’s Prayer on special occasions in a school setting, but this is no longer the case.

The Pledge of Allegiance is something that fills many Americans with pride. We grow up pledging ourselves to our constitution and the honor that comes with being a free nation, and we promise to work to uphold this freedom. The pledge of allegiance is recited from Kindergarten all the way until 12th grade.  American flags adorn almost every area in American schools, including classrooms, computer labs, libraries, and gyms. The pledge of allegiance is typically recited  during the morning announcements, or during homeroom before first period begins. 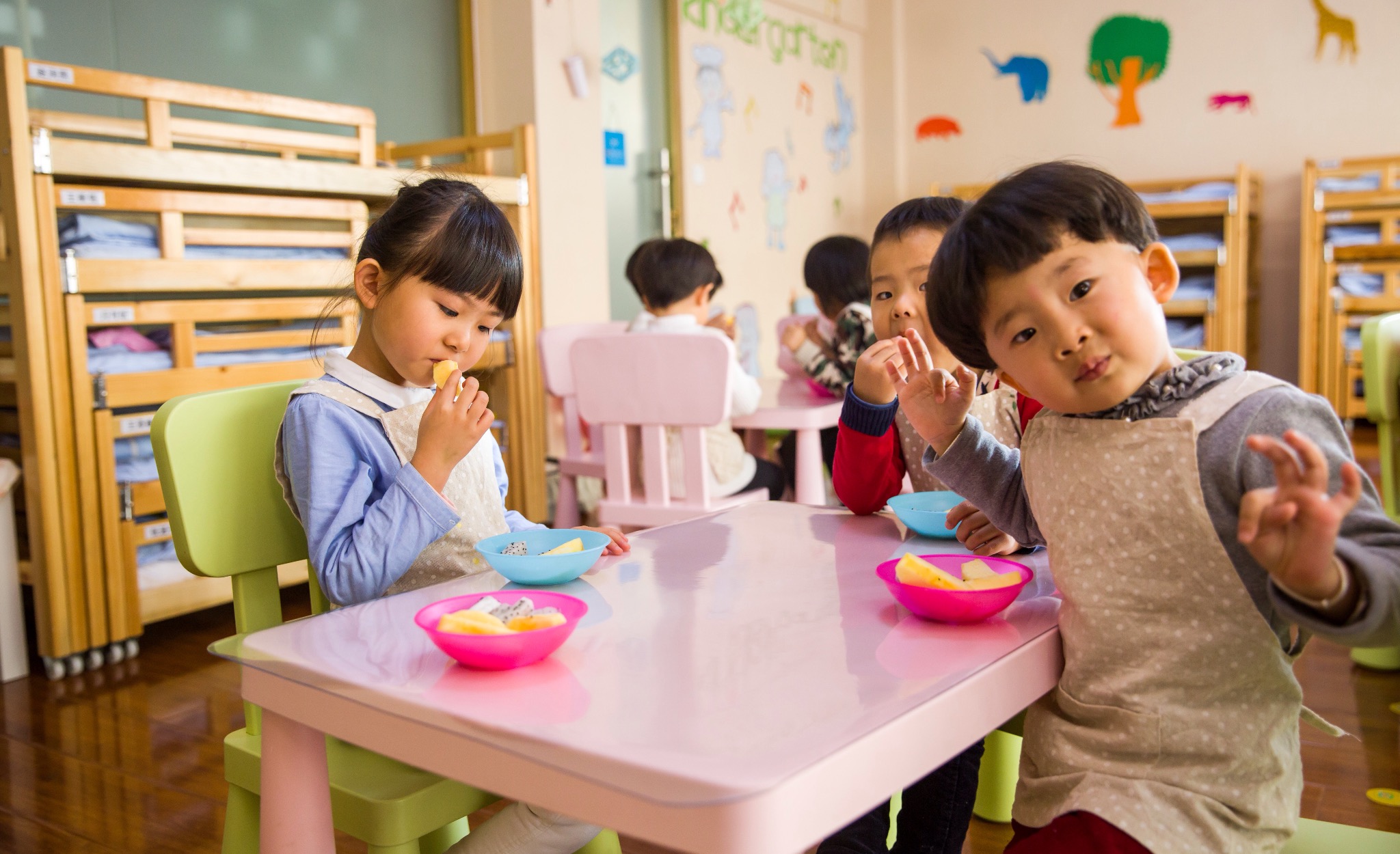 If a student does not wish to recite the pledge, they are to stand like their peers and place their right hand over their heart. They are not permitted to leave their hats on, continue working on school assignments, or scroll through social media during this time, as it is disrespectful. These students are allowed to express their beliefs, and it is socially acceptable to do so in all grade levels, though it is most common in middle or high school. In recent years, more students are choosing to exercise their first amendment rights and stay silent during the pledge.

Students who do not wish to recite the pledge should not be considered unpatriotic, as they have taken care to understand the amendments of the American Constitution, and are exercising their rights as citizens of the USA at a young age. Contemplating and valuing your rights as a citizen of the world is just as important as unenthusiastically reciting a speech with the rest of your classmates.