I don’t know much about serious romantic relationships yet; I’m just starting off high school. But I do know family.

Every Sunday my grandmother and I go for breakfast. I love to hear what she has to say, and I look up to her in a way that I do to no one else. She’s kind and wise and accepts me for who I am, entirely. Our friendship is different than most others, but it’s something I hold close to my heart. She does so much for me, and this is just a little piece of me trying to give back to her through my love of writing (something we do together often). She’s the inspiration behind this. (Basically we were cooking dinner and I was running back and forth writing down what she was saying.)

“Should I cut it all?” I ask as I blink hard, the onion beginning to sting my eyes.

I know she’ll end up chopping the onions, because that’s how it goes. I start something and she finishes it. She’s my grandmother — she’ll always do these things for me. Any discomfort, any hardship; well, we can’t have that! She spoils me and I know it, but that’s how she loves me. So, she ends up taking the task of chopping the onions and I start on something else.

We’re making soup — lentil soup, at that. Ever since I turned vegetarian, she’s had to adjust some of the dishes she used to make.

“I have old taste buds,” she says. Because she truly can’t taste much anymore, but she cooks from memory of how her mother taught her.

So, obviously, she’s mastered lentil soup. While cooking was never my favourite past time, I like it now. Well, sort of. I like cooking with my grandmother. It’s relaxing, and it helps me slow down. Sometimes, when I recognize how hurried I actually am, I realize things seem so fleeting. As a teenager, my day is full of people who are around my age, all energetic and occasionally overwhelming. It’s fast-paced, filled with deadlines and work. We always seem to be rushing and stressed. Sometimes it’s important to slow down and take a breath. With my grandmother, I’ve learned to take things more minute by minute instead of deadline by deadline. It’s relieving. It makes our time special. 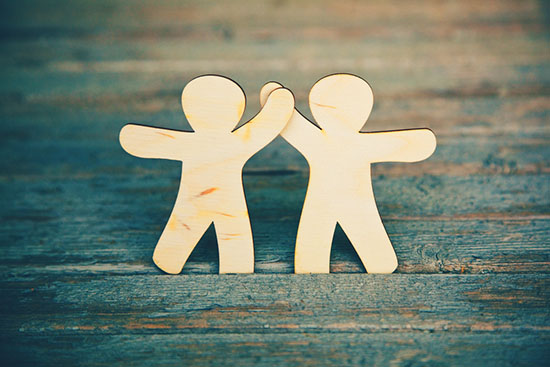 We talk a lot about what we did during the week to stories from before I was born. And I never get bored. I like hearing her stories and what she’s been doing lately. I like knowing what’s going on with her and keeping that connection.

Being a teenager means a lot of things. It’s the time when you explore a bit, find out what you like and what kind of person you might want to be. Being a teenager means the start of separation and independence. For some people being a teenager means rebellion. A stage of rebellion that can, at times, create rifts between yourself and your family. Which, yeah, I get. Family can be annoying because they’re just always there and sometimes you want them to get off your back. Of course, all families are different. I can only speak for mine, because that’s all I know. But I like to stay close to my family, because while they’re annoying, they also help keep me grounded. Having a strong relationship with my family is a reminder that there will always be someone there who will help with my problems (big or little). And if there’s one person who I know will always accept me no matter what — who defended me even when I ate all the cookie dough when I was little… and when I ate all the raspberries just last week — it’s my grandmother. I like spending time with her and making that time in my schedule is important to me. Our relationship is a friendship, one where we talk and laugh and even joke around. And while there’s an assumption that friendship can’t bridge age, I don’t think that’s true for many people.

Still, it’s common to find yourself in friendships with people who are the same generation as you, if not practically equal in age. That’s what we tend to gravitate toward, because meeting with people who are closer in age is generally more convenient (at school, at work.) Most of my friends are teenagers, that’s the truth. But there’s something special in sharing a moment or conversation with someone who is far from the typical friend, especially when there’s a generational gap. They were more likely taught other things, raised a different way — like how my grandmother’s neatness and etiquette reflect the customs with which she was brought up.

“When you were young, what did you want to be?” I said.

She sets the soup to simmer and turns to me.

She’s smart and clever, but would never say so. I think she could have been anything she wanted to be, but I know that when she was young, the societal messages she received were staggeringly different from the messages I receive. I’m told to be bold. She was born in a time where women were limited to roles where there were no expectations for a woman to be successful in careers that were mostly male-dominated. Because of this, she was taught to act very differently than me. She always folds her napkin on her lap and speaks very politely. Her mannerisms are different than mine. But relationships run deeper than things held in common. There’s the way you feel when you’re around that particular person. Being safe and happy and balanced are all parts of a healthy relationship.

My grandmother is also strong and independent. She takes care of her family and friends and I admire her for that. As a girl growing up, I look toward other women as examples of who I want to become. And while she was taught to be gentle, it also presents as kindness and humility. I believe kindness is one of the most valuable attributes to have. I think it’s the basis of a healthy relationship and I want to bear the type of kindness she does. I love to be with her because, of course I just love her, but I love to feel that kindness.

“Actually, I think I wanted to be a teacher. So after all these years, that’s what I’m doing; teaching.” We both laugh.

Though we’re years apart, our relationship is one of the most important in my life right now. She accepts me for who I am. She knows all my flaws, but still believes in the goodness of me. She’s helped me step back and be in the moment. I feel respected, comfortable and worthy when I’m with her. She makes me happy, and that transcends common interests or similar life situations.

The soup’s bubbling now. We’re sitting at the table, waiting, and now that the spices have been added the room smells like thyme and cumin.

I serve us both some soup and we sit at the table. I’m smiling, because I seasoned the soup and it still tastes good. But also because I’m just happy. I look over at her and see she’s also smiling — she’s happy, too.  Our friendship is relaxing and nourishing — just like the soup.