“There are some things you can’t share without ending up liking each other, and knocking out a twelve-foot mountain troll is one of them.” –  J.K. Rowling, Harry Potter and the Philosopher’s Stone (1997)

When the reader is introduced to the main characters in Harry Potter, it is abundantly clear that there are stark differences between each of them. Harry has the burden of fame resting on his shoulders while navigating a world that he had been completely ignorant of for his entire life. Ron Weasley becomes Harry’s first friend and, raised within the wizarding community, also becomes Harry’s guide. But he too has his own insecurities. He comes from an impoverished family of nine, which spurs feelings of insecurity and inadequacy for the young red-head.  Hermione Granger was born to non-wizard, or muggle, parents, but due to her avid reading skills, become the smartest witch in her year. All three come from different upbringings, have different personalities, and initially were not the iconic group that we have all grown up with. In fact, when the three first meet on Hogwarts Express, a train that takes the kids to the enchanted school, the boys are put off by Hermoine’s snobbiness, while Hermoine does not appreciate their easy-breezy personality.  This all changes partway into the first book when Hogwarts throws a lavish Halloween feast,  where rows and rows of delicious food are shared amongst the babbling students. The celebrations stop when a troll enters the school and goes into the girls’ washroom. When Harry and Ron realize that Hermoine had been in the girls’ washroom during this time, they rush over in an effort to save her. After successfully doing so, the three become friends and the “Golden Trio” is born. 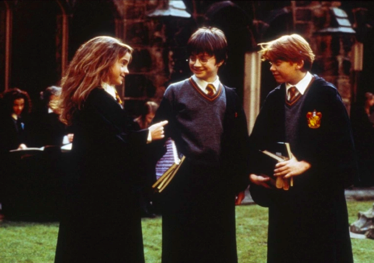 It has been years since I’ve last read any Harry Potter book and I only became reacquainted with the quote when an old friend wrote it into a birthday card. At first glance, I knew it had to do with the series, but I had no idea why she put it in the card until months later. Some of the most beautiful friendships are those that are formed between individuals that would not normally be linked together either because of their personalities, belief systems, or because of what society defines as a “normal friendship”. This can be seen in everyday life, but I will be using the friendship between fmr. Senator John McCain and fmr. Senator Ted Kennedy and the viral video of two toddlers, to expand on this topic.

In today’s world, it’s hard to imagine a time when people across the political spectrum not only got along but saw the other as a valuable member of society. However, Republican fmr. Senator John McCain and Democrat fmr. Senator Kennedy did just that. As Caroline Hallemann writes, when McCain passed away in the summer of last year, President Obama’s speechwriter Cody Keenan recounted a time when he was a Senate intern and met the Arizona senator. 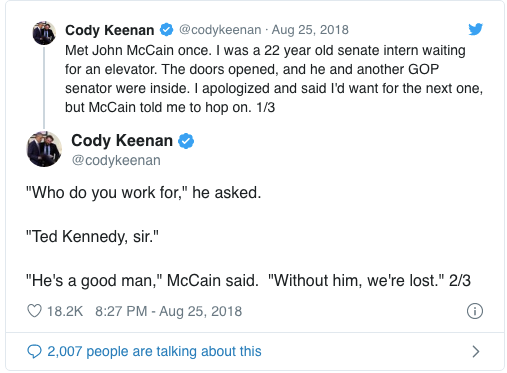 This short exchange not only exemplifies the kind of man McCain was but also showcases an important component to friendship: acknowledging and praising each other’s strengths. It’s not just that he called Kennedy a “good man” but also that he acknowledged how valuable the senator was by claiming that the Senate and America as a nation would be “lost” without him. This is especially poignant because of the different political backgrounds the gentlemen represented. Kennedy and his family were a part of the Democratic party, while McCain was seen by many as a beacon of reason and understanding in the increasingly changing Republican party. This friendship and respect for one another spilled into politics as the two men introduced the Secure America and Orderly Immigration Act. Although it was not passed by Congress, new bills have been brought forward in an attempt to create comprehensive immigration reform that both sides of the political aisle could support – something started by Kennedy and McCain.

Many of us have an image in our head when we think of what can be considered as a ‘good friendship’. Smiling people who never fight or raise their voices at each other may come to our mind. If the relationship between Kennedy and McCain shows anything it is that people don’t always have to get along or believe in the same values to have a good friendship; but to be willing to get into a fight when necessary, and to see the fun in the fight. A good friendship is defined by whether or not the individuals are willing to deliberate, listen, to each other in order to get a solution.

Other times, tender moments between friends can exhibit how far society has come and the everlasting truth that love can and will beat hate even when the latter seems to be louder. A clip of two-year-old Maxwell Cisneros, a young white American boy, running towards his best friend, Finnegan, a little African American boy went viral a few months ago for this reason. The two toddlers spot each other from opposite ends of the sidewalk, run towards each other and embrace before running towards Maxwell’s father.

The United States has a long, complicated history with racism between whites and blacks that did not end with the Emancipation Proclamation. No, racism is a plant that has its roots tightly wrapped around the core of American identity. Though slavery was abolished, it’s legacy, the institutionalized racism, the oppressive systems, are entrenched in American society. Many abolitionists questioned what would happen to the freed slave. Some suggested sending them back to Africa. Abraham Lincoln, a man known to many as the person who “freed the slaves” and a bright light towards the goal of equality, actually created a plan where America would colonize Haiti and Liberia in order to send the slaves there. This plan was deemed unsuccessful and segregation laws were put in place.

According to History.com, there was a wide range of segregation laws that were created in the 18th and 19th centuries that affected the well-being of African Americans well into the present day. It affected every aspect of life: housing, education, and public services. America’s legal system tried to block the opportunities of African Americans. Young black children were not allowed to go to school with white children up until the Supreme Court ruled it unconstitutional in 1954 with Brown v. Board of Education.  Although this may seem like a victory towards racial equality, local courts formed their own opinions and accordingly allowed some school boards to go against desegregation. Real change did not occur until the Civil Rights Act in 1964.

America, although it frames itself as a country of substantial freedom, is a country that built itself on the backs of those who were not free. Those who were seen as “property”. The same way a farmer may think of his cattle. So although this 30-second video of Maxwell and Finnegan does not wash away the years of oppression and hurt that was done to the African American community by White Americans, it does serve as a reminder of a famous Nelson Mandela quote that reads:

“No one is born hating another person because of the color of his skin, or his background, or his religion. People must learn to hate, and if they can learn to hate, they can be taught to love, for love comes more naturally to the human heart than its opposite.” – Nelson Mandela, Long Walk to Freedom

There is hope in the understanding that something like hatred is taught. And that is what friendship offers us: hope. By befriending someone from a different race, religion, sexual orientation, etc. you learn more about their lives. What makes them happy, what angers them. And more importantly, you learn the why. By doing so, the hatred or fear that was taught to you by authority figures (teachers, parents, etc.) disappears.  Love people fully, and in doing so, you knock down those oppressive institutions and belief systems that have been long held up. 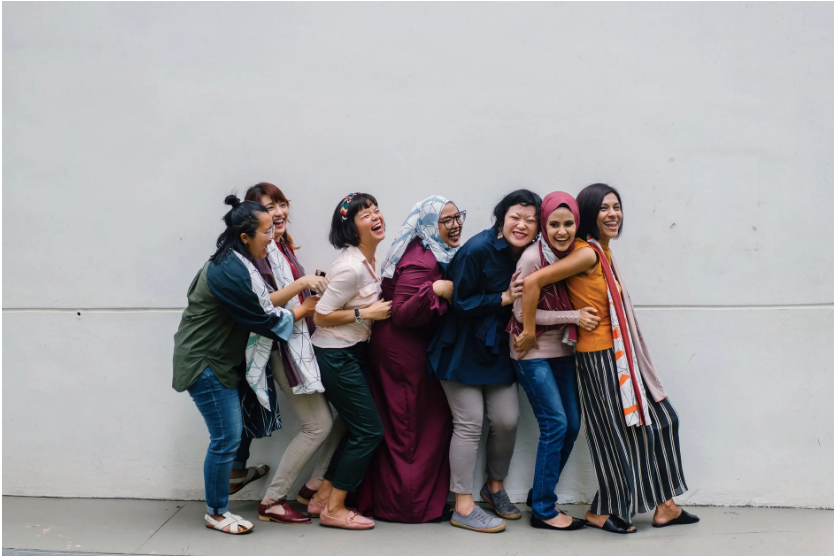 As I said earlier when I first read the Harry Potter and the Philosopher’s Stone quote that was written on my birthday card I was quite confused. The more I read it the more I began to understand how poignant it is. Having an individual to turn to when life seems burdensome, when you are sick with worry, or when the path ahead seems dark, often times provides us with a feeling of strength and comfort. Having a friend there to hold your hand and make it clear that they are on the journey with you not only makes one feel better about their chances of survival but bridges the gap between the two where a greater understanding of each other’s perspectives and voices can be heard. This is especially true when the friends come from different backgrounds or believe in different ideologies as their pathways to reach the “light at the end of the tunnel” may be different. After all, life’s challenges, or in Harry, Ron and Hermione’s case, the “twelve-foot mountain troll”, can turn into great adventures filled with learning opportunities; an exciting experience when you have loving people around you.